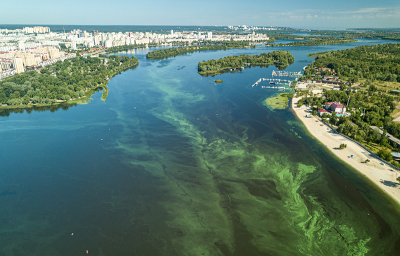 A new mass spectrometry method to detect early signs of harmful blue-green algae, which bloom in lakes, rivers and reservoirs around the world, has been developed by researchers at the University of Birmingham together with researchers at the Culture Collection of Algae & Protozoa (CCAP), based at the Scottish Association of Marine Science.

Blue-green algae, or cyanobacteria, present huge environmental problems. Large scale break-outs, or blooms, spread across bodies of water, depleting the oxygen supply and reducing light, killing fish and other aquatic animals. In addition, some algae can produce toxins that are harmful to animals and humans. Detecting these blooms—at a sufficiently early stage to prevent them reaching dangerous levels—is not straightforward because of the thousands of different species of algae that could be present. As algae are a vital part of many water systems, it is only those species which become harmful that may need these preventative measures.

Researchers in the University of Birmingham’s School of Biosciences have designed a new approach using native mass spectrometry to identify key protein features within the algae that are unique to each species, enabling them to be rapidly identified. Using recently developed, high-resolution techniques, the team found they were able to produce highly specific fingerprints that each correspond to specific cyanobacterial species. The technique is also successful in identifying combinations of different cyanobacteria at low pre-bloom concentrations. This means that the cyanobacteria can be identified before significant quantities of blue-green algae have developed.

Lead author, Dr Aneika Leney, explained: “This is an exciting first step towards developing useful tools that can be used to keep harmful blue-green algae blooms at bay, while leaving non-toxic species untargeted.”

Future work to develop this technique would involve creating a large database of spectral fingerprints for all the different cyanobacteria species currently known. Thus, when a match is found, the species can be identified rapidly. The technique can also be used to check the authenticity of cyanobacterial products, such as spirulina extracts, that are consumed as health and food supplements.