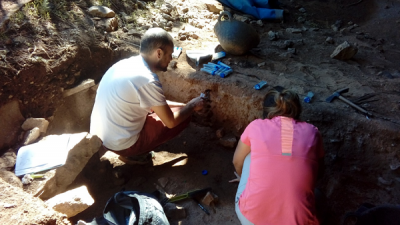 The research group led by Gianni Gallello, from the Department of Prehistory, Archaeology and Ancient History of the University of Valencia, has used the analysis of rare earth elements by mass spectrometry for the first time to find human activity in a prehistoric cave. Through the analysis of the archaeological strata, with chemical methods, it has been possible to interpret the occupation and uses of the Cocina Cave (Dos Aguas). Previously, the Department of Analytical Chemistry (ArchaeChemis) group tested it in deposits in Ethiopia and Tanzania.

Rare earth elements are common chemical elements in the Earth’s crust whose importance as a strategic resource has been growing in recent years, since they are essential for the development of new technologies. Gianni Gallello specialises in the analysis of the use of rare soils as an indicator of human activity. A multidisciplinary team led by Gallello, made up of researchers from the Department of Prehistory, Archaeology and Ancient History and ArchaeChemis, together with specialists from the British Geological Survey and the University of California (Santa Barbara), has used for the first time the analysis of these elements to study human activity in a prehistoric site.

“To determine these elements, mass spectrometry has been used from samples taken from archaeological sediments, digested with an acid solution, to later be able to study their proportions and concentrations,” explains Gallello. This analysis in archaeological deposits has been developed by the ArchaeChemis multidisciplinary unit over the last 10 years and has been tested in Ethiopia, Tanzania or the Vall del Serpis (Alicante).

The new study addresses information from a prehistoric site, Cocina Cave (Dos Aguas), recently excavated by the University of Valencia and the SIP (Museum of Prehistory of València) under the direction of Oreto García Puchol, Sarah McClure and Joaquim Juan Cabanilles. The long sequence of human presence (8500–4000 BC) includes mainly evidence of activities related to hunting, gathering and ranching.

“In this study, rare soil elements and stratigraphic information were used together with other archaeological markers. Thus, the concentrations and proportions of these elements are very consistent with the archaeological interpretation. Our studies show that lands can be very useful in identifying whether the formation of soils or archaeological strata is related to natural processes or anthropic activities,” said Gianni Gallello.