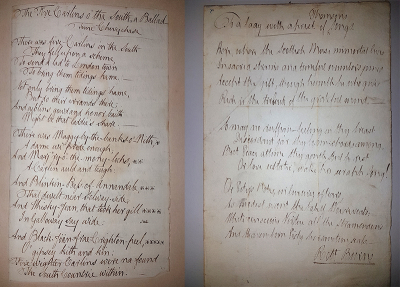 Authenticating historic manuscripts can be a complicated and at times destructive process, with parts of the paper or ink damaged. However, a cross-disciplinary team of researchers from the University of Glasgow, UK, have found a novel way to accurately authenticate ancient documents in a minimally destructive way.

The findings, published in Scientific Reports, use direct infusion mass spectrometry, which enables minimally destructive sample extraction directly from the paper surface. The team analysed the ink and paper of both authenticated and forged Robert Burns’ manuscripts to produce a support vector machine (SVM) classifier that could accurately distinguish true Burns handwriting from the fakes. The scientists were also able to distinguish which inks Burns used to write each of his poems, whether it be ivory black, iron gall or a mixture of the two.

The project and findings are the result of collaboration between Dr Karl Burgess of the University’s Glasgow Polyomics and the School of Critical Studies, led by Professor Gerard Carruthers, Francis Hutcheson Chair of Scottish Literature. With the help of Burns collector Dr William Zachs, the team were able to look at originals and fakes to ascertain the type of ink used, helped by a handwritten book owned by Dr Zachs which contained recipes for all sorts of liquids, including inks.

In total, the team tested 12 documents; three real Burns’ documents selected from different periods of the bard’s life and nine fakes from the 1890s by notorious forger Alexander Smith. The scientists were able to lift ink from the copies using a simple pipetting process that could be performed outside the laboratory, and that crucially did not visibly damage the original material. Tests were initially performed on one of Alexander Smith’s handwritten 150-year old fakes before being performed on real Burns material.