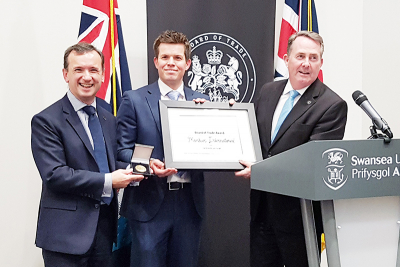 Markes International’s success in exporting scientific instrumentation has been rewarded with an accolade from the UK’s Department for International Trade (DIT). The Board of Trade Awards, which are nominated and selected by the DIT, were this year awarded to eight Welsh businesses showing exceptional innovation, delivering prosperity to their local communities and championing free trade. The judging panel were “particularly impressed with Markes International’s fast growth and recent expansion into China”, and recognised the company “as a strong example of overseas development, and for its utilisation of the tools available to push into new markets.”

This year’s awards were presented by The Rt Hon. Dr Liam Fox MP (Secretary of State for International Trade and President of the Board of Trade) and the Rt Hon. Alun Cairns MP (Secretary of State for Wales), at an event at Swansea University on 15 November 2018. In presenting the award to Markes’ Managing Director Tim Hawkins, Dr Fox said “I wish all of our companies were like Markes International”.

Hawkins commented “We are very proud to have received this award from DIT, and believe it stands as a testament to the many years of effort we have devoted to strengthening the profile of our analytical instrument business overseas.”

“It is particularly gratifying that the judging panel have recognised our efforts in Chinese markets, which remain a core focus of our efforts. As an illustration of our expansion in this region, our overall sales in China have doubled over the last three years, and earlier this year we opened a technical support centre in Shanghai to support our growing customer base in the country.”