Life on Mars? Laser desorption MS may provide the answer 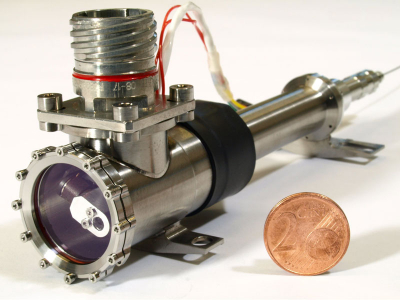 Europe is getting ready for its first unmanned visit to the surface of Mars. The first European Mars Rover on a joint mission of the American and European space agencies, NASA and ESA, will take off in 2018. The 250 kg Rover will roll over the surface of Mars at a speed of 100 m per hour. While doing so, it will inspect the surface and gather up ground and rock samples, some of them up to 2 m deep. The main goals of the so-called EXOMARS mission are to search for traces of former or present life on the earth-like planet, and to prepare for the arrival of a manned Mars landing.

One of the central analytical instruments on the EXOMARS Rover is the Mars Organic Molecule Analyser (MOMA). MOMA will help with the search for traces of life, by identifying organic materials and analysing them. If organic molecules like hydrocarbons are found, they might point to possible forms of life on Mars.

One of the core components in the MOMA is a laser desorption mass spectrometer suited to travel in space, which includes a diode-pumped, solid-state laser in the UV spectrum. Using laser desorption, it is possible to bring non-vaporisable molecules in a gas phase, and make them slightly ionised, so they can be detected in a mass spectrometer. To achieve this, a compact, pulsed laser with a radiation wavelength of 266 nm is needed, with a laser pulse energy of more than 250 µJ. Such a laser system, which is also suitable for travel in space, is currently not available.

In order to use this technology, the Space Technologies Group in the Laser Development Department of the Laser Zentrum Hannover (LZH), Germany, has received funding from the national “exploration of outer space” programme. The current project aims at optimising an existing laser system prototype and making it ready for the mission by 2014.

Around 3 million Euros will be going to the LZH for further development and qualification of the laser desorption mass spectrometer, which is being constructed under the leadership of the Max Planck Institute for Solar System Research (MPS). The core job of the LZH is to develop and construct the actual solid-state laser head. The technical requirements for use in outer space are very high. Dr Jörg Neumann, project leader at the LZH explains, “The high temperature changes between night and day on Mars are a real problem. On top of that come the mechanical vibrations on the way to Mars and cosmic, ionising radiation. The real challenge is, that the laser must be rugged enough to withstand these elements, but at the same time light, small and compact.”

Scientists in the Laser Development Department are working on a passively Q-switched Nd:YAG oscillator, which is pumped longitudinally using optical fibres. With the help of non-linear crystals, the infrared light of the oscillator is transformed into ultraviolet light. Thermal controls guarantee that this system functions despite changing surrounding temperatures.

Dr O. Roders is the project leader for the MOMA instrument at MPS in Katlenburg-Lindau in Lower Saxony, the partner working together with the LZH. He sees the cooperation with the Laser Zentrum as an excellent combination of know-how. “The absolute specialists for the necessary UV laser technology are working in Hannover”, he says. “Our experience is necessary for the suitable laser electronical parts that have to withstand the most harsh conditions in space.”

Several years of intensive development are still necessary before the group has completed a model suitable for use in space, but first investigation with a prototype are very promising: the laser head has already successfully withstood ionising radiation, vibrations and a thermal-vacuum test.