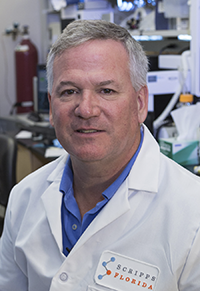 An international collaboration including scientists from the Florida campus of The Scripps Research Institute (TSRI) has used hydrogen–deuterium exchange mass spectrometry to determine the structure of a plant hormone that plays a crucial role in regulating plants’ responses to insects and disease-causing microorganisms as well as normal growth and development.

The new study, published in Nature, focused on a plant hormone called jasmonate and two proteins involved in its molecular signalling, MYC and JAZ. Previous attempts to determine a three-dimensional picture of this interaction were frustrated when scientists had great difficulties forming crystals of MYC and JAZ bound to one another—a necessary step to determine molecular structure using X-ray crystallography.

“The outstanding question answered in the study is why the protein complex crystallisation between MYC and the JAZ motif was so difficult, given the binding affinity is so tight,” said Patrick R. Griffin, chair of the Department of Molecular Therapeutics and director of the Translational Research Institute at Scripps Florida. “As a collaborative effort, the study revealed structural intricacies in the MYC factor that are highly flexible.”

Griffin’s laboratory has expertise in hydrogen–deuterium exchange mass spectrometry (HDX), which can examine alterations in the dynamics of proteins and how these changes relate to protein function. With the help of HDX, the team was able to show that the structural conformation of the MYC factors changes profoundly when bound to one of the JAZ repressors. This key finding led to the making of a JAZ–MYC fusion construct, resulting in high quality crystals.

“Although the solved crystal structure of the MYC transcription factor in question only captured a snapshot of a favoured conformation, it does explain nicely how the JAZ acts as a dual repressor/activator switch to the MYC,” said Vinh Q. Lam, a senior research associate in the Griffin lab who worked on the study. “The HDX studies indicate that, in solution, the regions occupied by JAZ are highly dynamic.”

Whether this flexibility is required for downstream function is not yet clear. Thus, future studies will include multiple components in experiments to elucidate the jasmonate signalling pathway.