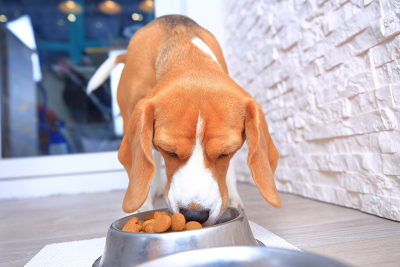 Dogs aren’t usually known for being fussy about their food, but some can be picky eaters. Perhaps their sensitivity noses have something to do with it? Researchers have reported results from a pilot study in the Journal of Agricultural and Food Chemistry in which they identified key aroma compounds in dog food that seem to be the most appealing to canines.

It appears that, for dogs, palatability depends on a food’s appearance, odour, taste and texture—just as it does for people. Previous studies have suggested that odour is especially important for dogs. Some scientists have identified volatile compounds in dog food, but not much is known about how specific aroma compounds influence how readily the dog eats the food. Maoshen Chen and colleagues wanted to identify the key aroma compounds in six dog foods and correlate the compounds with dogs’ intake of the foods.

The researchers began by feeding six adult beagles one of six foods for one hour each and determining how much the dogs ate. The intake of three of the foods was two to four times higher than that of the other three foods. Using GC-MS, the researchers found that 12 volatile aroma molecules were correlated, either positively or negatively, with the beagles’ intake of the six foods. Then, the researchers added each aroma compound to an odour-less food and gave the beagles a choice between food containing one of the compounds and the odour-less food itself. From these experiments, the team determined that the dogs preferred food containing (E)-2-hexenal (which humans associate with an unpleasant, fatty odour), 2-furfurylthiol (sulfury, roasted, smoky odour) and 4-methyl-5-thiazoleethanol (meaty odour). In contrast, the dogs didn’t care for food containing (E)-2-octenal (a slightly different unpleasant, fatty odour). Although other dog breeds and more subjects should be tested, these results could help manufacturers formulate more palatable dog food, the researchers say.