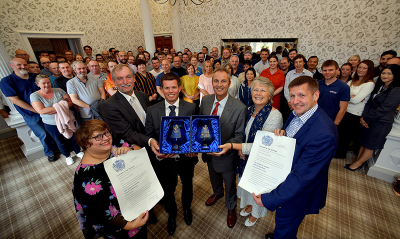 Markes International has officially received its two Queen’s Awards for Enterprise. Markes is one of only of ten Welsh companies to receive an award and one of only six British companies to be recognised in two categories. The Awards were presented by the Lord Lieutenant of Mid Glamorgan, Professor Peter Vaughan, QPM, CStJ, DL, who said: “I was absolutely delighted to present the Awards on behalf of Her Majesty The Queen. It truly is a pleasure to see such an innovative, hard-working and successful company be given the acknowledgement they deserve.”

Markes received awards in the “Innovation” and “International Trade” categories; in 2015, the company also received a Queen’s Award for International Trade. The switch-valve, that is the subject of the Innovation award, was developed and patented by the company in the late 1990s, and is used to regulate flows of gas into and out of a precision-engineered “focusing trap”, with the ultimate aim of collecting, concentrating and identifying the volatile chemicals present. The combined operation of the valve and trap allows ppb amounts of chemicals to be detected routinely.

The Llantrisant workforce went to the presentation ceremony, which was held at the nearby Hensol Castle. Markes’ Managing Director, Tim Hawkins, said: “Winning these two awards simply couldn’t have been achieved without the dedication and hard work of all our employees, so we wanted to be sure as many as possible were part of the formal presentation.”

Alun Cole, Founding Director of Markes International, added: “We have always been, and continue to be, an innovative company, and are therefore very proud to have received these Queen’s Awards. They stand as testament to our excellence in analytical chemistry—both in our technical innovation, as well as our success in satisfying our customers globally.”