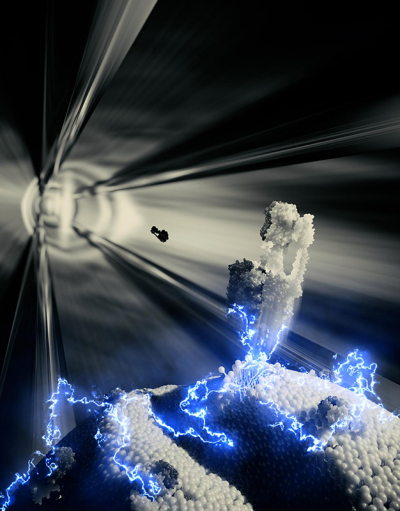 The development of a new technique to analyse cell membrane proteins in situ was made as part of an international research collaboration, led by Oxford University, alongside peers including Imperial College London. The technique could dramatically affect our understanding of both how cell membrane complexes work, and in the process, our approach to healthcare research. This research, published in Science, will enable the development of mass spectrometry in biology to be taken to a new level, enabling new discoveries that would not have been possible before.

Studying these membrane-embedded machines in their native state is crucial to understanding mechanisms of disease and providing new goals for treatments. However, current methods for studying them involve removing them from the membrane, which can alter their structure and functional properties. Lead researcher Professor Dame Carol Robinson, Professor of Physical Chemistry at Oxford’s Department of Chemistry, said: “For decades, scientists have had to extract these proteins from their membranes for their studies. But imagine what you might discover if you could get proteins straight from the membrane into a mass spectrometer?”

“I wasn’t sure this would ever work; I thought the membrane environment would be just too complicated and we wouldn’t be able to understand the results. I am delighted that it has because it has given us a whole new view of an important class of drug targets.”

The technique involves vibrating the sample at ultrasonic frequencies so that the cell begins to fall apart. Electrical currents then applied an electric field to eject the protein machines out of the membrane and directly into a mass spectrometer. Not only did the membrane protein machines survive the ejection; the analysis also revealed how they communicate with each other, are guided to their final location and transport their molecular cargo into the cell.

Professor Steve Matthews, from the Department of Life Sciences at Imperial, said: “With the development of this method, the application of mass spectrometry in biology will be taken to a new level, using it to make discoveries that would not have been possible before.”

Dr Sarah Rouse, also from the Department of Life Sciences at Imperial, said: “A longstanding question on the structure of one membrane machine from mitochondria has now been solved using this technique. Mitochondria are particularly interesting because there are several diseases that target them specifically, that we may now be able to design new therapies for.”

Of the study’s potential impact Professor Dame Robinson added: “The results are particularly exciting for mitochondrial membranes—we managed to catch a translocator in action—passing metabolites. Because mitochondrial therapeutics target a wide range of debilitating diseases, we now have a new way of assessing their effects.”