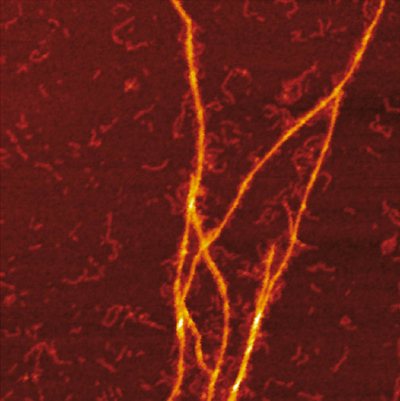 A research team lead by Ludmilla Morozova Roche of Umeå University, Sweden, has provided the mechanistic insight into protein co-aggregation in Alzheimer’s disease. The templating mechanism of S100A9 amyloids on Aβ fibrillar surfaces during co-aggregation process was revealed by synergy of biophysical methods including charge detection mass spectrometry, microscopy, kinetic and microfluidic analyses.

Amyloid formation is of the key clinical significance, since this process is involved in numerous neurodegenerative diseases such as Alzheimer’s, Parkinson’s and others. These diseases affect millions of the aging population world-wide. Often it is difficult to draw the line between these diseases or they may occur simultaneously, which is known as disease comorbidity.

While the amyloid formation process was studied extensively, little is known about the specific mechanisms of co-aggregation of different amyloid species together, underlying the comorbidity of the diseases. In Alzheimer’s disease, the amyloid-neuroinflammatory cascade is manifested in co-aggregation of Aβ with proinflammatory S100A9 protein, which leads to intracellular and extracellular amyloid assembly, amyloid plaque depositions and cellular toxicity.

Deciphering the interactions between proinflammatory S100A9 protein and Aβ42 peptide in Alzheimer’s disease is fundamental since inflammation plays a central role in the disease onset. Here the researchers used charge detection mass spectrometry (CDMS) together with biophysical techniques to provide mechanistic insight into the co-aggregation process and differentiate amyloid complexes at a single particle level. Combination of mass and charge distributions of amyloids together with reconstruction of the differences between them and detailed microscopy reveals that co-aggregation involves templating of S100A9 fibrils on the surface of Aβ42 amyloids. Kinetic analysis further corroborates that the surfaces available for the Aβ42 secondary nucleation are diminished due to coating by S100A9 amyloids, while the binding of S100A9 to Aβ42 fibrils is validated by a microfluidic assay. The researchers demonstrate that synergy between CDMS, microscopy, kinetic and microfluidic analyses opens new directions in interdisciplinary research.

The work was published in Chemical Science.