3D-printed spectrometer: how small can you go? 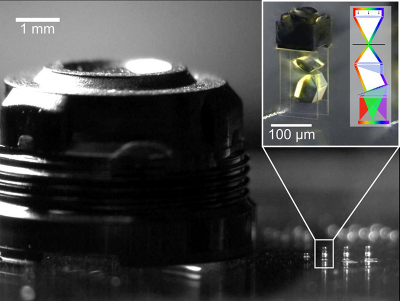 Femtosecond direct laser writing as a 3D printing technology has been one of the key building blocks for miniaturisation in modern times. It has transformed the field of complex microoptics since the early 2000s. Medical engineering and consumer electronics have benefitted from these developments. It is now possible to create robust, monolithic and nearly perfectly aligned freeform optical systems on almost arbitrary substrates such as image sensors or optical fibres.

Simultaneously, the miniaturisation of spectroscopic measurement devices has been advanced, for instance based on quantum dot or nanowire technology. These are based on computational approaches, which have the drawback of being calibration sensitive and require complex reconstruction algorithms. Now, a team of scientists, led by Professor Alois Herkommer and Professor Giessen from the University of Stuttgart, have demonstrated an angle-insensitive, 3D-printed miniature spectrometer with a direct separated spatial–spectral response. It has a volume of less than 100 × 100 × 300 μm3. 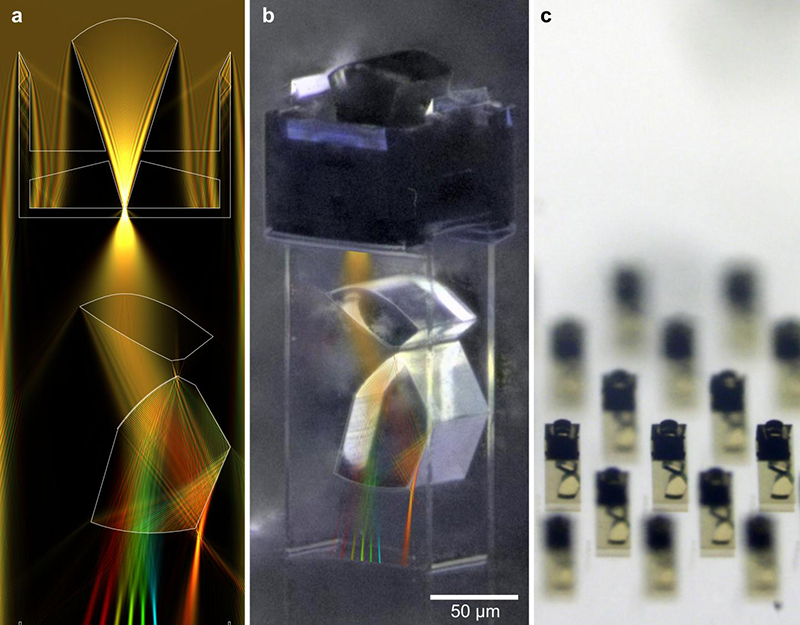 The design is based on a classical grating spectrometer and was fabricated via two-photon direct laser writing combined with a super-fine inkjet process. Its tailored and chirped high-frequency grating enables strongly dispersive behaviour. The miniature spectrometer features a wavelength range in the visible from 490 nm to 690 nm. It has a spectral resolution of 9.2 ± 1.1 nm at 532 nm and 17.8 nm ± 1.7 nm at 633 nm. First author Andrea Toulouse commented on its potential.

“With its volume of less than 100 × 100 × 300 μm3 we explore a whole new size range for direct spectrometers. An order of magnitude this small could only be realised by computational approaches until now. In contrast, we translate the spectrum directly into a spatially encoded intensity signal which can be read out with a commercial monochromatic image sensor. For 3D-printed microoptics, the complexity of the optical design marks an innovation. Refractive, diffractive and spatially filtering elements have never been combined in such a small volume to create a complex and monolithic measurement system.”

“Our spectrometer could be fabricated directly on a miniature image sensor as the tip of a distal chip endoscope. This way, regions in the human body could be examined with extremely high bending radii that were not accessible before. It could also be an interesting approach for hyperspectral imaging where the spectrometer would be used as a unit cell (macro pixel). The redistribution of spectral energy instead of high-loss Fabry–Perot-filtering could thus enable highly efficient hyperspectral imaging sensors. The ever-growing world population could benefit from such a camera if it was used for spectral mapping in precision farming, for instance.” 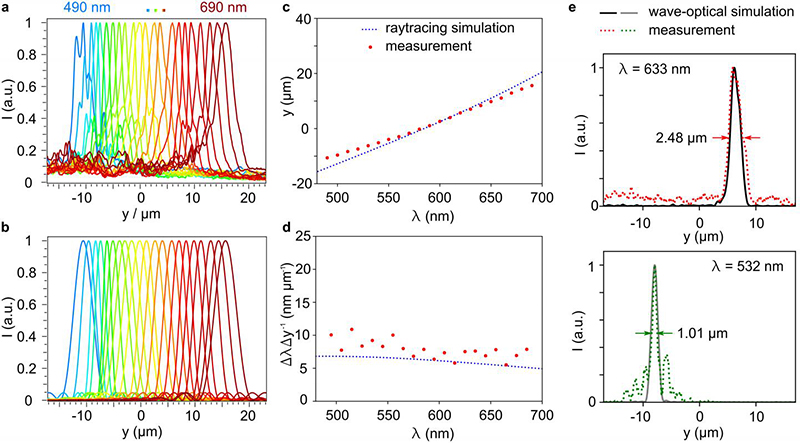 a,Measured normalised intensity profiles at the image plane of the spectrometer for illumination wavelengths ranging from 490 nm to 690 nm in 10 nm steps. b,Sinc² fits of the intensity profiles from a. c, Centre positions of the sinc² fits per wavelength. d, Wavelength shift per µm deduced from c. e, Linewidth simulation and measurement with a red or green laser, respectively. The measured full width at half maximum is indicated with a pair of arrows. The combination of measurements d and e yield a spectral resolution of 9.2 ± 1.1 nm at 532 nm and 17.8 ± 1.7 nm at 633 nm wavelength. Credit: Andrea Toulouse, Johannes Drozella, Simon Thiele, Harald Giessen, and Alois Herkommer

Non-linear techniques for the XUV
26 January 2021