X-ray fluorescence applications to art and cultural heritage: study of a Japanese print

Scientific studies of artworks are an important practice in many institutions dedicated to the study and protection of cultural heritage. Applied physics and chemistry provide the scientific data necessary to characterise and understand the origin, the degradation processes and the environment in which the artwork was created or has existed.

The major requirement for an analytical technique employed in the study of objects of important historical value is the ability to perform non-destructive analysis. Energy Dispersive X-ray Fluorescence (EDXRF) is a perfect tool to study the elemental composition of these artworks because it allows the analysis of the piece as it is, without the need for sampling and without causing damage.

Another issue in the Cultural Heritage field is that there are numerous objects that cannot be moved from their original location due to their weight and dimensions, or because of their value. The need to analyse such objects gave rise to the development of portable EDXRF spectrometers, which allow in situ analysis and that are in widespread use nowadays.

For analytical purposes, X-rays may be generated in several ways, and one of them consists of exposing a certain material to a primary beam of X-rays to generate a secondary beam of X-ray fluorescence. X-ray sources often produce both continuum and characteristic spectra, both being important in the analysis procedure. Continuum radiation is also called Bremsstrahlung and it is the radiation that arises from the retardation of the accelerated electrons impinging on the anode, inside an X-ray tube.

In an X-ray tube, the electrons are produced by thermo–ionic processes at the cathode, and accelerated towards a metal anode by a high voltage difference between them. When electrons impinge on the anode, part of the energy is converted to X-rays and the result is a continuum spectrum superimposed on which is a line spectrum characteristic of the anode material.

X-ray fluorescence analysis is both a qualitative and quantitative analytical method; it can be applied to the identification of practically all elements with atomic number Z > 11. The principle of this method is very simple. The X-ray beam originating from the X-ray source is used to ionise an inner shell, normally the K shell, of the atoms of any given sample. These ions with a “hole” in the inner K shell want to restore their original configuration, and this is done by transferring an electron from an outer shell, such as the L shell, to the inner shell. An L shell electron has a higher energy than a K shell electron, and when a transition occurs the difference in energy can be emitted as an X-ray photon. In the spectrum, this is seen as a line. Each atom has its specific energy levels, so the emitted radiation is characteristic of an element. An atom emits more than a single energy (line) because different holes can be produced and different electrons can then occupy them. The collection of emitted lines is characteristic of the element and can be used to identify its presence.

Pigment identification on artworks such as paintings, frescoes, and ceramics and metal artefacts by EDXRF is widely acknowledged.1–4 In this article, we present the pigment identification of a Japanese print by means of a portable micro-beam EDXRF instrument. The equipment used in this study is a portable instrument consisting of an Oxford X-ray generator (Model XTF 5011) with Mo anode (50 kV, 1 mA). The detector used is a Vortex-EX SDD (Si) thermoelectrically cooled with a nominal area of 50 mm2 and a Be window. The X-ray generator and detector are coupled to a vacuum chamber5 in 45º geometry. This chamber was designed to allow alternating between a simple collimator and a polycapillary collimator. Using the polycapillary feature a spot size of 250 µm is obtained. The chamber also possesses a camera allowing the visualisation of the analysed area and thus the capture of the image (Figure 1) and the spot of analysis is highlighted by the two lasers, one green and one red. All spectra were collected using the polycapillary mode in vacuum, operating conditions of 30 kV, 0.5 mA and 300 s. The spectra analyses were performed using the AXIL-QXAS (Analysis of X-ray spectra by Iterative Least-squares fitting) software package developed by the International Atomic Energy Agency (IAEA). 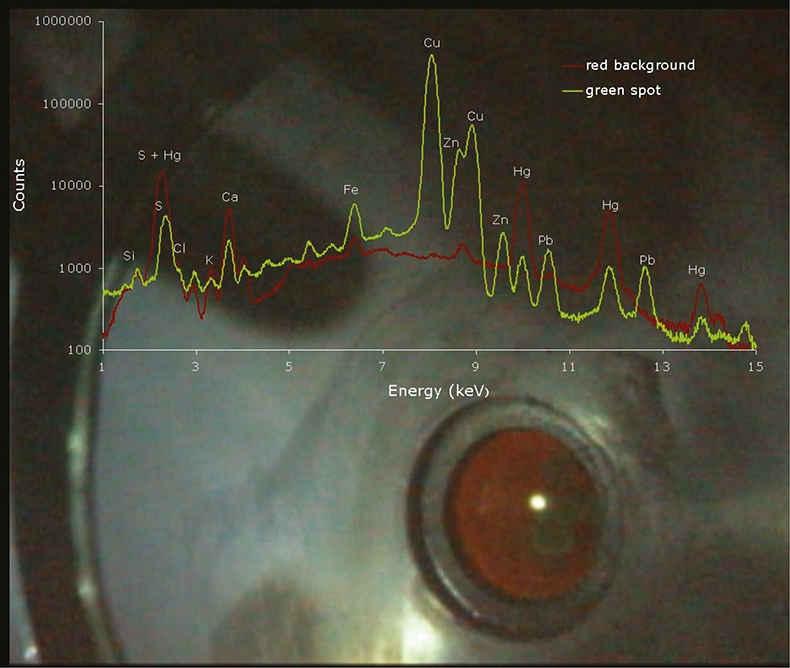 Figure 1. Image of the analysed area gathered with the interior camera, and spectra obtained for the green and red areas (the light is the reflection of a LED used to illuminate the chamber).

The analysed sample, shown in Figure 2, was acquired by a collector without any record of its provenance or former owners, so its authorship and time of creation is indefinite. Nonetheless, an expert in oriental textile artworks analysed the style and materials of the piece and identified it as Japanese print using the woodblock technique. 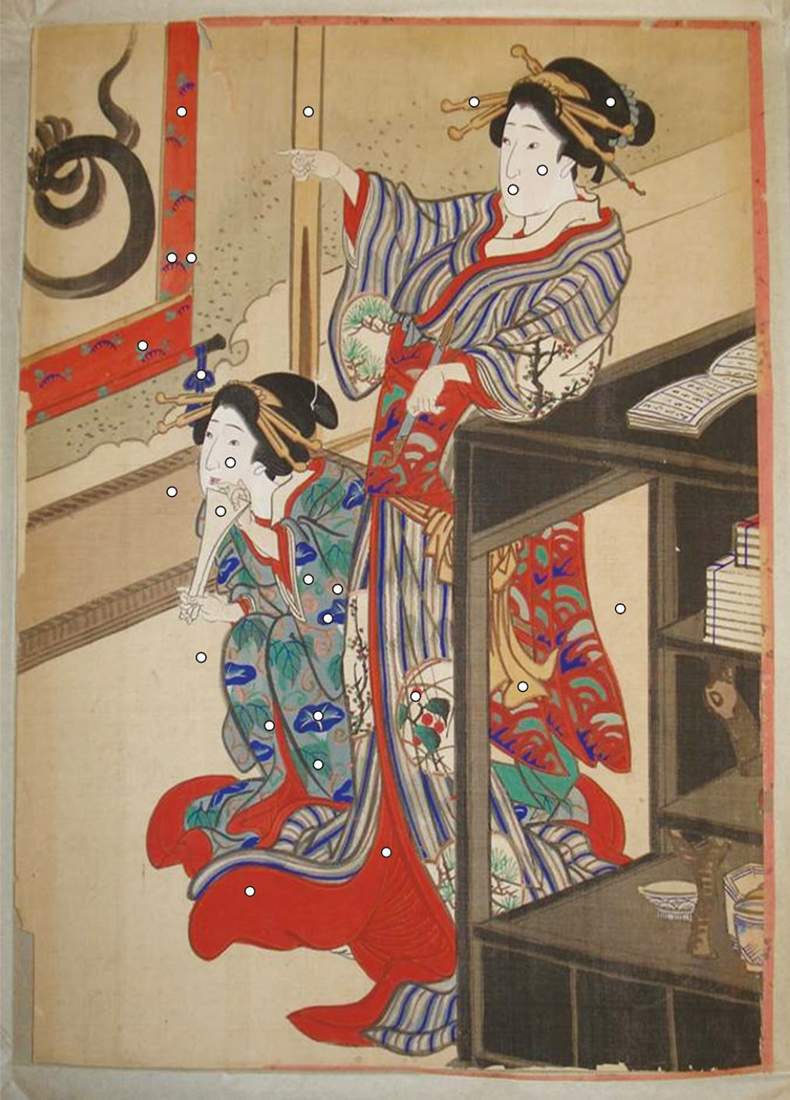 Figure 2. Picture of the Japanese woodblock print with analysed points (indicated by the round white spots)

Woodblock printmaking came to Japan from China probably around the eighth century. In the beginning, woodblock printmaking was done only in Buddhist monasteries, for the purpose of reproducing Buddhist texts and images, later also for books. Only at the beginning of the 17th century was printing also done in private studios. The first prints were just black-and-white. Japanese woodblock printmaking was at its prime during the Edo period (1603–1868). The artists expressed the spirit of a new time in their images, the ukiyo-e, which means “images of the floating world”. In the middle of the 17th century, the artist Moronobu was one of the first to create a single sheet woodblock print. These new, reasonably priced prints became very popular. There was a big variety of themes. In the beginning, legends were the main theme, and images from the popular kabuki theatre. The artist Harunobu designed prints showing scenes of everyday life. Utamaro was famous for his fine portraits of beautiful women. At the end of the 18th century, both landscape and animals became themes of artists such as the masters Hokusai and Hiroshige.

The EDXRF analysis and knowledge of the elemental content of the colours present in the print, gave enlightening results regarding the pigments used. In Figure 1 the spectra obtained for the red background and green spot in the upper left quadrant of the print are overlapped. The high amount of Hg in the red spot, as well as for other red areas, implies the use of vermillion (HgS) for the red pigment. The green pigment presented a high level of Cu, but also Zn and Pb, which suggests the use of a copper-based green pigment mixed with Lead white [2PbCO3.Pb(OH)2] and Zinc white (ZnO). According to Winter6 who compiled the major pigments used in East Asian artworks, the most widely used green pigment is Malachite [CuCO3.Cu(OH)2], but copper compounds other than Malachite can occur, such as copper chlorides like Atacamite and Paratacamite. Lead white, Zinc white and Calcite (CaCO3) are also common white pigments found in Japanese prints. A high presence of Ca was found in the face of the geishas implying the use of the mineral calcite.

The black of East Asian artworks is overwhelmingly Chinese ink.6 So there was no surprise when no significant differences were found in the elemental content of the black hair of the geishas and the background of the print. No higher levels of Fe or Mn were found which might indicate the presence of oxides of iron and manganese, suggesting the use of an organic compound, most likely Chinese Ink. For the salmon-coloured areas, no presence of characteristic elements was established either, suggesting again the use of an organic pigment.

For the blue decorations of the kimonos, no significant increase of Cu or Fe was found, suggesting the use of common pigments like Azurite [Cu(OH)2.2CuCO3] or Prussian Blue {Fe4[Fe(CN)6]3.xH2O}. On the other hand, as we can see in Figure 3, an increase of Al, Si and S was established when comparing them to the grey background. This might suggest the use of Ultramarine blue [Na8–10Al6Si6O24S2–4], which was also commonly used. 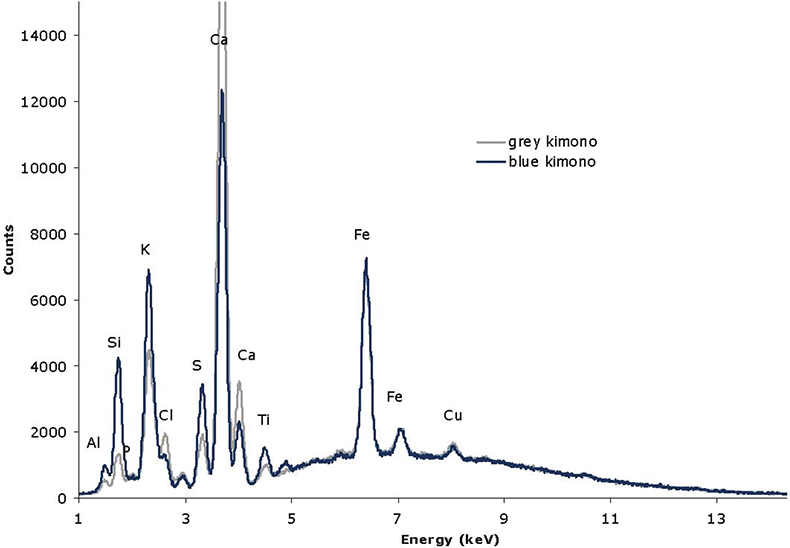 Figure 3. Comparison of the spectra obtained for grey and blue areas of the kimono of the sitting geisha.

This case study presents the analytical advantages of using a portable µ-EDXRF instrument developed specifically for Cultural Heritage purposes. On the one hand, the micro beam allows for distinct analysis of small regions that are very common in paintings, prints or written documents. On the other hand, the vacuum chamber allows the detection of lighter elements such as Al, Si, P and S enabling the identification of Ultramarine blue and Cinnabar. Finally, the possibility of portability is a major advantage in the Cultural Heritage field making possible in situ study of immovable objects. Furthermore, this article highlights the multidisciplinarity of these studies, which involve the complementary roles of physicists, chemists, historians, archaeologists, restorers and conservators in gaining a better understanding of past Art Work and thereby preserving it for the future.