Papers are susceptible to colour changes during storage. This is easily seen as a yellowish or brownish colour of old printed materials, such as old books and newspapers. It is important to identify the reactions causing yellowing, as some of those take place quickly after papermaking and that way decrease the value of the material. Furthermore, understanding the reactions and mechanisms of ageing would help in choosing the correct storage conditions for historical documents.

Pulp, the main raw material for paper, can be produced by two different methods: mechanical or chemical pulping. In mechanical pulping, wood fibres are first separated mechanically and then the fibres are bleached if a high whiteness level is targeted. Mechanical pulp is a relatively cheap raw material for paper and it is used mainly in low grade papers, e.g. newsprint. The chemical composition of mechanical pulp is close to the composition of wood. Hence, it is composed mainly of polysaccharides (cellulose and hemicelluloses) and aromatic lignin.

Papers with better optical properties, such as office papers, are made from chemical pulp. In chemical pulping, the wood fibres are separated chemically by depolymerising and dissolving lignin. In kraft pulping, which nowadays is the most common pulping process, sodium hydroxide and sodium sulphide are used as lignin-dissolving chemicals. After pulping, wood is defibrated, but the colour of the pulp has become dark brown, like a cartonboard. Hence, the remaining lignin is removed by other chemicals, such as oxygen, chlorine dioxide, peroxide and ozone. Because this entire process targets the removal of lignin, the bleached chemical pulp is composed mainly of polysaccharides. However, some of the polysaccharides undergo chemical reactions during pulping and therefore their structure does not entirely correspond to the structure of native polysaccharides.

Because mechanical and chemical pulps differ in their chemical composition, their behaviour during ageing is also different.1 Yellowing of mechanical pulp is mainly a photochemical reaction. Of course, other factors such as temperature, humidity, oxygen and pH also influence the rate and the mechanisms of yellowing, but light exposure is the most critical parameter that initiates yellowing reactions. Light is absorbed by aromatic moieties in lignin. This is followed by radical reactions that result in formation of highly coloured structures, chromophores. These reactions are fast and under direct sunlight mechanical pulp turns yellow within a few hours, as can be observed visually when newsprint is left in sunshine. The understanding of yellowing reactions requires the identification of the chromophores formed. However, their identification is challenging, as their concentration is low and they are bound in the fibre matrix.

Yellowing of chemical pulp is a thermochemical process, whereas light irradiation has only limited impact on brightness loss. In chemical pulps, the formed chromophores originate mainly from polysaccharides, while the traces of lignin may also undergo reactions that result in the formation of coloured structures. Like the chromophores in mechanical pulp, those in chemical pulps are also very low in concentration and bound to the fibres. This makes the analysis of chromophores difficult and only a few techniques are available to characterise them.

The brightness stability of pulps can be tested by artificially ageing pulp handsheets under strictly controlled conditions. For mechanical pulps, ageing is most commonly performed by exposing the samples to light that has a wavelength range similar to sunlight. On the other hand, chemical pulps are aged by heat treatment. There are several standardised ageing treatments, including both dry and humid heat treatments. Ageing in moist conditions [e.g. 80°C, 65% relative humidity (RH), 48 hours], however, probably simulates more accurately the conditions during pulp drying and storage.2

The change in pulp brightness during light or heat exposure reflects the quantity of chromophore formation during ageing. As a standard measure, pulp brightness is equal to the reflectance of an indefinitely thick sample at the wavelengths of blue light, mainly at 457 nm. This parameter is one of the most important in determining pulp quality, and typically mechanical pulps and chemical pulps have brightness of 70–85% and 88–92%, respectively. During ageing, the brightness may decrease several units and this reduces the value of the pulp. Even if brightness is an important quality parameter, it does not give information on chromophoric structures contributing to the pulp colour.

UV/vis spectroscopy as a tool to observe pulp chromophores

UV/vis reflectance spectroscopy is a practical method to study the chemistry of pulp yellowing.3 The visible spectral region and reflection spectra are sensitive to the changes in coloured pulp components determining the brightness. Absorption maxima in non-linear reflection spectra are not always easy to identify, but structural information on the chromophores can be obtained from the spectrum, where the reflectance of an “infinitely” thick sample is plotted against wavelength, as is shown for a mechanical pulp sample before and after light irradiation for five hours (Figure 1). The main difference occurs at c. 340–400 nm, which increases during light exposure. On the other hand, the reflectance band at 420–600 nm decreases during light irradiation, explaining the reduced brightness of the sample. 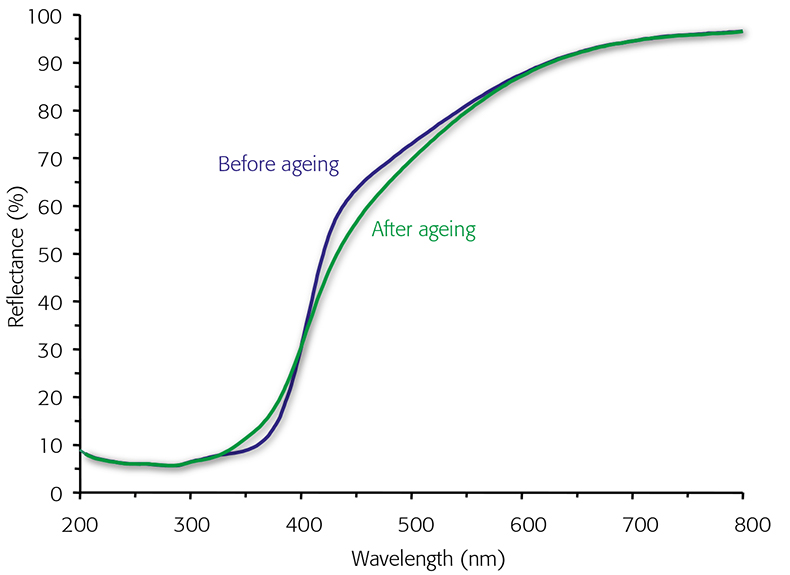 Figure 1. Reflectance spectra of mechanical pulp before and after light exposure for five hours.

The conversion of a reflection spectrum into an absorbance spectrum by applying the Kubelka–Munk equation (1) improves the applicability of UV/vis spectroscopy for pulp and paper samples. Paper is a diffusively scattering media, and reflectance is affected by both absorption and scattering properties, as described by the Kubelka–Munk equation (1), where R∞ stands for the reflectance of an infinitely thick sample, k for the light absorption coefficient and s for the light scattering coefficient.

If the light scattering coefficient in paper samples is considered constant, the k/s is directly proportional to light absorbance and thereby pulp chromophore content. During ageing, the scattering properties of paper remain unchanged, and k/s can be used as such without resolving k and s separately. When performing the conversion for the reflectance spectrum, it is possible to gather information on the light absorbing species, both in the UV and visible ranges. Figure 2 shows the k/s spectrum of mechanical pulps before and after light exposure. It can be observed that not many changes occurred in the UV range between 200 nm and 300 nm, whereas remarkable changes in the 300–500 nm spectral range can be observed. The shoulder at c. 350 nm reduced upon ageing, probably illustrating the degradation of coniferyl aldehyde structures present in lignin. The absorptions close to 315 nm and above 400 nm increased during light irradiation, indicating the formation of conjugated chromophores, probably α-carbonyl structures and quinones. 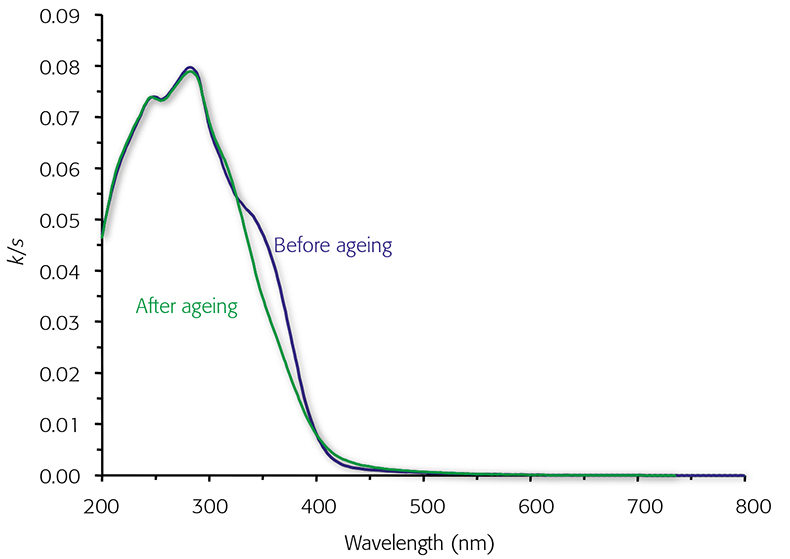 Figure 2. Absorbance (k/s) spectra of mechanical pulp before and after light exposure for five hours.

Chemical pulps are composed almost entirely of cellulose and hemicelluloses (xylan and glucomannan). Therefore the brightness reversion takes place in carbohydrate moieties. The most heat-sensitive structures in these carbohydrate structures are hexenuronic acid groups—conjugated side-groups formed in alkaline pulping. As a thermal degradation product of hexenuronic acid, 5-formyl-2-furancarboxylic acid (FFA) is formed, which reacts further and forms highly coloured small-molecular components.4 It is noteworthy that both hexenuronic acid and the primary degradation product FFA are colourless, but due to their thermolability they both have significant roles in brightness reversion of chemical pulps.

The thermal degradation of hexenuronic acid can easily be followed by UV/vis spectroscopy. Figure 3 shows a UV/vis absorbance spectrum of kraft pulp with a high hexenuronic acid content. The strong band at 240 nm arises from hexenuronic acid. After heat treatment, the band has decreased in intensity, while the intensity of band arising from FFA at 285 nm has increased. Simultaneously, the absorbance at 320–500 nm has increased. When heat-treatment is prolonged, the band at 285 nm decreases and the absorption in the visible range increases consequently. 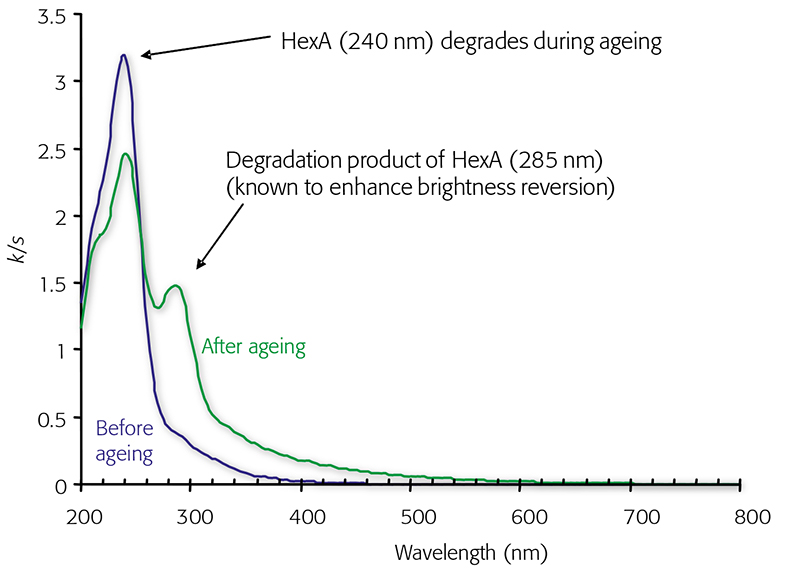 Figure 3. Absorbance (k/s) spectra of bleached chemical pulp before and after heat treatment at 80 °C, 65 % RH and 48 hours.

UV/vis reflection spectroscopy is a practical method to investigate pulp ageing, especially when reflectance spectra are converted to absorbance (k/s) spectra. Even if detailed reaction paths cannot be solved with this technique alone, it provides a very fast and simple method to study the changes in the concentrations of certain important pulp components during ageing. In addition, the concentrations of these components have been studied also in other pulp processes, such as mechanical and chemical pulp bleaching.