The analysis of highly complex mixtures presents significant analytical challenges. Amongst the range of such samples, petroleum is considered one of nature’s most complex mixtures. As a result, there is a strong need to better understand the chemistry of heavy petroleum and this becomes a driving force to improve analytical methodologies.

The molecular characterisation of petroleum and its derivatives by mass spectrometry has become known as “petroleomics”. During the course of our research within this field, we have developed an approach for the characterisation of the most challenging complex mixtures. Based upon a combination of custom experiments and an in-house data processing algorithm, we used Fourier transform ion cyclotron resonance mass spectrometry (FT-ICR MS) to successfully analyse a non-distillable fraction of a heavy petroleum sample, representing one of the most complex mixtures investigated to date. The approach enabled the acquisition of data at constant ultrahigh resolving power (approximately 3 million FWHM, full-width at half maximum) across the entire mass range and, in the process, we assigned 244,779 unique elemental compositions, setting a new record.

A broad view of the chemical components of heavy crude oil is key in the development of new upgrading technologies, and analytical chemistry, therefore, remains at the research forefront of petroleum upgrading. Heavy crude oils are extremely complex and most conventional analytical techniques do not offer the level of performance required to provide sufficiently detailed molecular insights into crude oil behaviour under upgrading conditions.

Ultrahigh resolution mass spectrometry, offering resolving power in the region of 105–106 FWHM and sub part-per-million mass accuracy, is perhaps the only analytical technique able to separate and assign individual compositions in complex mixtures such as crude oils. In particular, FT-ICR mass spectrometers (Figure 1) offer the highest available performance and, therefore, are the ideal analytical technique for obtaining insights into the molecular composition of crude oils. Due to the complexity of such samples, many compositions can be observed at each nominal mass, differing by small mass defects as a result of contributions from the different elements for each composition. Ultrahigh resolving power (for example, 500,000 FWHM at m/z 400) is often required to separate species with very small mass differences. As a well-known example, two elemental compositions can differ through the presence of C3 rather than SH4—a difference of only 0.00337 Da! It is essential to be able to resolve this mass difference (or “mass split”) in order to observe and assign sulfur-containing compounds that can poison catalysts, act as atmospheric pollutants and prove to be corrosive at elevated temperatures. 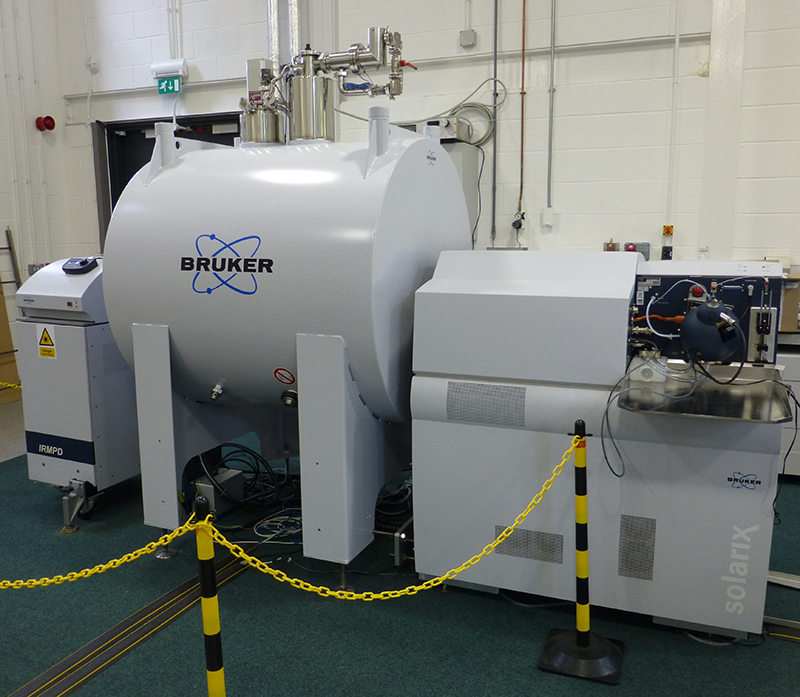 Traditional FT-ICR-based analysis can be used to assign the individual molecular species across a wide mass-to-charge ratio (m/z 150–1600), which includes components that are sufficiently heavy to be less amenable for gas chromatography. It is well known, however, that the ability to resolve individual compositions using FT-ICR MS decreases as the m/z increases; for a given m/z range, the resolving power is inversely proportional to the m/z. Therefore, small mass differences might be not individually determined at higher mass. Unfortunately, it is also at higher m/z that it is possible to have a greater number of compositions per nominal mass, and so this is the region where ultrahigh resolving power is most needed.

FT-ICR instruments must also deal with a balance that determines the complexity of the data they can produce. Such mass spectrometers typically need approximately 100 ions per m/z (i.e per ion cloud) to successfully record a peak, but there is also an upper limit on the number of ions that can be stored within an ICR cell during an experiment: typically of an order of a few million ions, before space–charge effects become too severe. This essentially means that FT-ICR mass spectrometers can detect a maximum of tens of thousands of peaks within a single experiment, thus limiting the dynamic range.

Those performance limitations are particularly important when heavier, low volatility fractions of heavy crude oil are analysed. The aim of our work was to analyse the “maltenes” (a fraction of petroleum soluble in n-heptane) of a truly non-distillable fraction (boiling point above 687 °C at atmospheric equivalent temperature) of a heavy crude oil. Following experiments using different experimental set-ups and methods of sample preparation, successful acquisition of a full mass spectrum remained elusive.

The reason for this turned out to be the extraordinary complexity of the sample, basically overwhelming the instrument. In order to detect signal, it was necessary to start by isolating and detecting a very narrow m/z range. In this experimental set-up, a narrow m/z range of ions is transmitted through a quadrupole and accumulated in a collision cell, prior to transfer to the ICR cell for excitation and detection. This decreases the number of ions been detected in a single experiment, reduces the deleterious space–charge effects and increases the dynamic range. By performing this experiment, it was found that approximately 300 individual molecular compositions could be detected per nominal mass. By acquiring data using multiple, narrow windows, it is possible to “stitch” the data to generate a single mass spectrum. This method has been previously demonstrated and led to the previous record number of unique compositional assignments for a single sample: 126,264 molecular species for an “asphalt volcano” sample.1

Although space–charge effects are reduced and dynamic range is increased, the resolution achieved by traditional stitching methods, however, suffers from the well-known decrease in resolving power with increasing m/z, in similarity with traditional broadband experiments. This means such stitching experiments do not offer sufficient improvement in performance to resolve and assign compositions at the higher m/z region.

Additionally, traditional stitching methodologies have influenced the overall mass envelope as a consequence of different instrument parameters for the different windows. Anticipating molecular compositions of up to m/z 2000 present in the truly non-distillable fraction, a traditional stitching method will not have enough resolving power to individually assign molecular species with a mass difference of less than 0.0011 Da, for example, above m/z 1000. A fundamental modification of the stitching method was therefore necessary. 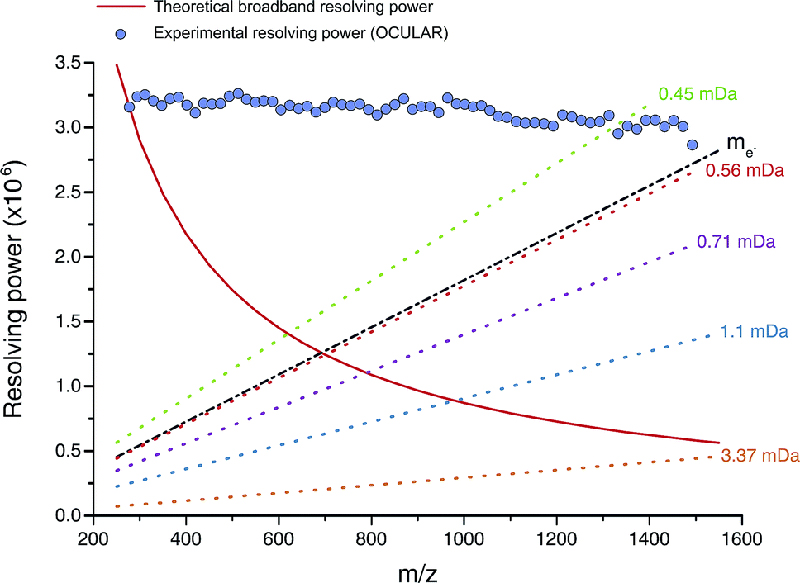 Figure 2. Red line: mass resolving power calculated for a mass spectrum acquired in broadband mode under ideal conditions, such as a perfect vacuum and no space-charge effects. The dotted lines represent the calculated minimum mass resolving powers required to resolve two peaks of comparable abundance, separated by the mass difference listed. The data points mark the mean experimental resolving power per 20 Da window. The resolving power afforded by the OCULAR method is sufficient to resolve peaks separated by a difference equivalent to only the mass of one electron (me, continuous black line; 0.0005485 Da) across the full mass range. Reproduced from Reference 3 under a Creative Commons Attribution licence.

The new approach also incorporates in-house software named Rhapso2 that trims the data, determines the best position for overlapping the many segments, corrects the relative abundances of the ions in the segments (due to “edge effects” for windows when using a quadrupole for the isolation) and then automatically stitches the segments. The result is a single mass spectrum which was produced at near constant resolving power across the full m/z range. This approach has been termed “operation at constant ultrahigh resolving power” or “OCULAR”. Using OCULAR, it becomes possible to acquire a mass spectrum with a constant ultrahigh resolving power, improved mass accuracy, reduced space–charge effects and increased dynamic range (Figure 3). In the published example, it was possible to assign a total of 244,779 individual molecular compositions in a truly non-distillable fraction of a heavy crude oil: the largest number of unique elemental compositions detected in a single sample to date.3 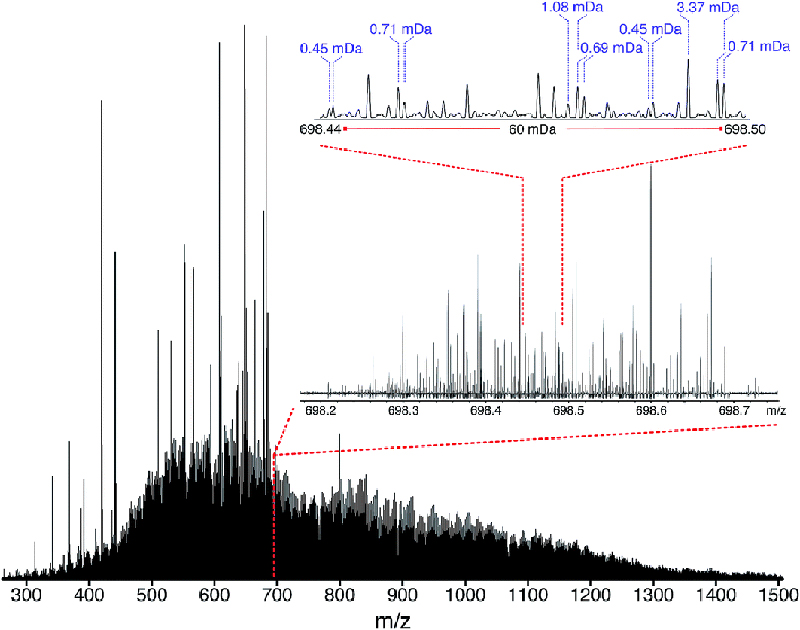 Figure 3. Stitched mass spectrum of the non-distillable fraction of a heavy crude oil, with peaks spanning m/z 260–1505. The spectrum was obtained by stitching 65 windows, each with an m/z width of 24, with steadily increasing acquisition time per segment to result in near constant resolving power across the m/z range. An enlarged region, showing assignments for m/z 698, is shown. Reproduced from Reference 3 under a Creative Commons Attribution licence.

The approach is flexible and the performance that can be achieved using OCULAR depends on the number of windows and the target resolving power. For instance, a mass spectrum with an increased resolving power could be achieved by the acquisition of a minimum of two segments and, in this case, the mass spectra could be acquired in approximately 30 min. Heavier fractions of crude oil, however, will require higher performance and, therefore, a higher number of narrow windows in order to sufficiently boost performance. In the example of the truly non-distillable fraction, 65 windows were acquired with a mass range of 24 Da each in order to produce the complete mass spectrum.

A constant ultrahigh resolving power of approximately 3 million FWHM was achieved across the range of m/z 260–1505. This level of performance has enabled the resolution of species which differ in mass defect by less than the mass of an electron and has allowed the assignment of molecular compositions with sub-ppb (part-per-billion) mass accuracy. The extraordinary number of compositions spanned dozens of heteroatomic compositions, contained up to 114 carbon atoms, and represented up to 51 double bond equivalents (DBE). The high number of species with heteroatomic compositions (species containing sulfur, nitrogen and/or oxygen atoms) helped to explain the extremely low volatility of the truly non-distillable fractions of the crude oil and highlight the enormous challenges that will need to be addressed to upgrade heavier crude oils.

While the OCULAR approach has been used to successfully characterise a petroleum sample which had previously been too challenging due to its complexity, its applicability is not confined to petroleum samples. With the flexibility of the method, it is also suitable for the analysis of other complex mixtures and challenging samples, with anticipated applications in the fields of metabolomics, medical research, polymers, environmental analysis and renewable energy, amongst others. At the University of Warwick, usage and development of OCULAR is on-going and further publications utilising OCULAR will follow.