Introduction to the Foundation for Analytical Science & Technology in Africa

The Foundation for Analytical Science & Technology in Africa (FASTA) is a charitable company that was established in 2005 in response to a request to provide a GC-MS to the Jomo Kenyatta University of Agriculture & Technology (JKUAT) in Nairobi, Kenya. FASTA was founded by Steve Lancaster of BP and Barrie Nixon of Mass Spec UK Ltd. The objectives of the organisation are to support scientific education, analytical research and the preservation of the environment in Africa via capacity-building and technology transfer. Several organisations, including The Royal Society of Chemistry, The British Mass Spectrometry Society, Mass Spec UK, Pfizer, BP, PerkinElmer and Dionex, amongst others, have provided generous grants and donated equipment. Their support has been critical in allowing FASTA to set up the first GC-MS laboratory at JKUAT. The aims and objectives of FASTA are to:

To achieve these aims and to ensure that they are sustainable, FASTA is now collaborating with the Pan Africa Chemistry Network (PACN), an organisation managed by the Royal Society of Chemistry with funding by Syngenta. The goal of the PACN is to create a critical mass of local scientists with expertise in advanced analytical technology that can react rapidly to the demand for high quality analysis in the preservation of the environment and this goal is one which is shared by FASTA. Over the last two years FASTA has installed and currently maintains two GC-MS systems in the Chemistry Department at JKUAT. These instruments are currently being used for postgraduate research and analysis of a wide range of samples including water and air samples. FASTA has also introduced thermal desorption equipment to be interfaced with one of the GC-MS instruments to facilitate air analysis. As a result of this work, JKUAT is now recognised by the Kenyan government as a centre of excellence in environmental research and analytical chemistry.

FASTA is collaborating with Professor Anthony Gachanja of JKUAT and continually widening the scope of the laboratory’s research initiatives. Additionally, FASTA is now working closely with the PACN to enable JKUAT and other Universities in Nairobi to become a hub for analytical science in East Africa, offering technical excellence and high-level analytical equipment which can be used for analysis and training throughout the region.1–3

The attrition of global biodiversity is a current topical issue. Many stories detailing loss of habitat, species extinction and climate change are covered by the press on an almost daily basis. Two examples are the dramatic decline in vulture populations in Asia and in the large predators and scavenging species in Africa.

JKUAT and FASTA are now collaborating with Ms Ngaio Richards, a researcher and conservationist currently completing her doctoral work in the area of wildlife forensics. The main impetus of her research is to develop forensic methodology for the detection of veterinary drugs in livestock animals and vultures in Africa that can be readily disseminated to, and adapted by, interested parties. She is also liaising with a number of collaborators in East Africa, including WildlifeDirect and Maseno University on the broader and more immediate issue of human–wildlife conflict and wildlife (and human) poisoning in agricultural areas. The objectives of this work are to: 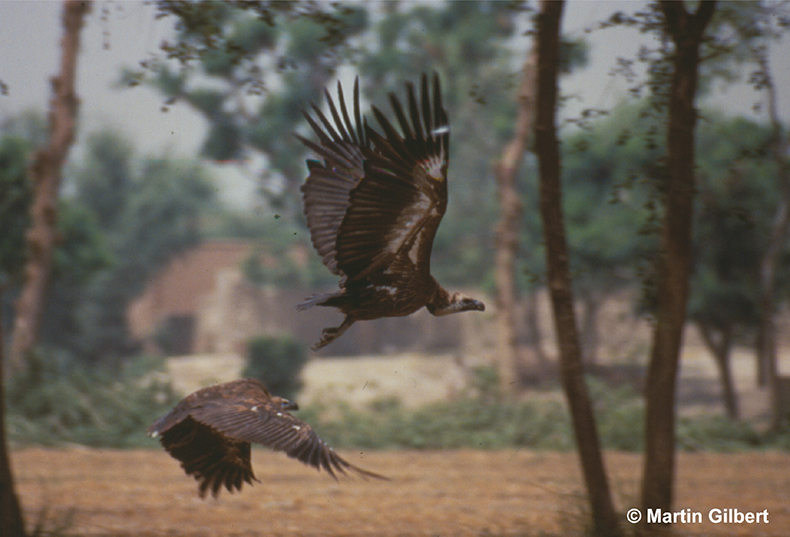 Ongoing exposure to the non-steroidal anti-inflammatory drug (NSAID) diclofenac is now regarded as the primary cause of the near extinction of three species of Gyps vultures on the Indian subcontinent.4 Once among the most abundant species on Earth, these vultures rapidly and thoroughly scavenged the millions of livestock carcasses that were left out for them each year. The diclofenac was administered to the livestock, used as working animals, to treat pain and inflammation from lacerations and ailments related to old age. Wild dogs and rats have moved in to replace the vultures, but they are far less efficient as scavengers and actively pose a number of health risks to residents and domestic/livestock animals.5

It was only after the decline of these species that people really came to appreciate how integral vultures are to human and ecosystem health. Often maligned for their ungainly appearance and demeanour, vultures worldwide face various threats: human persecution, loss of habitat and prey base, secondary poisoning and exposure to contaminants. The situation on the Indian subcontinent challenged the often aesthetically-based notion of species value. It has also generated an increasing interest in whether or not exposure to NSAIDs is playing a role in observed population declines elsewhere.

Certain species of vultures suffer fatal kidney failure, identified by the presence of visceral gout, when exposed to diclofenac.6 Veterinary use of diclofenac is now being phased out on the Indian subcontinent, and the drug meloxicam is being promoted as a safer alternative.7 Young birds and surviving adults have been removed from the wild for safekeeping and captive breeding programmes. The safety of other NSAIDs registered for veterinary use to vulture and other wildlife species remains to be assessed.

To address this, a multi-screening procedure is being developed to detect diclofenac and other NSAIDs of concern in animal hair, feathers and talons, by GC-MS. It is known that drugs incorporated into human hair and nails are effectively locked in, and these structures are very resistant to environmental deterioration.8–10 The aim is to provide an alternate diagnostic and monitoring tool, to complement conventional tissue analysis and increase the number of carcasses that can be submitted and screened for exposure to NSAIDs.

Other concerns: the African perspective

Diclofenac is now registered for veterinary use and readily available in some parts of Africa. Vigilance will be required on the part of conservationists and researchers to ensure that diclofenac and other NSAIDs used in Africa are not further contributing to the declines. Exposure to even a fraction of the treated carcasses that were available in India, for example at vulture “restaurants” or feeding stations, could spell disaster for Africa’s already imperilled vultures.

Last year an onslaught of wildlife poisonings in Kenya received media attention. Lions, hyenas, jackals and vultures, among others, perished consuming carcasses baited with poison. Indiscriminate use of poisons and pesticides, particularly in response to human–wildlife conflict, are taking their toll on Kenya’s charismatic wildlife, and this in turn has an adverse effect on the tourist industry. The carbamate insecticide carbofuran is suspected in many of the poisonings.11 There is also concern for human health as the insecticide may be improperly used for agricultural applications as well as for hunting. Because of this there is also interest in monitoring human samples for evidence of exposure.

These situations and the response to them have uncovered the lack of baseline data that exists on human and wildlife poisonings as well as the need to establish systematic and long-term monitoring of human and wildlife health in Kenya. 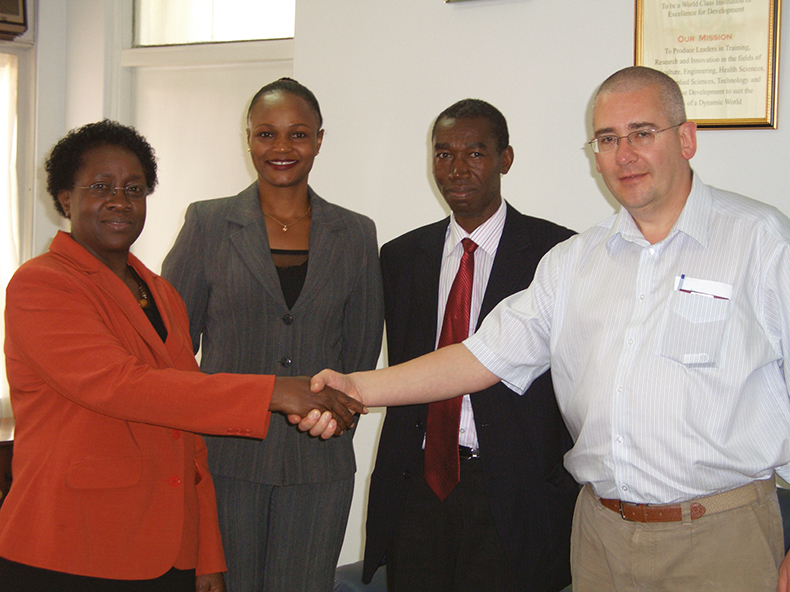 Opportunity for conservation, collaboration and capacity-building

A pilot project is being set up with Professor Gachanja to implement the NSAID detection methodology at the JKUAT laboratory, ensuring that the analysis of wildlife samples can be added to the list of analytical services offered by the centre. Because NSAIDs mask the signs of pain and inflammation, their use is prohibited or closely monitored in the horse racing industry. Thus, the detection methodology will also be adapted for analysis of equine doping so that the laboratory can generate sufficient revenue to offer low cost analysis of wildlife samples to conservation bodies and other stakeholders with minimal financial resources. The JKUAT laboratory will liaise with relevant local laboratories and researchers to remain apprised of any emerging developments within the conservation and analytical community. FASTA’s association with PACN will help JKUAT to develop links between chemists across the entire African continent and facilitate collaboration with UK scientists.

As scientists with a passion for chemistry, much respect for the abilities of our colleagues in Africa and a dedication to the preservation of our environment, the directors of FASTA have made an enduring commitment to provide participating laboratories with the facilities they require to establish themselves and become self sustaining into the future. We hope to be involved in this exciting process of collaboration, capacity-building and conservation for many years to come.

The authors thank Martin Gilbert and the Peregrine Fund for kind permission to use the vulture photograph. Thanks also to everyone who has helped over the years, particularly the British Mass Spectrometry Society, the Royal Society of Chemistry and BP for financial support. Pfizer, PerkinElmer and Dionex for equipment. Mass Spec UK Ltd and Barrie Nixon without whom none of this would have been possible