Forthcoming regulations dealing with the protection of the environment together with rocketing fossil fuel prices are pushing for better engine efficiencies. In this respect, Low Temperature Combustion (LTC) systems are currently receiving a lot of interest. However, these systems require new exhaust gas treatment catalysts able to oxidise relatively high concentrations of CO and residual hydrocarbons at low temperatures, while the NO present should preferably not be oxidised to NO2. The new catalytic materials must be durable under the severe post-combustion conditions (e.g. high temperature spikes, high steam concentration) and should contain the lowest possible amount of expensive noble metals.

In the present study, operando infrared (IR) spectroscopy was used to investigate under realistic conditions the oxidation activity of Pt and Pd supported on different oxides, with the aim of generating mechanistic information that will be used for the design of improved formulations.

Each support was stabilised by a thermal pre-treatment before the impregnation (0.8% wt). Subsequently, the samples were calcined and finally submitted to a hydrothermal treatment at 973 K in order to simulate catalyst ageing.

Metal dispersion was measured following the method described by Binet et al. on Pd supported compounds.1 Self-supported disks of the samples were treated in an IR quartz cell, first by an oxidising cleaning treatment up to 873 K, then by a reducing treatment under H2 at 473 K to improve the metal particle affinity for CO. Calibrated small amounts of CO were then introduced into the cell, measuring in parallel the area of the IR bands associated with the adducts. Spectra were recorded with a Nicolet 6700 FT-IR (Fourier Transform Infrared Spectroscopy) spectrometer and treated by the Nicolet OMNICTM software.

The catalyst was investigated under conditions similar to that occurring in LTC catalytic converters using a dedicated apparatus with various gas supplies and analytical systems. Details concerning the lay-out and the characteristics of this so-called operando system are reported in Reference 2. A schematic representation of the system is shown in Figure 1. 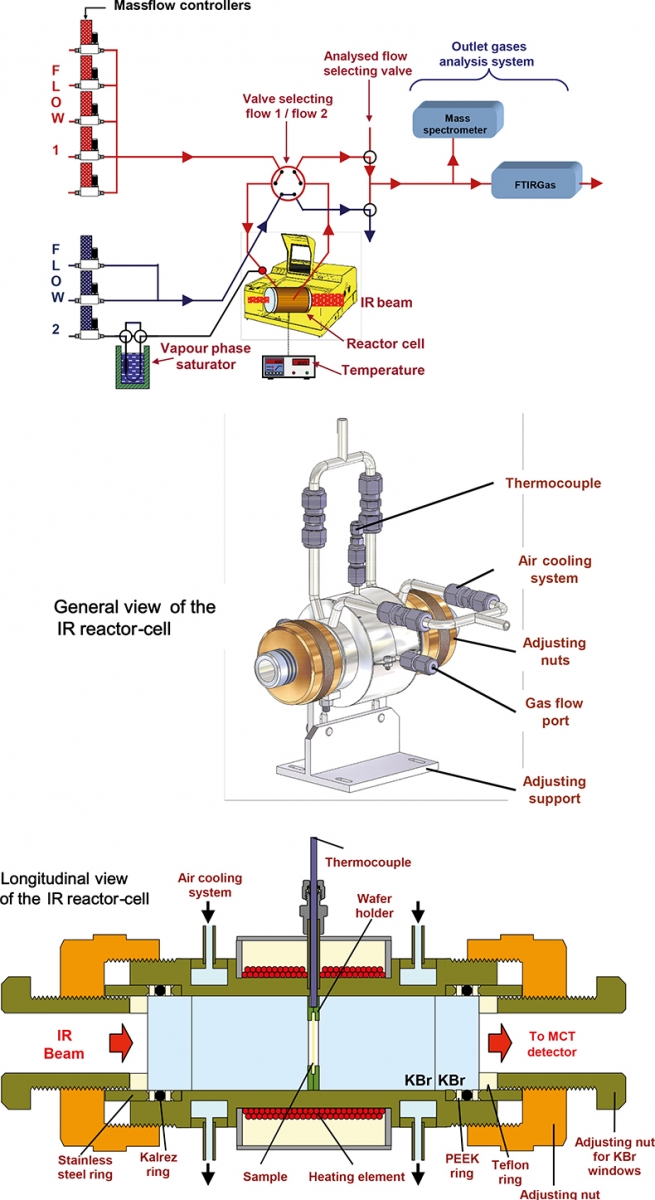 Similarly to the case of the in situ analyses, the catalysts were studied by FT-IR spectroscopy in a reactor cell; the analysis of the outlet gases was performed by means of a FT-IR gas microcell and a mass spectrometer.

The interaction of CO with metal atoms is generally described using the model proposed by Blyholder3,4 based on molecular orbitals. Through metal back-donation effects, the ν(CO) vibration is sensitive to: (i) the number of metal atoms linked to CO molecules; (ii) the coordinance of the metal atom onto which the CO is adsorbed; (iii) the degree of oxidation of the metal; (iv) the surface coverage; and (v) the presence of electrophilic or nucleophilic compounds.

The methodology chosen in order to measure the metal dispersion is based on the hypothesis (verified by CO adsorption studies followed by IR measurements) that carbon monoxide preferentially adsorbs on the accessible surface metal atoms and that there is a ca 1 : 1 ratio between the number of surface metal atoms and adsorbed CO molecules.

CO is observed on the support only after the saturation of the metallic phase and no residual gas pressure can be detected in the cell, therefore all the CO molecules introduced until the metal surface is saturated are considered as adsorbed on the catalyst.

The spectra corresponding to the CO adsorption on different Pd-supported materials present similar features, independently from the nature of the supporting oxide. An example is given in Figure 2 for Pd/CeO2. Different bands can be observed in the spectral range of the v(C–O) vibration stretching mode.

Figure 2. Surface IR spectra of a Pd/CeO2 sample exposed to the adsorption of calibrated CO doses.

The most intense band at 2062 cm–1 (idicated by “It”) corresponds to CO linearly adsorbed on Pd located on terraces of the Pd crystallites. A shoulder can be observed near 2030 cm–1 (idicated by “Ie”), due to the CO adsorption on Pd atom located on the edges of the Pd crystallites. At lower wavenumbers 1923, 1845 and 1724 cm–1, broad bands are attributed to doubly- and triply-bridged CO (II–III).

When the CO coverage increases, an increase of the frequency is observed (2077, 1948, 1869 and 1776 cm–1). The greater the number of adsorbed CO molecule, the lower is on average the electron back-donation from the metal to the adsorbates. The back-donation decrease leads to a weakening of the adsorbate–metal bond and to a strengthening of the CO bond, therefore to an increase of the CO stretching wavenumber.5

Bands below 1600 cm–1 show the presence of carbonate species.  CO can in fact also interact with the basic O2– sites of the support and form successively carbonite CO22– and carbonate CO32– ions.6 Taking into account that these bands are weak and that the molar extinction coefficient of carbonate is nearly 10-fold greater than that of CO, the transformation of CO into carbonates can be neglected.

The spectra obtained in the case of CO adsorption on the Pt-containing oxides were similar to those obtained in the case of the Pd-containing catalysts. One main band, corresponding to ν(CO) vibration of linearly adsorbed CO on the Pt atoms (on terraces and edges), is observed after CO adsorption on the five different Pt supported catalysts. Bridged CO species give rise to a weak feature at around 1800 cm–1.

Calculation of the metal dispersion

The variation of the integrated intensity of the ν(CO) bands bound to the metal plotted as a function of the amount of introduced CO exhibits a slope break corresponding to the saturation of the accessible metal sites on the surface.

Assuming that the adsorption ratio CO/Metal atom can be considered as 1 (as mentioned above), the number of surface palladium sites nM* (equal to the number of adsorbed CO at metal saturation) can be easily determined.

The dispersion can be then calculated according to the following equation:

in which nMimpregnated is the total number of metal atoms impregnated. This gives values between 5% and 30% depending on the support and on the metal, Pd being relatively better dispersed than Pt. The dispersion values are low due to the severe ageing treatment.

Operando IR study: analysis of the oxidation properties of the materials under stream

The different samples were studied under a gas stream representative of the car exhaust to be treated. At each temperature, IR spectra of the catalyst surface and of the corresponding gas phase were recorded at the steady state, alongside the mass spectra of the reactor effluent, which was continuously monitored. The combination of the three analytical methods allowed us (i) to discriminate and quantify the different species coordinated to the surface of the samples and (ii) to measure the concentration of the various reaction products in the gas phase. An example of the typical features obtained by these methods is reported in Figure 3 for Pd/CeO2. From these spectra we can determine: 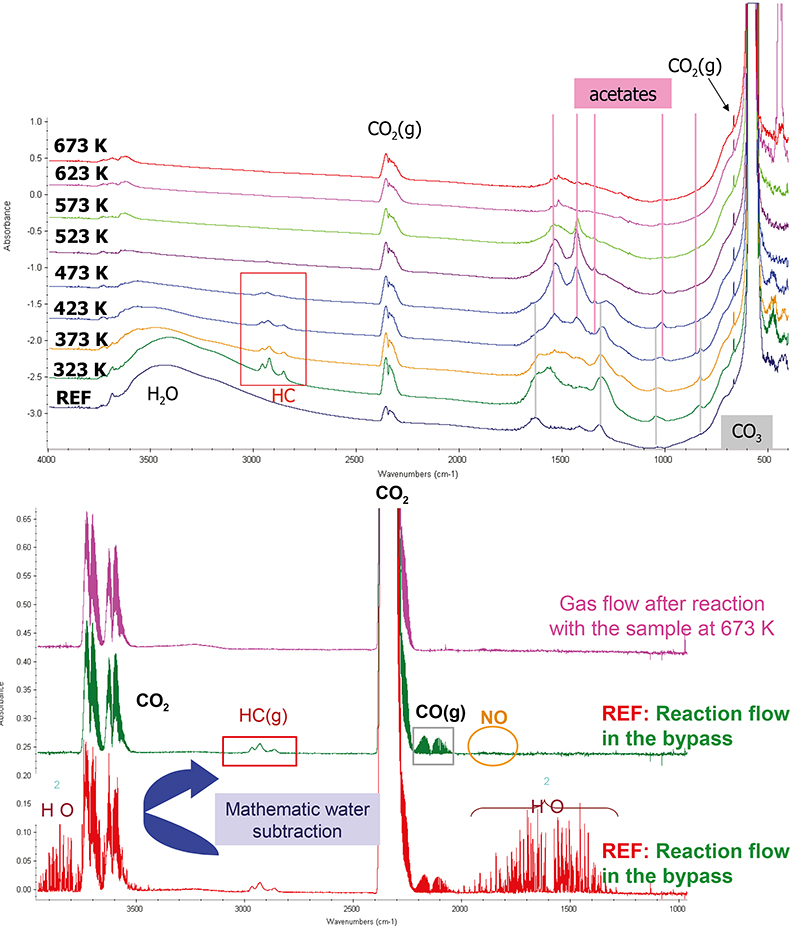 It must be stressed that the gas-phase concentrations measured by IR were consistent with those obtained by mass spectrometry. Both gas-phase signals are actually complementary, since the IR data can resolve some difficulties associated with important common mass fragments (e.g. m/z = 28, 44).

Carbonates were formed at the lowest temperatures in the presence of large CO2 concentrations. Hydrocarbons started to be converted generally at 373 K and remained observable in the IR surface spectra up to 523 K. The conversion of hydrocarbons gave rise to acetates. The intensity of acetates increased up to 473 K, while that of hydrocarbon decreased, and decreased at higher temperatures. Meanwhile, carbonates remain adsorbed, the intensity of the band associated with these adsorbed species becoming lower with the temperature. CO oxidation also takes place in the 373–573 K temperature range.

The CO conversion profiles showed that the sample exhibiting the lowest CO light-off temperature (~400 K) was Pd/Zr0.92Pr0.08O2-δ, which also showed a total carbon monoxide conversion at 473 K. (Catalyst light-off temperature is defined as the temperature at which 50% conversion of CO is achieved.) Such activity values are close to the requirements expected for this post-combustion treatment. Pd/Al2O3 exhibited a similar behaviour, but about 100 K higher in the light-off domain, without presenting total CO conversion up to 673 K. Since alumina presents significant acidity, the possibility of surface coking seems the most likely. Pt-containing samples showed a lower oxidising power. In the best case conversion started above 423 K. The light-off temperatures were between 470 K and about 570 K, while the total CO conversion was achieved only for the Pt/Ce0.50Zr0.50O2 sample, at 623 K. The main reason for that should probably be found in the fact that at low temperature CO poisons Pt sites, as it was evidenced by IR spectra of the sample surface, showing intense carbonyl bands up to ~473 K (spectra not shown here).

Regarding the oxidation of hydrocarbons, the supports based on rare-earth oxides seemed to yield better oxidising properties than alumina, certainly due to the high oxygen mobility of these compounds.7 It is important to note that no traces of aldehydes or other oxygenated or polluting by-products were detected.

Various catalysts based on platinum and palladium supported on basic metal oxides and solid solutions containing rare-earth elements were investigated in the study described here.

A concentration of the noble metals as low as 0.8% was sufficient to obtain a satisfactory CO oxidation rate, without the formation of noxious products, such as NOx or aldehydes. Currently, the rare-earth-based compounds (that on praseodymium, in particular) seem to be most interesting for this type of exhaust gas control application. The analytical techniques combined here, i.e. mass spectrometry, in situ and operando IR spectroscopy, yield a very powerful method for studying in detail this type of catalyst, under realistic conditions, in order to gain mechanistic information that will allow tailoring an improved active and selective catalyst.

The authors acknowledge the kind contribution of PSA company to this study.