Contamination control and outgassing restrictions have long been a key factor in spacecraft design and yet different spacecraft report on the degradation of optical instruments because of the deposition of water and organics. The spacecraft environment has been characterised for the European Space Agency (ESA) Rosetta spacecraft, which was launched in 2004, with a very sensitive mass spectrometer and a pressure sensor (part of the ROSINA instrument, see later) on board. For the first time, spacecraft outgassing rates and composition have been monitored for more than six years and over a large range of heliocentric distances. The detected composition of the background gas reflects the outgassing of the spacecraft structure, the propellant, lubricant and the omnipresent water. The results show that spacecraft outgassing is a largely underestimated phenomenon which affects not only optical instruments but also in situ mass spectrometry, particularly of thin atmospheres.

Spacecraft outgassing and its influence on optical instruments are an established and well-examined phenomenon. Examples include degradation by deposition of water or organics on mirrors or lenses as seen, for example, on the Solar Extreme UV Monitor (SEM) on the Solar and Heliospheric Observatory (SOHO).1 For mass spectrometry (MS) the effect of spacecraft outgassing is of a different nature: rather than degrading the sensor performance, outgassing causes significant background signals and, therefore, considerably complicates detection of thin atmospheres (for example, of an asteroid).2

Outgassing can even perturb spacecraft operation by the recoil force of the gas when there is non-isotropic outgassing. This effect was reported for the Microwave Anisotropy Probe (MAP), where an anomalous force was observed during manoeuvres.3 This effect was also reported for Rosetta during a deep space manoeuver in January 2011.4

Rosetta is a solar-powered spacecraft of the European Space Agency on a mission to comet 67P/Churyumov-Gerasimenko. It consists of two main elements: the Rosetta orbiter and the Philea lander. The main orbiter has dimensions of 2.8 m × 2.1 m × 2.0 m and on both sides there are 14 m long solar panels with a total area of 64 m2.

The Rosetta Orbiter Spectrometer for Ion and Neutral Analysis (ROSINA), one out of ten scientific instruments on board, consists of three sensors: a cometary pressure sensor (COPS), a double focusing mass spectrometer (DFMS) and a reflectron-type time-of-flight mass spectrometer (RToF). In this article, only measurements undertaken by COPS and DFMS are presented.

A description of ROSINA can be found in Reference 5. COPS consists of two different pressure gauges for velocity (ram gauge) and density (nude gauge) with a detection limit of 10–11 mbar with the nude gauge. DFMS has an unprecedented sensitivity of 10–5 A mbar–1, covers a mass range of 12–150 amu e–1 and has a resolution of m / Dm > 3000 at 1% peak height in the high-resolution mode. In low resolution simultaneous recording of several mass lines on the detector with a resolution of m / Dm > 500 is possible.

Rosetta was fabricated under very clean conditions and outgassing requirements were very stringent not only for the spacecraft but also for the payload.

There are three different processes which can explain the outgassing mechanism of a spacecraft: desorption, diffusion and decomposition. The pressure, p, for all three processes follows the relation p ~ e(–Ea/RT), where Ea is the characteristic activation energy, R is the gas constant and T is the temperature.6

Desorption has an exponential dependence on time and strongly depends on surface temperature. The activation energy for desorption is the lowest of all three processes (4–40 kJ mol–1).

Gas from the spacecraft interior and from within material (for example, multilayer blankets) diffuses slowly to the surface and contributes to the outgassing. Outgassing decreases with time, t–0.5, and the activation energy is 20–60 kJ mol–1. As the surface temperature of Rosetta did not change more than 50 K and the interior temperature not more than 20 K over the heliocentric distance range (0.8–4 AU; 1 AU is approximately the mean distance between the Earth and the Sun), the change in temperature had little influence on the diffusion process.

The third process is the result of decomposition of material and is almost time independent. This process needs the highest activation energy which is provided by solar UV or cosmic rays on the outer layers of the spacecraft.

A combination of these three processes can explain the measurements of COPS and DFMS over more than six years since the launch (Figure 1).

COPS was first turned on 20 days after launch and measured a pressure of 2 × 10–9 mbar. In the following months it decreased rapidly to 2.5 × 10–10 mbar. This can be explained by desorption, which dominates COPS measurements in the first 200 days after launch with a 1 e–1 decay time of about 30 d. After around 1100 days COPS pressure measurements are in the lower 10–11 mbar range. DFMS is far more sensitive and the deduced pressure at that time is, within uncertainties, similar to COPS measurements.

Early in a mission, decomposition is negligible, but becomes more important as the probe is exposed longer to space. After 4000 days, when Rosetta reaches the end of the mission, outgassing will still be dominated by diffusion; however, decomposition becomes comparable or even dominant for very long mission durations. 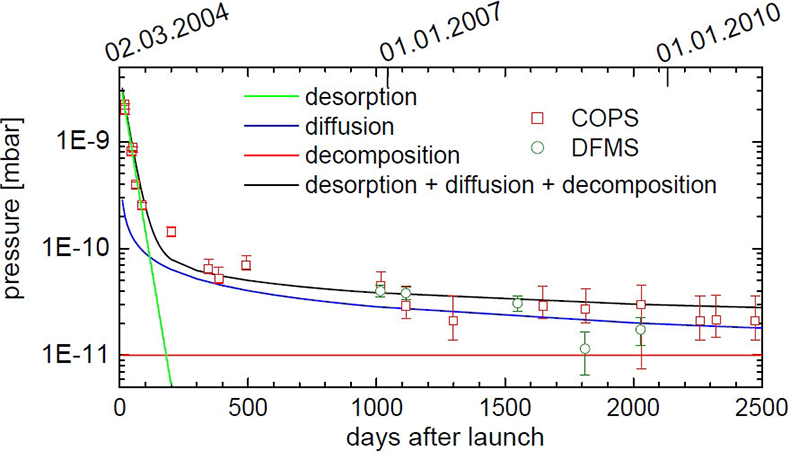 To meet the instrument requirements demanded by the scientific objectives of Rosetta, DFMS is operated in two modes. The low resolution mode is used when the priority is set on sensitivity or sampling rate rather than mass resolution. A typical example of when low resolution modes will be used is during early comet operation phase in order to determine the onset of cometary activity due to sublimation of H2O, CO2 and CO ice. The high-resolution mode is used when the focus is on the separation of species with similar masses (for example, CO and N2 or 13C and CH) or on the identification of unknown species based on a precise mass determination.

A low-resolution mass spectrum of the spacecraft environment in July 2010 is shown in Figure 2. The most prominent signals are H2O (at 18 amu e–1), OH (17 amu e–1) and O (16 amu e–1) from the water group, the mass 28 signal (CO and N2) and the 44 amu e–1 peak (CO2). A wide variety of other compounds exists and only few mass lines have no clearly identifiable signal (for example, 23 amu e–1and 80 amu e–1). DFMS uses electron impact ionisation of 45 eV electrons emitted from hot cathodes as the ionisation method; therefore, fragmentation plays an important role and complicates the identification of parent molecules. However, the general distribution of intensities, in particular the periodic shape of the spectrum, suggests that a majority of these signals are due to organic compounds. 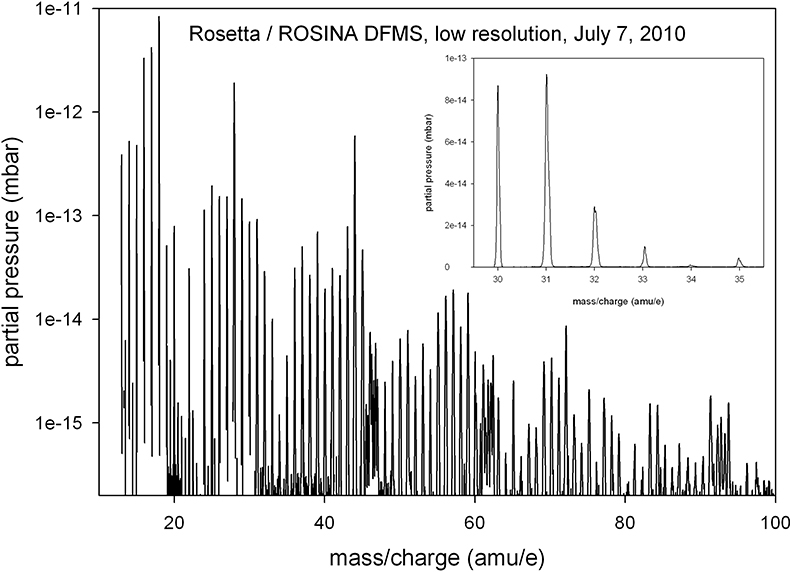 Figure 2. A low-resolution spectrum of the spacecraft background taken in July 2010, at a heliocentric distance of 2.7 AU. Integration time per mass line is 20 s and the electron emission current is 200 uA. The inset shows part of the mass spectrum in a linear scale to illustrate the mass resolution in this low-resolution mode.

This suspicion is confirmed when DFMS high-resolution spectra are considered; an example of an integer mass line is shown in Figure 3: evaluation of such spectra over the full high-resolution mass range (12–100  amu  e–1) allow the identification of parent molecules and fragments and therefore a detailed characterisation of outgassing sources which are summarised below (Reference 2 and references therein). 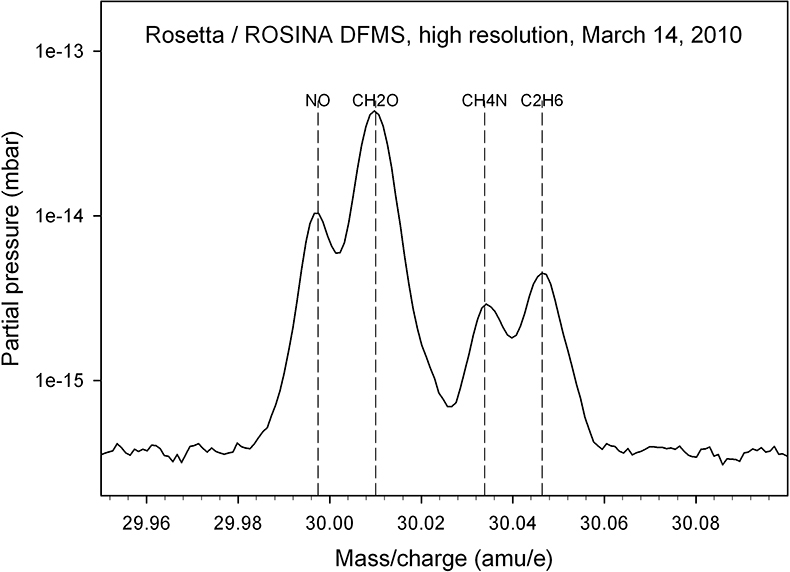 Figure 3. A high-resolution spectrum, taken in March 2010, allows one to separate the mass 30 amu e–1 signal into its constituents NO, CH2O, CH4N and C2H6.

In contrast to the common opinion that desorption of water becomes negligible a few weeks after launch, one should note that (1) many spacecraft materials have significantly larger effective areas than given by simple geometric considerations and (2) adsorbed water is often sealed or does not have easy access to space, making diffusion the main water outgassing mechanism. Typical examples include honeycomb structures, often used to build mechanical platforms due to their structural efficiency, and multi-layer insulation foils, which are used for passive thermal control.

Even prior to launch, fluorine was detected, while chlorine appeared only in space. It is clear that some of the fluorine is due to remnants from brazing, but part of it is certainly due to fluorocarbons contained in structures and tapes. An interesting result in this context has been the confirmation of fluoro, together with aliphatic compounds pointing to Braycote vacuum grease, as suggested by Marshall et al.7 Braycote is a perfluorated polyester used to lubricate mechanical joints, such as the antenna support on Rosetta, and can decompose if exposed to radiation. The materials thus formed are more volatile than Braycote itself and, therefore, contribute to the background.

Rosetta uses monomethyl-hydrazine (MMH, CH3NHNH2) and nitrogen-tetroxide (N2O4) as a bipropellant. While the MMH parent molecule and a wide range of fragments were observed, a detection of N2O4 is pending. Note that the combustion of MMH and N2O4 yields H2O and CO2 and, therefore, contributes to the background of these species and their fragments. The detection of other nitrogen bearing molecules, such as C2H4N or C4H4N2, requires other nitrogen supplies, which are abundant; it is not unusual to use materials containing polyamines, polyimines, polyurethanes or epoxies as coatings, pottings, adhesives or for the structure.

Although contamination control and outgassing restrictions have been considered for a long time during the design and construction of spacecraft, the phenomenon and the associated timescales still seem to be highly underestimated. The current generation of space-borne MS has reached a point where instrument performance is no longer limited by the sensitivity, but by the presence of the spacecraft and outgassing properties of selected materials for construction. This fact makes a detailed characterisation of outgassing by MS possible. Unlike observations from spectrometers probing the electromagnetic spectrum—where measurements of outgassing are not possible—compositional information obtained by MS is independent of the excitation of energy states of particles and is therefore ideal for a more comprehensive detectability. Of course there are aggravating factors for MS measurements (for example, fragmentation, fractionation, ionisation and detection efficiencies) but, given their high sensitivities, almost any species of the spacecraft environment are detectable.

The extended set of species detected by ROSINA in Rosetta’s environment and their obvious relationship to construction material give the impression that the current outgassing selection criteria are not as stringent as they should be. A material so far is considered adequate for spacecraft if the total mass loss of a sample is less than 1% when heated to 125°C for 24 h and if the collected volatile condensable materials lost during the same procedure does not exceed 0.1% of the sample mass.8 In space, where high energetic ions, electrons and photons contribute to the decomposition of material, the environment is not as benign as in a vacuum chamber. The material selection criteria may not, therefore, as for example in the case of the vacuum grease Braycote, be adequate for flight. However, a certain degree of outgassing can never be avoided (adsorbed water, propellant) and, therefore, the outgassing-related interference for sensitive surfaces and instruments can only be minimised through optimisation of their location on the spacecraft during the design phase and protective measures during flight (for example, covers for optical instruments).