The growing use of Fourier transform infrared (FT-IR) spectroscopy as a tool for quality checking amongst other things foodstuffs, industrial products and pharmaceuticals begs the question of how this technology could be applied to quantifying aspects of the internal environment of living organisms. To do this requires knowledge of the types of exudates and secretions that organisms produce. Usefully, all organisms do this and, as such, the potential to look into the internal environment of living organisms is now being realised. My particular interest is in molluscan mucus as a measure of both species identification and ­environmental monitoring. This interest has led onto considerations of how monitoring of mucus could be used in other organisms, particularly humans. This article hopes to provide a brief current overview of the use of FT-IR spectroscopy in the investigation of mucus from a variety of organisms.

Mucus, in general, is used as an agent to protect cell surfaces exposed to the external environment and is crucial in many organisms’ defence and/or locomotory behaviours. The smaller the animal, the larger its external surface area in relation to its body size and the more important the protection of that surface becomes. Mid-infrared spectro­scopy has been used for many years to examine vertebrate mucopoly­saccharides1 and invertebrate mucus,2,3 with 99% of all invertebrates having mucus secretions.4 Invertebrate mucus is made up of a range of lectins, charged ­mucopolysaccharides, glycoproteins, proteins, uronic acid, sialic acid, hexosamine and a variety of other molecules in an aqueous carrier medium. For example, dried mucus of the circum-Mediterranean land snail, Otala lactea, produced transmission mid-infrared KBr disk spectra indicating the presence of amides, sulphate esters, methyl groups and carboxyl groups.3 These types of spectra hint at the species information that can be recovered from fractions of whole raw mucus. These approaches may not give detailed structural information on large proteinaceous molecules but they do give hints and, as such, can quantify proteins, distinguish between different proteins and give broad information on overall structural motifs.5,6 FT-IR spectroscopy also allows for the characterisation and identification of unknown molecules in complex mixtures, both through systematic assignment of spectral bands and via empirical matching of spectral profiles to libraries of stored profiles (“fingerprinting”). For example, the neuronal and hormonal control of mucus secretion required to adapt the mucus of the banana slug to threat, mates or weather, can be seen within the composition of the mucus secreted.7,8 Other examples include information about a snail’s sexual state and direction of locomotion to conspecifics and predators.4,9,10 The uniqueness of an individual mucus at species level has been supported by findings using sodium dodecyl sulphate polyacrylamide gel electrophoresis (SDS-PAGE) of seven snail species, which showed that there were few similarities between the individual species’ carbohydrate and protein profiles.11 This is the initial strength of FT-IR spectroscopic studies in that differences can be identified quickly and cheaply from living organisms in the raw state before more exacting and expensive research tools are used. Some recent examples of the diversity and range of applications of the use of FT-IR spectroscopy in the examination and study of mucus and mucus-like substances are briefly covered below.

Many terrestrial slugs are particularly difficult to identify and the FT-IR spectroscopic screening system developed by us has shown the potential to allow non-experts to access a database of gastropod profiles which will allow field identification.6 For instance, Deroceras reticulatum, the “Grey Field Slug”, is notoriously difficult to identify due to the large number of colour morphs and size differences. It is also the major pest mollusc of arable crops, so its identification is important to farming communities. Application of field FT-IR spectroscopy analysis may make it possible to eliminate spurious identification based on the variable factors of size and colour. It may also be possible to use these spectra to form a library of profiles, which could then be used to assess the degree of change in the local ­environment of the terrestrial gastropod. The idea of a spectral library for organisms is one that will keep cropping up and forms the basis of a variety of current patent applications in other organisms (see Human examples discussion below).

At first glance it might appear that developing these libraries will just be a case of time and effort; however, it soon becomes clear that the site of collection of the mucus is as important as how it is collected. For example, the mantle and pedal mucus of the Black slug (Arion ater) are structurally different (see Figure 1) and, as such, are likely to be used differently by the organism. 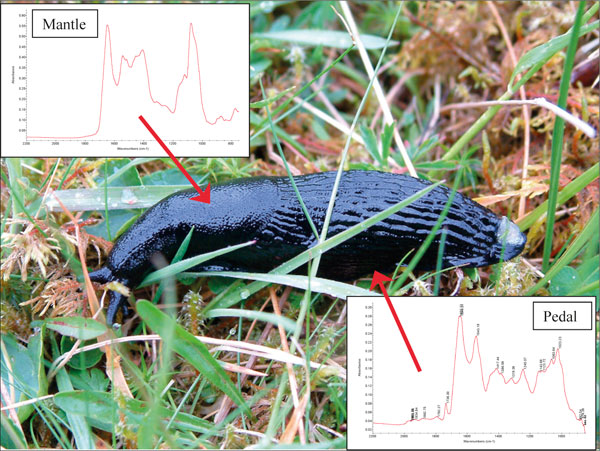 FT-IR microscopy of nematodes has shown that it can be used to differentiate species based on exudates.12 This has the potential to become important in identifying the sources of diseases in humans such as trichinosis, heartworm and roundworm infections.

Although not directly produced as a mucus-like compound, the flexibility of chitin during moulting is down to its malleable properties that have been used pharmaceutically to produce Chitosan (the product of alkaline deacetylation of chitin) for use as a cationic hydrogel for drug release studies.13

Used to assess the environmental contribution of hard-tube worms tube matrix. Tube morphology and structure requires a flexibility in the early stages that is down to mucus-like substances in the primary matrix exudates. The presence of these mucus like-substances was elucidated by chemical analysis and then confirmed by FT-IR spectroscopy.14 This is also seen in snails.

FT-IR spectroscopy has been used to characterise the properties of mucilages produced by algal blooms associated with certain water conditions that affect the northern Adriatic Sea.15 Understanding the source and composition of these algal blooms may help decide how to tackle these potentially lethal blooms.

Biofilm production involves a mucus-gel-like secretion that is susceptible to FT-IR spectroscopic analysis; FT-IR spectro­scopy offers the possibility for in situ, non-destructive measurement of biofilm growth. Enterobacter cloacae, which has a mucus coating that is integral to biofilm formation, were grown on ZnSe crystals in a flow through system and analysed using attenuated total reflection (ATR) spectroscopy.16 This ability to classify micro-organisms based on matching the FT-IR spectra with other chemometrics17 is in no small part due to the types of cell protection offered by mucus.

There is a lot of interest in studying fish mucus for the purpose of environmental monitoring, but the use of FT-IR spectro­scopy has yet to be fully realised from such studies. However, studies undertaken by us have shown that it has potential, see, for example, Figure 2, in which FT-IR spectra of the surface mucus of two salmonid species (Coho Salmon and Rainbow Trout) show two distinct species spectral profiles. Measures such as this might be used for non-expert identification of fish species in criminal cases where the mucus could be used to differentiate legal and illegally caught fish. 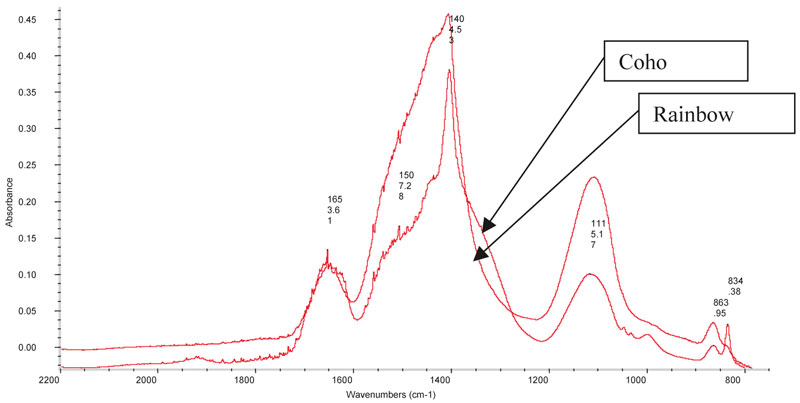 Whilst the majority of FT-IR spectroscopic clinically-related studies have focused on non-mucosal investigations such as those found in cancerous tissues, gall stones and diabetes,18 the emergence of chronic obstructive pulmonary disease (COPD) as a growing global health challenge has created an interest with application of a screening patent based on sputum analysis19 that came from earlier studies on oral mucus (see Figure 320). 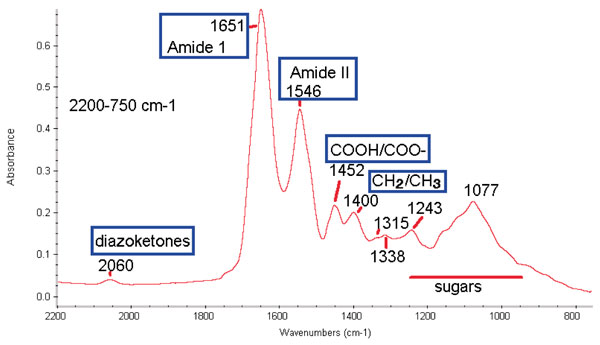 FT-IR spectroscopy of fresh and dried mucus gives information on the composition and structural elements of mucus and it can also be used to detect disturbances and alterations to mucus and mucus-like secretions. FT-IR-spectroscopy is still an emerging technique in these application areas; however, FT-IR ­spectroscopy of whole mucus can reveal differences in its composition, as many of the molecular components of mucus can be referenced to an increasing number of existing molecular libraries across many organisms.