As part of the USP–NF modernisation process, the General Chapters (Chemical Analysis) Expert Committee has, and continues to review the current versions of this approach, which was introduced three years ago in an earlier column.1 Spectroscopic general chapters are being grouped in pairs; chapters numbered below 1000 are mandatory, designed to address the legal performance requirements for “fitness for purpose” when the technique is used in a monograph and those above 1000 give additional information on theory, application and best practice. This “fitness for purpose” is primarily related to a technical performance specification of the instrument or system and represents a minimum standard. However, compliance with a technical specification alone cannot provide overall “suitability for use” and best practice guidance for both theory and application is to be contained in the above-1000 chapters.

Since the original grouping of these requirements, like in so many controlled environments, the concepts and/or requirements continue to evolve and reposition; assisted it must be said, by the extensive feedback from the user community. It is an observation on human nature that invariably it is not until a proposed revision becomes a legal requirement, does the feedback begin? This evolution is discussed in detail, later in this article.

This paired chapter approach has also been applied to other spectroscopic techniques:

The original General Chapter <851>, Spectrophotometry and Light Scattering, covered many spectroscopic techniques and had remained essentially unchanged over many years. In the USP Review Cycle 2010 to 2015, work started on separating out the various spectroscopic techniques from <851> into pairs of chapters. It is intended to remove <851> once all the separate chapters are written and approved.

The purpose of this column is to review this progress over the last three years and particularly on the changes intended in the USP Review Cycle 2015 to 2020. We intend to cover a similar development of the spectroscopic chapters in the European Pharmacopoeia in a future column.

The spectroscopic general chapters are intended to be self-supporting albeit within the framework of the General Chapter on Analytical Instrument Qualification <1058>. This chapter was officially updated in August 2017 to include, in particular, an extended risk-based approach, enhanced roles and responsibilities and a more integrated approach to software validation. There is an increasing inability to separate the hardware and software parts of modern spectroscopic instruments. In many instances, the software is needed to qualify the instrument, and the instrument operation is essential when validating the software. Therefore, to avoid overlapping and potential duplication, software validation and instrument qualification can be integrated into a single activity. There is also a proposal to harmonise this General Chapter with the second edition of the GAMP Laboratory Good Practice Guide.2,3 A further revision of <1058> is expected during the 2015–2020 USP revision cycle.

To avoid unnecessary or conflicting guidance, the majority of mathematical and statistical methods of data transformation and evaluation including calibration modelling were removed from the specific chapters and incorporated in a new General Chapter “Chemometrics <1039>” which becomes official in December 2017. This was particularly important for the revision of the NIR and Raman spectroscopy chapters. The overall scope of this chapter is shown in Figure 1.

Figure 1. Structure of the content of USP General Chapter <1039> on Chemometrics.

The current situation on the in-process revisions for these chapters is illustrated in Figure 2. The large majority of the paired chapters have now been published, following the template structure, previously published as an informational article in Pharmacopeial Forum.4 One of the consequences of the devolution of <851> was the recognition that not all the relevant topics were included. For example, near infrared (NIR) was missing. In addition, the above-1000 chapters for NIR and Raman (<1119> and <1120>) did not have a below-1000 mandatory chapter. In contrast, the nephelometry and turbidimetry and the light scattering parts of <851> were moved to two new below-1000 chapters, <855> and<429>, respectively. As yet, there are no plans for the best practice above-1000 chapters for these general chapters, although USP does have an Expert Panel currently working on “Analytical Methodologies based on the Light Scattering Phenomenon” in all its chemical/optical/physical variants. 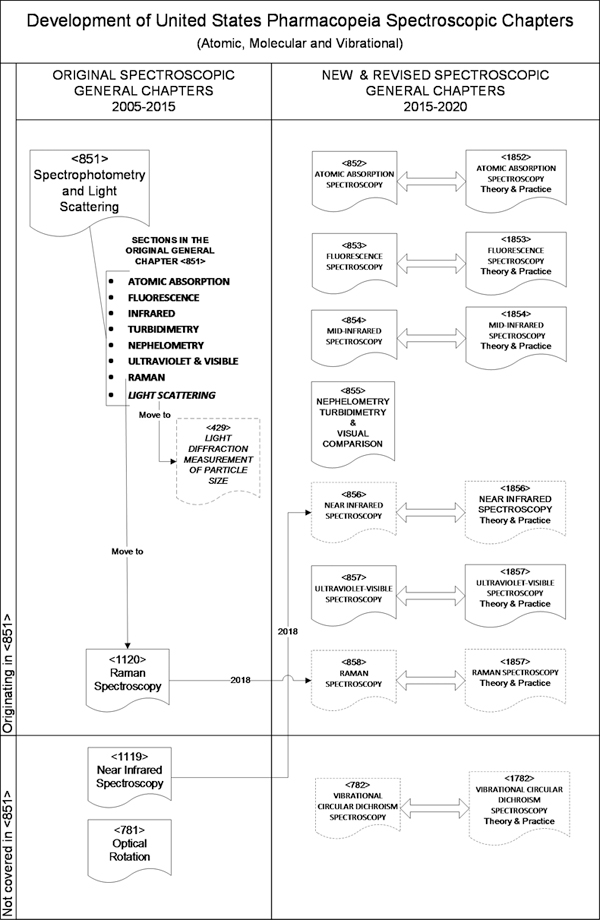 The omission of a General Chapter on chiral spectroscopies was recognised and a pair of chapters on circular dichroism, <782> and <1782>, were written to supplement the original optical rotation general chapter <781>.

As can be seen, there has been an enormous amount of effort in restructuring and modernising these General Chapters. The work is not finished and already some of the established chapters are in revision, e.g. <857> and <1857> on Ultraviolet and Visible Spectroscopy, for the reasons already stated. The NIR and Raman chapter pairs are in the final stages of their conversion after extensive comments from industry and will be published in Pharmacopeial Forum during 2018.

In this process, one of the principal discussions has been centred around just what to include in the below-1000 chapter, i.e. a mandatory requirement, as this is a fine balancing act between clearly defining the requirement, but also avoiding the risk that compliance will automatically be assigned if the stated requirement is too specific and limited; even though the overriding general requirement is stated up-front.

If we take a simple metrological requirement, i.e. the determination of length, as an analogy, the mandatory requirement could be simply stated as:

“Using a calibrated Micrometer or Vernier Gauge, accurately determine the length over the expected measurement range in use.”

However, if there is an additional statement to this requirement, for example:

“Calibration in the 0–25 mm range can be providing using Certified Reference blocks of designation XYZ.”

Then there is the risk that the perceived, required compliance can be achieved by simply ensuring that calibration in the 0–25 mm range has been performed, even though the measurements may be being performed within a 0–50 mm range; i.e. the question still has to be asked “…so what about accuracy in the range 25 to 50 mm?”.

Therefore, in conclusion, one could also argue that the route being taken by USP parallels that of this ISO conversion of ISO Guide 34 into ISO 17034. The chapters current structure shown in Figure 2 could be considered at the same/similar stage to ISO Guide 34, used as a standard for Reference Material producers, i.e. they do provide an effective document against which “fitness for purpose” can be examined, but could benefit from a degree of simplification along the lines of those discussed.

This is probably one step too far for the revision process which continues during the 2015–2020 USP revision cycle, as it will require a change to the agreed template format, but no doubt, something possibly for 2020–2025, alongside closer continuing harmonisation with the European Pharmacopoeia?

A look at the reference material industry
22 October 2019

The kilo, the mole and the commutability of a result to activity
11 December 2018