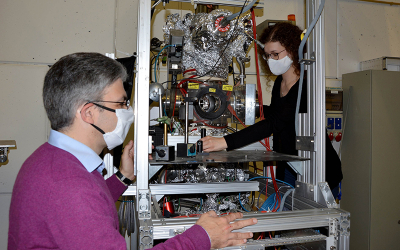 Scientists at Johannes Gutenberg University Mainz (JGU) and GSI Helmholtzzentrum für Schwerionenforschung (GSI) are participating in the education of young postgraduate students in the fields of nuclear and atomic physics and nuclear chemistry. The goal of this EU-funded Innovative Training Network (ITN) on Laser Ionisation and Spectroscopy of Actinide Elements (LISA) is to decipher the structure of actinides and thus put in place the prerequisite for their future use in biomedical physics, in nuclear applications and for environmental monitoring

LISA is coordinated by the CERN research centre. As for Mainz University, Professor Christoph Düllmann and Professor Klaus Wendt are involved as is Professor Michael Block at GSI. “Of the 15 early-stage researchers being funded, six are expected to obtain their doctorates at JGU. We thus play a significant role within the new LISA network”, said Professor Klaus Wendt. “Thanks to the highly effective collaboration between our nuclear chemistry and physics disciplines here at JGU with the Helmholtz Institute Mainz in the field of actinide research we are also expecting interesting and important results here.” Wendt himself will supervise three doctoral students.

In addition to the universities in Mainz, Hanover, Jena, Gothenburg in Sweden, and Leuven in Belgium, major research institutions such as CERN, GSI Helmholtzzentrum für Schwerionenforschung (GSI) in Darmstadt, the heavy ion accelerator Grand Accélérateur National d'Ions Lourds (GANIL) in France, and the accelerator facility in Jyväskylä in Finland are also participating in the ITN. There are also two commercial partners based in Kassel and Glasgow. Moreover, there are 12 other partner organisations from Canada to Japan, who can contact the doctoral students for scientific exchange.

In the initial phase, Professor Christoph Düllmann’s group at the JGU Department of Chemistry is to chemically purify exotic actinide isotopes that are available in sufficient quantities and are adequately stable. “We will develop techniques to then convert them to a form optimised for the intended experiments within the LISA network in Jyväskylä and at GANIL, also in Mainz and at GSI”, explained Düllmann, head of the joint Superheavy Element Chemistry Group of JGU, GSI and the Helmholtz Institute Mainz (HIM).

At GSI in Darmstadt, Professor Michael Block’s group will be employing laser spectroscopy to study the heaviest actinides. These can only be produced artificially and are generally very short-lived. With the help of lasers, the optical excitation of energy levels in the elements’ atomic shells will be measured in detail in order to determine their atomic and nuclear properties. “The ITN is an optimal research environment for doctoral candidates to systematically and comprehensively study these exotic actinides”, said Block. The first candidate has already started her work at GSI this summer.

Uranium and plutonium are probably the best known actinides, but curium, einsteinium, fermium and mendelevium also belong to this group of radioactive elements. They all are usually extremely unstable and at present can only be produced synthetically in research reactors or particle accelerators. Due to their short-lived nature, they still provide science with major puzzles. Researching them should therefore improve our understanding of their atomic and nuclear properties. Building on this, the LISA network intends to develop new laser technologies to be able to create and investigate actinides for the development of innovative applications. LISA will promote the coherent and symbiotic collaboration between the participants, which is intended to continue after the end of the project.