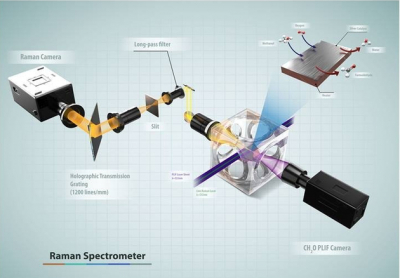 Catalysis is critical to many applications, from converting crude oil into fuel to removing pollutants from automobile exhaust and industrial processes. One of the main types of catalysis is heterogeneous catalysis. This is when a catalyst and a substance the catalyst reacts with are in different states—gas, liquid or solid. The most common is gas–solid catalysis. In this type, the interaction of gases with the surface of a solid catalyst greatly accelerates the rates of reaction. Until the last decade, scientists examining gas–solid heterogeneous catalysis often studied these reactions at conditions not found in real-world industrial applications. Nowadays, fundamental catalysis studies are increasingly performed at conditions closer to those of practical catalytic reactors. However, most of these studies are missing information on the gas phase and how it interacts with the catalyst. That situation has changed. Researchers have developed a suite of approaches to improve scientific understanding of the interactions between the catalyst surface and the near-surface gases at conditions relevant to actual operating catalysts. They have shown that a combination of mass spectrometry and laser diagnostics techniques can identify the chemicals present in the gas phase and provide spatial maps of their distribution.

In industry, catalytic processes occur under conditions different from the ultra-high vacuum found in many laboratory studies. At higher pressures, the gas can have more pronounced interactions with the surface, and there is a greater probability of chemical reactions occurring in the gas phase. However, most laboratory studies focus on detection of molecules on the catalyst surface and do not probe the gases just above the surface. This new research demonstrated that in situ measurements using laser-induced fluorescence, Raman scattering and mass spectrometry give researchers images of the near-surface gas phase above a silver catalyst during the partial oxidation of methanol. Industry uses this reaction to produce formaldehyde, an important chemical. Researchers can use insights from these images to improve their models of catalytic reactions at realistic operating pressures and temperatures. Furthermore, these gas-phase measurements can provide a more complete picture of the interactions between the gas phase and catalyst surface.

The researchers investigated the partial oxidation of methanol in the gas phase using silver as the catalyst. Scientists do not fully understand this heterogeneous catalysis reaction mechanism, which is widely used to produce formaldehyde, a valuable commodity chemical. In particular, scientists have limited knowledge of the formation of intermediates and by-products in these reactions.

To help address this knowledge gap, researchers from Sandia National Laboratories in collaboration with the University of California-Davis and Lund University in Sweden have developed a suite of approaches to improve understanding of the interactions between the catalyst surface and the near-surface gases at conditions relevant to actual operating catalysts. The researchers performed spatially resolved gas-phase measurements of stable and reactive species above the catalyst surface, using near-surface 2D laser-induced fluorescence imaging, 1D Raman scattering and molecular beam mass spectrometry (MBMS). Planar laser-induced fluorescence and Raman scattering provided rapid, non-intrusive imaging of CH3OH, O2, CH2O, H2O and temperature with high spatial resolution, whereas mass spectrometry detected all species simultaneously with lower spatial resolution, including unexpected species for which the formation mechanism remains uncertain.