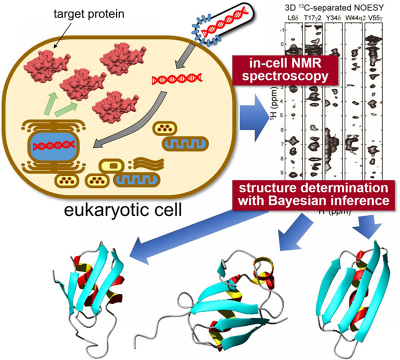 Eukaryotic cells are the building blocks of a vast range of organisms, including all fungi, plants and animals. Their internal structure is extremely complex and varied, with an intricate structural hierarchy and a vast range of biomacromolecules distributed around a cytoskeletal network. This has made it difficult to see what each protein inside the cells does in its natural environment, despite the obvious biomedical benefits of knowing, for example, how a particular protein reacts when cells are subjected to chemical stimuli, like pharmaceutical drugs.

To tackle this challenge, a team from Tokyo Metropolitan University led by Assistant Professor Teppei Ikeya and Professor Yutaka Ito applied NMR spectroscopy measurements to specific proteins expressed inside sf9 cultured insect cells, a strain of cells originally derived from a type of moth larva widely used for protein production. The team’s NMR work had already succeeded in elucidating high-resolution protein structures inside bacteria (non-eukaryotes). The problem with simply applying the same techniques to proteins in sf9 cells was the significantly lower concentration of target proteins and short lifetime of cells, making it difficult to collect high quality multi-dimensional NMR spectra for nuclear Overhauser effect spectroscopy (NOESY) which would give precise information about how different atoms are spaced inside individual molecules. Thus, they combined a sparse sampling-based rapid NMR measurement scheme with state-of-the-art computational methods employing statistical techniques like Bayesian inference, methods tailored to elucidate protein structures efficiently based on a limited amount of structural information from in-cell NMR spectra with inherently low-sensitivity. A bioreactor system was also equipped inside the NMR apparatus which kept the cells in a healthy state during the measurements.

With this new data, the team were able to elucidate the 3D structure of three model proteins with unprecedentedly high resolution, with a precision of 0.5 Å for the position of the protein’s main chain atoms. In particular, they identified a significantly different conformation in a localised region of one of the proteins compared to its reference structure in dilute solution. The conformational difference between proteins “in cells” and “in test tubes” was presumably caused by non-specific interactions with other molecules inside the cells. It is becoming clear that these interactions contribute to the proteins’ biological functions: the ability to locate and quantify structural changes of proteins in an intracellular environment is expected to have a significant impact on biomedical research, making it possible to see how different conditions, e.g. neurodegenerative diseases, affect protein conformations in situ, and quantitatively gauge how treatments impact structural anomalies.