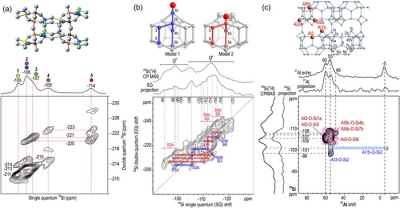 Zeolites are important inorganic crystalline microporous materials with a broad range of applications in catalysis, ion exchange and adsorption/separations. Due to their unique pore structure, high thermal stability and tuneable acid‒base property, zeolites are one kind of the most important heterogeneous catalysts used in the petrochemical and fine chemical industries. The design of efficient zeolites with improved properties depends on the understanding of the structure–activity relationship, which requires the fundamental characterization about the zeolites. Solid-state NMR (ssNMR) spectroscopy is a well-established tool for the study of zeolites and relevant catalytic reactions because of its advantage in providing atomic-level insights into molecular structure and dynamic behaviour.

In a new review, scientists at the State Key Laboratory of Magnetic Resonance and Atomic and Molecular Physics, Innovation Academy for Precision Measurement Science and Technology, Chinese Academy of Sciences in Wuhan, China, summarise the recent advances in ssNMR of zeolite catalysts, mainly covering the new applications of ssNMR to investigate zeolite framework structure, catalytically active sites, intermolecular interactions and catalytic reaction mechanisms. The authors also discuss the current limitations and the future prospects of ssNMR for its application in zeolite catalysts.

The authors indicate that, combined with advanced instrumentation and experimental techniques, ssNMR has demonstrated to be a powerful analytic tool in zeolites characterisation. The direct detection of framework structure and acid sites is enabled by using various 1D and 2D ssNMR methods. The obtained knowledge has made it possible for zeolite scientists to optimise zeolites with improved catalytic performance in many important reactions such as methanol conversion, cracking of hydrocarbons and oligomerisation of alkenes. Meanwhile, 1D and 2D correlation spectroscopy allows ssNMR to probe the internuclear spatial proximities, which are associated with host‒guest and guest‒guest interactions in zeolites. The characterisation of various interactions allows scientists to gain better understandings in zeolite synthesis, adsorption/desorption and catalytic reactions. Moreover, the utilisation of ssNMR for the observation and identification of critical active intermediates in zeolite-catalysed reactions has become a key approach for the elucidation of reaction mechanism. The knowledge on the reaction mechanism and the involved intermediates has been applied to the synthesis of new zeolites capable of controlling reaction pathway in a complex reaction such as methanol conversion.