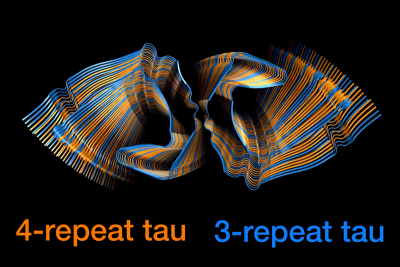 One of the hallmarks of Alzheimer’s disease is the presence of neurofibrillary tangles in the brain. These tangles, made of tau proteins, impair neurons’ ability to function normally and can cause the cells to die. A new study from MIT chemists has revealed how two types of tau proteins, known as 3R and 4R tau, mix together to form these tangles. The researchers found that the tangles can recruit any tau protein in the brain, in a nearly random way. This feature may contribute to the prevalence of Alzheimer’s disease, the researchers say.

“Whether the end of an existing filament is a 3R or 4R tau protein, the filament can recruit whichever tau version is in the environment to add onto the growing filament. It is very advantageous for the Alzheimer’s disease tau structure to have that property of randomly incorporating either version of the protein”, says Mei Hong, an MIT professor of chemistry.

In the healthy brain, tau functions as a stabiliser of microtubules in neurons. Each tau protein is made up of either three or four “repeats,” each consisting of 31 amino acid residues. Abnormal versions of either 3R or 4R tau proteins can contribute to a variety of diseases. Chronic traumatic encephalopathy, caused by repetitive head trauma, is linked to abnormal accumulation of both 3R and 4R tau proteins, similar to Alzheimer’s disease. However, most other neurodegenerative diseases that involve tau feature abnormal versions of either 3R or 4R proteins, but not both.

In Alzheimer’s disease, tau proteins begin to form tangles in response to chemical modifications of the proteins that interfere with their normal function. Each tangle consists of long filaments of 3R and 4R tau proteins, but it wasn’t known exactly how the proteins combine at the molecular level to generate these long filaments. One possibility that Hong and her colleagues considered was that the filaments might be made of alternating blocks of many 3R tau proteins or many 4R tau proteins. Or, they hypothesised, individual molecules of 3R and 4R tau might alternate.

To produce their filaments, the researchers began with abnormal tau proteins taken from postmortem brain samples from Alzheimer’s patients. These “seeds” were added to a solution containing equal concentrations of normal 3R and 4R tau proteins, which were recruited by the seeds to form long filaments. To the researchers’ surprise, their NMR analysis showed that the assembly of these 3R and 4R tau proteins in these seeded filaments was nearly random. A 4R tau was about 40% likely to be followed by a 3R tau, while a 3R tau was a little more than 50% likely to be followed by a 4R tau. Overall, 4R proteins made up 60% of the Alzheimer’s disease tau filament, even though the pool of available tau proteins was evenly divided between 3R and 4R. Within the human brain, 3R and 4R tau proteins are also found in roughly equal amounts.

This type of assembly, which the researchers call “fluent molecular mixing,” may contribute to the prevalence of Alzheimer’s disease, compared to diseases that involve only 4R or 3R tau proteins, Hong says.

“Our interpretation is that this would favour the spread and the growth of the toxic Alzheimer’s disease tau conformation,” she says.

Working with collaborators at the University of Pennsylvania School of Medicine, led by Professor Virginia Lee, the researchers showed that the tau filaments they generated in the lab have a structure very similar to those seen in human patients with Alzheimer’s disease, but they do not resemble filaments grown exclusively from normal tau proteins. The tau filaments that they generated also replicated the toxic effects of Alzheimer’s tangles, forming aggregates in the dendrites and axons of mouse neurons grown in a lab dish.

The current work focused mainly on the structure of the rigid inner core of the filaments, but the researchers now hope to further study the structure of the floppier protein segments that extend out from this core. “We would like to figure out just how this protein goes from a healthy and intrinsically disordered state to this toxic, misfolded and beta-sheet rich state in Alzheimer’s disease brains,” Hong says.