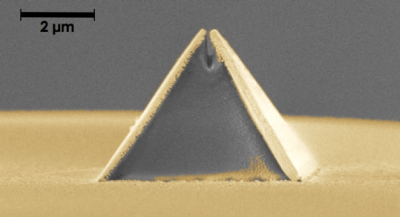 Four years ago, the Molecular Foundry (a nanofabrication facility at the Lawrence Berkeley National Laboratory in the USA) developed the Campanile probe. Its tapered, four-sided shape resembles the top of the Campanile clock tower on UC Berkeley’s campus. The probe is mounted at the end of an optical fibre, and focuses an intense beam of light onto a much smaller spot than is possible with current optics. This enables spectroscopic imaging at a resolution 100× greater than conventional spectroscopy.

However, initial production methods were slow: one a month. Now, a new method using fibre nanoimprinting can increase production to one every few minutes. This enables commercial production, wider use of the technology and the ability for researchers to have “spares” in case of breakages (which are not uncommon!). Their research is reported online May 10 in Scientific Reports.

This and other nano-optical structures which squeeze and manipulate light in ways that are unachievable by conventional optics. Nano-optics have the potential to be used for imaging, sensing as well as spectroscopy.