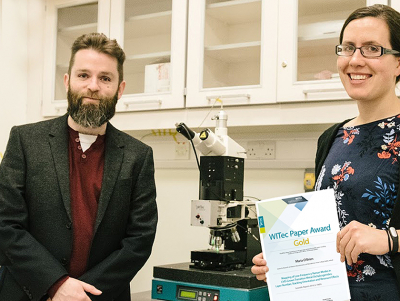 From nearly 60 submissions for the 2017 WITec Paper Award, the WITec jury selected the three best publications. They were written by scientists from Ireland, Portugal and Germany who used WITec correlative confocal Raman microscopes to study transition metal dichalcogenides, textile fibres and cement. These papers show how information on the chemical and structural composition of a material, obtained through this non-destructive technique, can lead to a more comprehensive understanding of a wide range of materials.

The Gold Paper Award is made to Maria O’Brien from Trinity College in Dublin (Ireland) for mapping low-frequency Raman modes of four transition metal dichalcogenides (TMDCs): MoS2, MoSe2, WS2 and WSe2. Together with Niall McEvoy, Damien Hanlon, Toby Hallam, Jonathan Coleman and Georg Duesberg, she used the Raman modes for in-plane and out-of-plane vibrations whose intensities depend on the thickness and the stacking order of the molecules’ layers. The study has shown that the low-frequency Raman modes of these materials reveal additional information compared to conventional Raman modes. The scientists are convinced: “This study presents a major stepping stone in the fundamental understanding of layered materials as mapping the low-frequency modes allows the quality, symmetry, stacking configuration and layer number of 2D materials to be probed over large areas.” They suggest using low-frequency Raman mapping for the analysis of TMDCs that show no significant changes correlated to layer numbers in the high-frequency regions of their Raman spectra. https://doi.org/10.1038/srep19476

The Silver Paper Award is given to Helena Nogueira from the University of Aveiro (Portugal). She and her co-authors Sara Fateixa, Manon Wilhelm and Tito Trindade used three-dimensional Raman imaging and surface enhanced Raman scattering (SERS) to monitor the dyeing process of linen textile fibres with methylene blue. This dye is most commonly used for blue colouring and was applied by various procedures. The scientists also visualised how the silver nanoparticles that give textiles antimicrobial properties are distributed along and within the linen fibres. The authors conclude that regarding textile production “…Raman imaging and SERS are valuable assets that complement or eventually provide unique characterization data.” https://doi.org/10.1002/jrs.4947 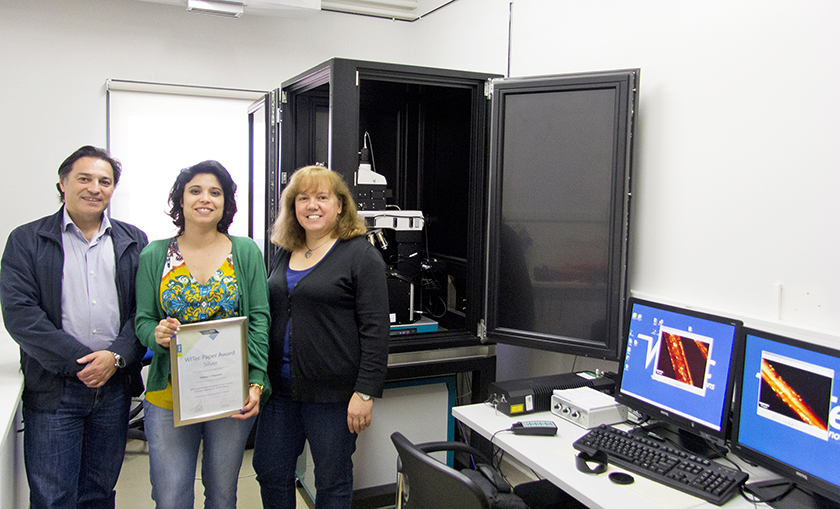 The Bronze Paper Award goes to Jonas Higl from the University of Ulm (Germany) for a Raman study on hydrating of cementitious materials. With his colleagues, Marcus Köhler and Mika Lindén, he used confocal Raman microscopy to document which structures and molecules are formed during the complex process of hydrating C3S clinker. To the knowledge of the authors this study was the first published using Raman imaging to study hydrating of cement. https://doi.org/10.106/j.cemconres.2016.07.005 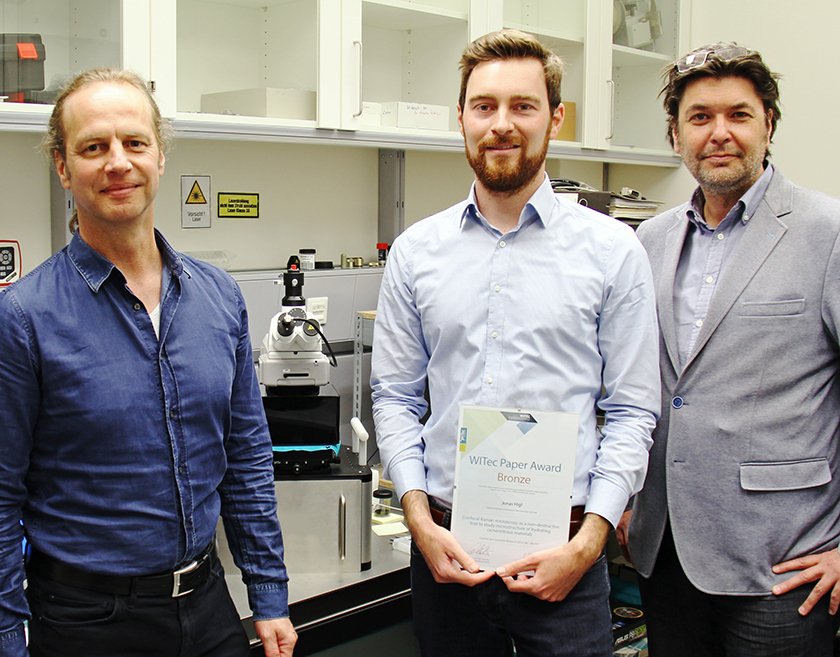 The annual awards recognise outstanding scientific work published the preceding year that employed a WITec device as part of its experimental setup. The evaluation criteria include the significance of the results for the scientific community and the originality of the techniques used.

WITec have announced the 2018 WITec Paper Award competition for research articles published in 2017. Scientists from all fields of application in both academia and industry are invited to submit their publications featuring results acquired with a WITec instrument to [email protected]. The deadline for submissions is 31 January 2018.