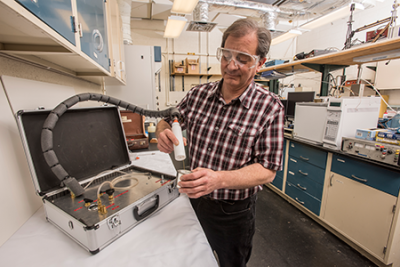 A chemist at the National Institute of Standards and Technology (NIST) has developed a portable version of his headspace method for recovering trace chemicals such as environmental pollutants and forensic evidence including secret graves and arson fire debris. The underlying technique is PLOT-cryoadsorption, or PLOT-cryo—short for porous layer open tubular cryogenic adsorption. PLOT-cryo is sensitive, quantitative and more broadly useful than many competing techniques. It can identify compounds that do not readily evaporate and is not limited to samples dissolved in water, for example. The method recovers vapours by suction or by sweeping a gas across the air above a sample of interest. The laboratory version of the technique has been used to find traces of explosives, spoiled food, residues in arson debris and grave soil.

The new portable kit collects trace chemicals while analysis is performed with other techniques such as GC-MS, which can also be made portable. In initial demonstrations of the kit in the lab, chemist Tom Bruno recovered and reliably identified substances such as the chemical compound coumarin, the explosive TNT and diesel fuel. Collection times as fast as 3 s produced definitive results. The kit detected diesel fuel—a concern with respect to illegal dumping and leaking tanks—with a sensitivity better than one part per million. There is no other portable instrument that can detect traces of as wide a range of these types of compounds, Bruno says.

The NIST kit is powered by compressed air, which enables operation without electrical power and ensures safety in potentially flammable and explosive environments. Compressed air is available on many emergency response vehicles. A key component of the kit is a vortex tube, which, without any moving parts, rotates compressed air to make hot or cold air streams. Vapours are collected in sturdy, inexpensive tubes embedded in an epoxy wafer. The wafer can be used inside either an insulated handpiece for manual sampling or a longer probe for remote sampling of soil and spaces under buildings or in luggage or other containers. With either the handpiece or probe, the wafer can be chilled to collect vapours, and then heated to help remove them.

For now, the portable kit is less sensitive than the lab version of the method, but research continues to improve performance. Bruno has fielded interest in the basic technique from an instrument company, detectives and film producers looking for a missing explorer. Companies interested in commercialisation should contact the NIST Technology Partnerships Office at [email protected].