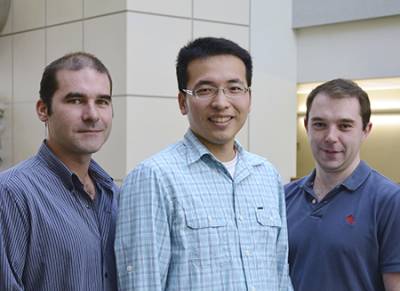 “We found that even relatively low temperatures used in GC-MS can have a detrimental effect on small molecule analysis”, said study senior author Gary Siuzdak, senior director of TSRI’s Scripps Center for Metabolomics. Using new capabilities within XCMS, a data analysis platform developed in the Siuzdak lab, the researchers observed small molecules transforming—and even disappearing—during an experiment designed to mimic the GC-MS process, throwing into question the nature of the data being generated by GC-MS.

For more than 50 years, chemists and biologists have used GC-MS to identify and measure concentrations of small molecules. The new experiments were initiated when Siuzdak was preparing a short course for students at the American Society for Mass Spectrometry annual meeting. The question arose of how heat from the GC-MS vaporisation process could affect results, so Siuzdak and TSRI Research Associate Mingliang Fang ran a set of experiments to compare how small molecules responded to thermal stress. To their surprise, the molecular profiles of as many as 40% of the molecules were altered, suggesting that heat from the GC-MS process could dramatically change the chemical composition of the samples.

“The results were quite astounding—as this is a technology that has been used for decades”, said Siuzdak. The finding led the researchers to take a closer look at how molecules degrade and transform during GC-MS. They analysed small molecule metabolites heated at 60°C, 100°C and 250°C to mimic sample preparation and analysis conditions. The team used XCMS combined with a low-temperature liquid chromatography mass spectrometry technology which has been previously shown not to degrade molecules thermally, to determine the extent of the thermal effects. They observed significant degradation even at the lower temperatures. At the higher temperatures, almost half of the molecules were degraded or completely transformed.

“In retrospect, there was very little to be surprised about: heat degrades molecules”, said Siuzdak. “However, we’ve simply taken for granted the extent of thermal degradation. While this is a negative result and scientists rarely publish them, I felt compelled especially for the students just getting started in their careers to report the limitation of such a ubiquitous technology.” The work has been published in Analytical Chemistry.

The researchers noted that even molecules not typically observed in GC-MS can also be transformed; for example, the energy metabolite adenosine triphosphate (ATP) was readily converted into adenosine monophosphate (AMP). This transformation is relevant for medical research because scientists often use a heating process to look at the ratio of ATP to AMP in cells to estimate the function of cellular components in aging and disease.

“People use this ratio to detect disease, but if the ratio can be changed by the heating process, the results will not be accurate”, said Fang. “It is known that ATP is thermally sensitive, but not how it changed under these conditions.”

Thermal degradation could also explain why many scientists have detected many unknown molecular “peaks” in the past. Based on the new study, the researchers now believe these metabolites may be by-products of the heating process—the result of reactions between metabolites as they degrade.

So why hadn’t scientists figured out the effect of heating until now? Siuzdak explained that while some scientists had noticed changes in specific metabolites, it was difficult to see changes in overall molecular profiles that contain thousands of molecules. This omic-based study was made possible by new capabilities within the XCMS program developed at the TSRI Scripps Center for Metabolomics. XCMS is a free, cloud-based data analysis technology used to analyse mass spectrometry data all over the globe.

“With XCMS, we could expand our study to obtain a global profile of how the metabolites were altered—not just a few compounds”, said Fang.

“Fortunately these problems can be overcome with the use of standards in GC-MS as well as using newer, ambient temperature mass spectrometry technologies, and this report will likely stimulate more scientists to move to these less destructive alternatives”, said Siuzdak.