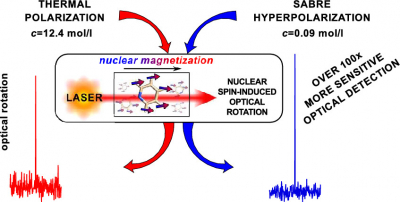 The nuclear magneto-optic (NMO) phenomena, the first of which has been observed in 2006, enable emerging methods for studies of materials and molecules. NMO effects arise from the magnetic moments of nuclei which, if properly oriented in space, can cause small changes in the properties of light as it passes through the material. With its ability to look into the matter at the resolution of individual atoms, without permanently altering the sample properties, NMO approaches offer a valuable window into the properties of matter that only a few methods can give. In this respect, the NMO methods are similar to NMR spectroscopy.

The NMR Research Unit at the Faculty of Science of the University of Oulu in Finland has been active in the field of NMO since 200. Lately, the group has also been involved in the development of experimental NMO techniques. The ultimate aim of the NMO research is to provide high-sensitivity optical data with atomic-resolution about the studied material. It is crucial to improve the spectroscopic sensitivity, so that smaller samples can be measured and higher-quality information can be obtained.

The sensitivity improvement can be gained by hyperpolarisation, when the magnets of the atomic nuclei are oriented in the desired direction to a far greater degree than possible under ambient conditions. In a paper, published in The Journal of Physical Chemistry Letters, Petr Štěpánek and Anu Kantola of the NMR Research Unit have shown how this can be achieved via the use of specially prepared hydrogen gas.

Hydrogen gas molecules can be present in two forms, ortho- and para-hydrogen, which differ by the mutual orientation of their own two nuclear magnetic moments. The high degree of orientational order contained in the gas that contains an excess of para-hydrogen, can, via a catalytic reaction, be transferred to the studied molecule, leading to an increase in the observed signal.

The researchers have used this method in a new combined approach and improved the sensitivity of NMO measurements by a factor of more than one hundred. This allows measurements of substances that would otherwise not be viable and opens new possibilities for further development of this new and exciting field.

NMR may uncover secrets about male infertility
25 May 2017