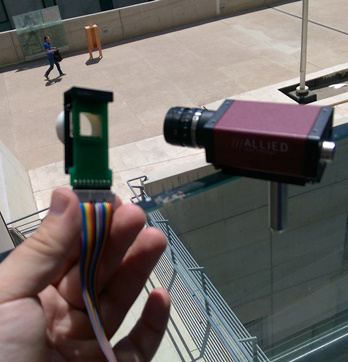 Researchers at Ben-Gurion University of the Negev (BGU) have developed miniaturised hyperspectral technology as an add-on for a standard camera that will generate superior quality images and video faster and at a lower cost than currently available commercial devices.The BGU device, developed by four BGU researchers, can re-purpose a standard camera for many applications. The device is only a few tens of µm wide and is easy to produce, using commonly available materials such as liquid crystal.

Professor Adrian Stern, head of BGU’s Unit of Electro-Optical Engineering says, “The technology uses our software based on ‘compressive sampling’, which minimises collection of redundant data during image capture, making the camera at least 10 times faster and creates spectral images of a markedly superior quality." Compressive sampling captures signals and images from much fewer samples or measurements than the traditional Nyquist–Shannon sampling theorem on which cameras and sensing devices have been based for 100 years.

“Instead of using a large and heavy prism inside the camera, we developed a very small, tunable filter and sensor that are activated by electrical current”, says Professor Dan Blumberg, BGU vice president and dean for research and development, who is also part of the research team. “Every time the current changes, a photo is taken.”