LIBS of skid marks may identify cars in accidents 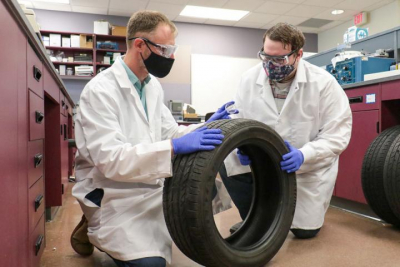 Skid marks left by cars are often analysed for their impression patterns, but they often do not provide enough information to identify a specific vehicle. Matthieu Baudelet and his forensics team at the National Center for Forensic Science, University of Central Florida are proposing the use of laser-induced breakdown spectroscopy (LIBS) to collect evidence from those skid marks.

“Tire evidence is often overlooked in forensics”, says Baudelet. “In cases of hit and runs or accidents involving multiple cars the chemical signature of the tires have the potential to be integral information to the investigation.”

Baudelet and his graduate student, John Lucchi, started testing their idea by recreating skid marks in the laboratory using road materials like concrete and asphalt. By pressing a tyre into the surface at the same velocity as a moving vehicle, a braking impression is made on the laboratory-controlled “road” from the tyre. This in turn gives the team a chance to analyse the chemical composition of the tyre and the road material and make chemical comparisons.

Every tyre is expected to have its own chemical signature and, as such, a unique, corresponding skid mark. One current challenge is identifying how elements on the road like oil, rainwater and other cars interfere and change that signature. Baudelet says the National Center for Forensic Science has been working on overcoming these interference challenges with other evidence for years.

Now that the process shows promise, the team will focus on establishing statistical reliability. Currently, using principal component analysis combined with linear discriminant analysis, a classification accuracy close to 99 % has been found. Standards for police evidence are justifiably high, so next steps involve reproducible, dependable protocols, Baudelet says. Ultimately, he would like to know his team’s work provided justice and closure to cases of hit-and-run and vehicle violence.

“We’re still working but so far we’ve made a lot of progress”, Baudelet says. “I feel that this can be a great supplementation to the methods currently being used in forensics and law enforcement.”