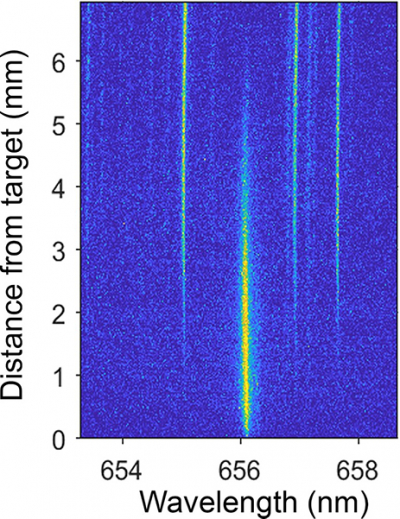 In a new study, investigators report an optimised approach to using laser-induced breakdown spectroscopy (LIBS) for analysing hydrogen isotopes. Their new findings could enable improved rapid identification and measurement of hydrogen and other light isotopes that are important in nuclear reactor materials and other applications. LIBS is promising for measuring hydrogen isotopes because it requires no sample preparation and data can be rapidly acquired with a relatively simple experimental setup. However, quantifying the concentration of hydrogen has been challenging with this analytical technique.

Researchers from Pacific Northwest National Laboratory show that combining an ultrafast laser with certain environmental conditions helps improve LIBS measurements of hydrogen isotopes in industrially important alloys. This optimised technique could enable a faster analysis of materials that have been irradiated in nuclear reactor cores.

“Improved chemical imaging of hydrogen isotopes, like what we performed in this work, can be used to monitor the behaviour of materials in nuclear reactors that provide us with electricity”, said research team leader Sivanandan S. Harilal. “It can also be very valuable for the development of next generation materials for hydrogen storage that can enable new energy technologies and for analysing material corrosion when exposed to water.”

In the new work, the researchers worked to find the best conditions for measuring hydrogen isotopes in Zircaloy-4. Zirconium alloys are widely used in nuclear technology, including as cladding for nuclear fuel rods in pressurised water reactors. Measuring how much hydrogen the material picks up during reactor operation is important for understanding the material performance.

Using LIBS for detecting specific isotopes requires measuring extremely narrow emission spectra of atoms. This is difficult for isotopes of lighter elements such as hydrogen because the extreme temperatures—10,000 K or higher—of laser-produced plasmas broadens the spectral lines. For the study, the researchers performed LIBS with different plasma generation conditions by using various lasers to generate plasmas and by testing different analysis environments. They collected emitted light at different times after the plasma was generated and at different distances from the sample using spatially and temporally resolved spectral imaging, or 2D spectral imaging.

“2D spectral imaging let us track where and when emission from hydrogen isotopes was the strongest”, said Harilal. “Because of the multiple species present in a plasma plume and its transient nature, it is critical to analyse plasmas in a spatially and temporally resolved manner.”

The results showed that plasmas produced by ultrafast lasers were better for hydrogen isotopic analysis than traditional nanosecond laser-produced plasmas and that generating the plasmas in a helium gas environment with moderate pressure provided the best analysis conditions.

“Hydrogen is present in all environments, making it challenging to distinguish the hydrogen that needs to be measured from that in the environment using any analytical technique”, said Harilal. “Our results show that ultrafast LIBS is capable of differentiating hydrogen impurities from solute hydrogen.”

The researchers plan to perform additional studies to further optimise the use of ultrafast lasers for hydrogen isotopic analysis with LIBS.