Near infrared spectroscopy unlocks the secrets of mammalian diving success

Diving animals, such as seals, dolphins, otters, turtles and penguins, share the same physiological constraints as we humans do when we enter back into our evolutionary home—the sea. The most instantly identifiable constraint if you put your head underwater is, of course, the inability to breath and the associated progressive asphyxia. This division between where an animal spends most of its time and where it can breathe has had a significant impact on the physiological capacities of diving animals. It is important to consider diving animals, such as seals, as “underwater animals which make only occasional brief excursions into ‘our world’ to breathe”. They are not “animals from ‘our world’ that periodically dive underwater”. This is more than just a semantic differentiation. Instead it is necessary to contextually understand the relationship between the physiology and lifestyle of diving animals.

One essential physiological prerequisite that equips divers, such as seals, for this profoundly different lifestyle is greater total body oxygen stores. Greater oxygen stores alone though do not make a consummate diver. A collective suite of cardiovascular responses to diving that help reduce the rate of oxygen depletion are referred to as the “dive response” and are the essential component of elite diving physiology. The most classic feature of the dive response is a reduction in heart rate—known as bradycardia. A reduction in heart rate alone does nothing to reduce the rate of oxygen consumption. Rather a reduction in heart rate couples a major redistribution of blood around the body, whereby blood flow to parts of the body like the skin, limbs and to some organs is reduced. It is this component of dive response which really conserves oxygen. Essentially this works by reducing the delivery of blood oxygen to parts of the body that would otherwise use and deplete oxygen stores. Instead the dive response helps to ensure conservation and delivery of oxygen-filled blood to priority organs, of which the brain is, of course, the most highly prioritised. Anyone one who has experienced a stroke, or fainted at the sight of a needle, will know only too well the extreme effects of an interruption of blood oxygen supply to the brain. The associated reduction in heart rate that goes along with blood redistribution during diving avoids a precipitous rise in blood pressure.

While this blood redistribution component is the essential “tool” of the dive response that facilitates diving, we know surprisingly very little about blood redistribution in diving animals. For the most part this has been the result of a lack of non-invasive and wearable technology that can measure changes in blood redistribution and what is known comes from lethal experiments of animals forced to dive involuntarily. Because of the nature of diving animals—they dive and swim—it means technology has to be wearable and non-invasive in order to be deployable on an animal that is free to choose to dive and swim of its own volition; for it’s in this voluntary free-diving state where we can learn about the true dynamics of the cardiovascular system and understand how diving animals manage it to utilise their environment. Basically, what we want to do is to let the animals tell us their physiological “story” without us having to interfere at all and certainly to avoid unethical or invasive procedures. One technology that offers an insight into blood redistribution is the remarkable non-invasive, wearable, optical technology of near infrared (NIR) spectroscopy. NIR spectroscopy uses light emitted in contact with the skin to measure blood volume and oxygenation in the underlying tissue (Figure 1). These two metrics have provided a remarkable new insight in the dynamics of blood redistribution in voluntarily diving seals. 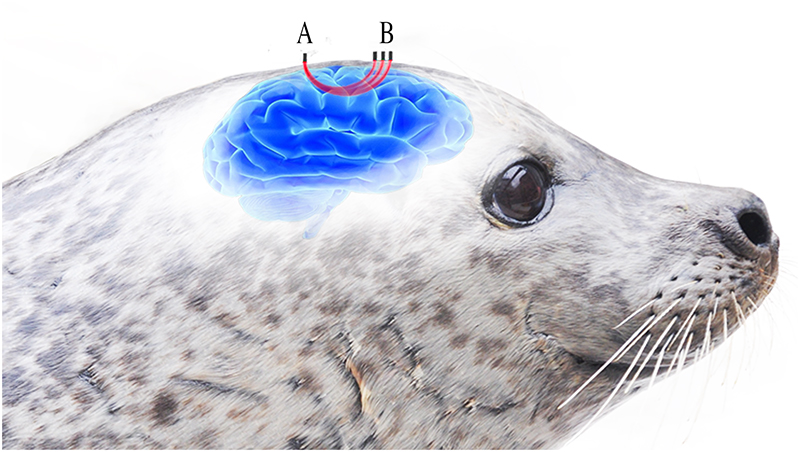 Figure 1. Three LEDs (B) emitting light around the wavelengths for oxygenated and deoxygenated haemoglobin are placed at different distances from the detector (A). The light passes through the underlying tissue before reaching the detector (A) in contact with the seal’s skin. Increasing distance between the LEDs and detctor provides varying depths of optical penetration within the underlying tissue. Reproduced from Reference 1 under a Creative Commons Attribution licence.

Deploying optical spectroscopy equipment on a voluntarily diving seal is far from a simple technological step and required some important mechanical adaptations. Two key adaptations necessary were marinising the equipment and making it suitable for attachment to a seal. Starting with a commercially available NIR system (Artinis PortaLite-mini, Artinis Medical Systems BV, Einsteinweg, Netherlands), we used potting techniques frequently used to house a suite of existing animal-borne instrumentation that are deployed on deep diving seals from the Artic to Antarctic.2 The sensor body was housed in an aluminium case with a removable O-ring sealed lid which provided water- and pressure-proofing, but also made the system robust to the “wear and tear” we expect from having a system on a non-domesticated animal. The light emitting diodes, photodiode receiver and printed circuit boards (PCBs) of the sensor head were housed in optically opaque polyoxymethylene housings filled with spectrally transparent epoxy. To ensure that epoxy encapsulated the electronics but did not cover the optical window on the optodes, the sensor head was cradled in a custom-built silicone mould. This allowed the internal components to be filled and waterproofed by epoxy but ensured the external surface and LEDs remained exposed to avoid affecting the fundamental optical properties of the LEDs.

To attach the system to a seal we used a combination of existing practices for seal instrumentation and developed novel attachment methods specifically for seal-borne NIR spectroscopy. The sensor body was bonded to the seal’s fur caudal to the base of the skull using superglue—as many seal-borne devices are. The sensor head, which must provide contact between the optics and skin, required a new attachment methodology. A small section of fur was removed to the level of the skin which provided a furless optical window. Around this window of exposed skin, a 3D printed sensor head cradle was bonded to the seal’s fur which secured the optics over the furless window and provided slight positive pressure on the optics against the skin.

The central focus of the study was to test to efficacy of NIR spectroscopy as an animal-borne tool. Thus, the fundamental technological and attachment issues, and finding how to overcome these problems, were central to the scope of the study. With that in mind, and the novel application of this technology, we had to rely on the assumptions that both the optical properties of seal tissues and haemoglobin were the same as those of humans, because this information hasn’t yet been published. That said, the assumptions have biologically relevant basis. First, initial work from the Department of Physics at the University of St Andrews has shown that the optical properties of seal tissues, taken from freshly dead animals (skin and blubber) have optical properties which fall within the published ranges for human skin and adipose tissue. Similarly, published data3 on the optical properties of northern elephant seal haemoglobin shows absorption peaks that are identical to cattle, sheep and multiple other mammalian species, including humans.

The marinised NIR system was deployed on voluntarily diving juvenile harbour seals (one of the two species of UK seals), see Figure 2. From the NIR data collected we were able to capture, for the first time, a level of cardiovascular control that we did not know seals possessed and frankly didn’t know existed at all. Specifically, we found that in seals the blood redistribution component of the dive response is under some degree of cognitive control and not a result of the stimuli, such as facial immersion or the cessation of breathing, which activates it in other animals and humans. We found that seals started to move blood away from their peripheral tissues (in this case blubber and skin) around 15 s before they begin each dive. What this allows seals to do is to prepare for a dive and actually enter into the oxygen conservation state before they dive, so that when they dive they are not “wasting” oxygen in the early stages of the dive. And if you, as seals do, spend 90 % of your time at sea diving then these seemingly small savings total up to very significant savings over hours, days, weeks and sometimes even months of diving at sea—especially when making 2 km dives for two hours like elephant seals. In that sense, the finding of cognitive control of moving blood around the body makes a lot of sense, particularly when considering that cognitive control of heart rate has been demonstrated in seals. Seals have been shown to be able to drop their heart rate on command and also match the reduction in heart rate for the anticipated duration of the following dive. Interestingly, when a seal intends to make a longer dive the reduction in heart rate is greater and matches the intended dive duration quite well. 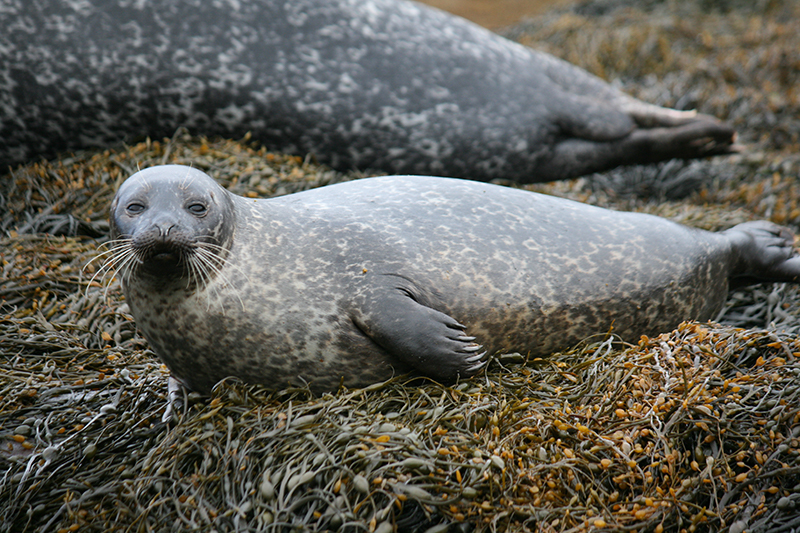 NIR spectroscopy technology may offer a new tool to understand the physiological envelope of diving mammals operating of their own volition at sea. Animal-borne instruments are fundamental tools in ecology and provide insight into the behaviour, movement and environment that are otherwise impossible to measure through standard observation techniques. Our understanding of the physiology of diving mammals, however, lags decades behind our understanding of behaviour. Yet, for animals that must breath-hold in order to operate in their environment, how they manage oxygen is essential to understand the responses and impacts of anthropogenic impacts on the sea. The non-invasive and small nature of NIR spectroscopy makes it an ideal tool to integrate into existing animal-borne technology.

I would like to acknowledge Steve Balfour and Sean McHugh of SMRU Instrumentation Group for developing the marinised system. Simon Moss, Ryan Milne and Matt Bivins for developing the attachment methodology. Thanks to each of my co-authors of Reference 1.