Spectroscopy plays a vital role in the forensic scientist’s task to analyse crime scene evidence. At the crime scene itself, the emphasis is on locating evidence which can be used to understand events that have occurred and to provide information about method and identity of the perpetrator. This area brings to mind the traditional television images of scene of crime officers (SOCOs) searching crime scenes with UV, white and coloured light: using photon scattering, absorption and fluorescence to provide enhanced contrast compared with normal conditions. Once the evidence has been collected, the analysis moves to the forensic laboratory, where a host of techniques are used to characterise and match evidential samples. Such techniques include UV-vis absorption, fluorescence, Fourier transform infrared (FT-IR), Raman and scanning electron microscopy/energy dispersive X-ray (SEM/EDX). Rarely will a single method provide the whole answer, hence the need for a comprehensive suite of instruments.

A new and emerging technique within the forensic field is X-ray fluorescence (XRF) microscopy. The power of X-ray fluorescence itself is generally well acknowledged—fast non-destructive elemental analysis (typically for sodium 11Na to uranium 92U) suitable for accurate quantitative characterisation in both % and parts per million (ppm) regimes. For the forensic scientist such properties, whilst attractive, often cannot be applied, because in the majority of cases crime scene samples are microscopic in nature. A traditional bench-top XRF system has an analysis spot of perhaps 3–5 cm, and is unsuited to analysis of a 100 µm glass fragment, for example.

The development of highly efficient X-ray optics has allowed the development of bench-top XRF systems which have high intensity X-ray beams with diameters ranging from 10 micrometres through to a few millimetres. Coupled with integrated high magnification optical cameras, these systems are ideally suited to the needs of the forensic scientist. A microscopic particle from a crime scene can be analysed without any sample preparation, simply located using optical cameras and motorised sample stages, and subsequently characterised for elemental content. Furthermore XRF mapping creates detailed element distribution maps of heterogeneous materials.

This article presents an overview of the use of micro-XRF for forensic analysis, and shows analysis results of typical samples. However, it can in no way be considered a comprehensive survey, since over a matter of years almost every possible type of sample is likely to pass its way through a forensic laboratory.

When a gun is fired, in addition to the bullet many other materials exit the barrel of the weapon, and these are collectively termed gun shot residue (GSR). GSR is mainly comprised of gunpowder (unburnt and partially burnt gunpowder particles, and carbonaceous soot), ignition primer (typically calcium, lead, barium and antimony complexes), and metals (from the cartridge case, bullet, bullet coating and metal jacket—often containing brass or lead, sometimes with nickel coatings, and lead or antimony from the bullet core).

GSR can travel 1–2 m from the barrel, and so will often be deposited on the victim and perpetrator of the crime—however, at these distances the residues will be very disperse. As the distance between weapon and victim decreases, the GSR will become more concentrated, and within 30 cm will leave visible marking around the wound.

Analysis of GSR and their patterns provide forensic scientists with vital information about shooting conditions, and the chemical characteristics of a specific GSR can be used to confirm that a suspect has been in close proximity to a gun being fired, has handled a fired gun or fired the gun themselves.

Figure 1 shows XRF element images illustrating the GSR patterning caused by a 0.22 calibre rifle fired through the vibrantly coloured textile.1 In this case the spread of material is low, indicating a relatively small firing distance. Analysis of an individual particle highlights the presence of barium and lead originating from the ignition primer. 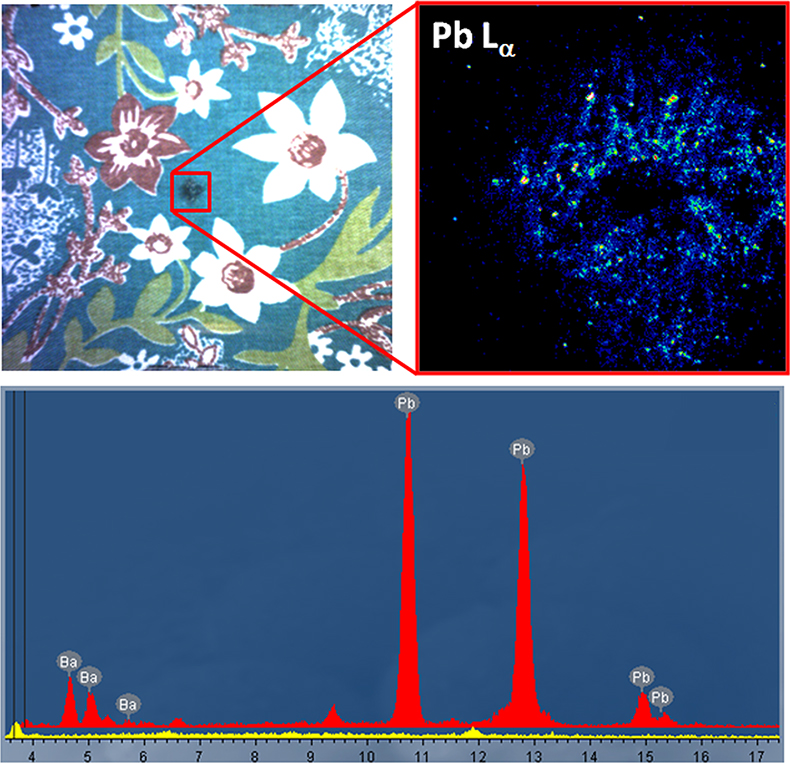 Glass is a common evidence type, typically relating to cases of unlawful entry into buildings and vehicle theft and accidents. Although the bulk composition of glasses used for domestic doors/windows, vehicle windows and headlamps is often very similar within the glass type, subtle differences in many varied trace elements can be used to discriminate them. These trace elements can result from a specific manufacturing process, be introduced to cause a certain effect (for example, colouring) or originate from the raw materials used.

Data to show that two glasses are of the same composition can be used to link a vehicle or suspect to a scene of crime. For example, if a microscopic fragment of glass found lodged within a suspect’s clothing matches that of a broken window at a house then it provides compelling evidence that the suspect was present at the crime scene. Figure 2 shows two data sets acquired from glass fragments. A typical optical image of a <100 µm particle is shown (Figure 2A). Figure 2B shows data acquired from the two sides of a single glass particle. The difference is tin—indicative that this is float glass. Float glass is made by pouring molten glass onto a bed of molten tin; the lower density of the glass means that it floats on the perfectly flat tin substrate, and thus can be formed into large flat sheets. Such glass is widely used for windows, whereas bottle glass is generally not produced using the float method.

With large pieces of glass other techniques, such as UV excited fluorescence analysis, can be used to characterise the glass, but for very small fragments only micro-analytical techniques such as XRF are suitable. Such analysis allows very fast confirmation as to whether a glass particle found in a suspect’s clothing is from a window (possible relating to a burglary) or basic bottle glass from a normal domestic accident.

Analysis of two differing glasses illustrate the ease with which micro-XRF can be used to distinguish them (Figure 2C). Note the clearly observed intensity difference for arsenic (arrowed peak in spectrum)—present as As2O3 at just 100 ppm (0.01%) in one sample, and not present at all in the other. 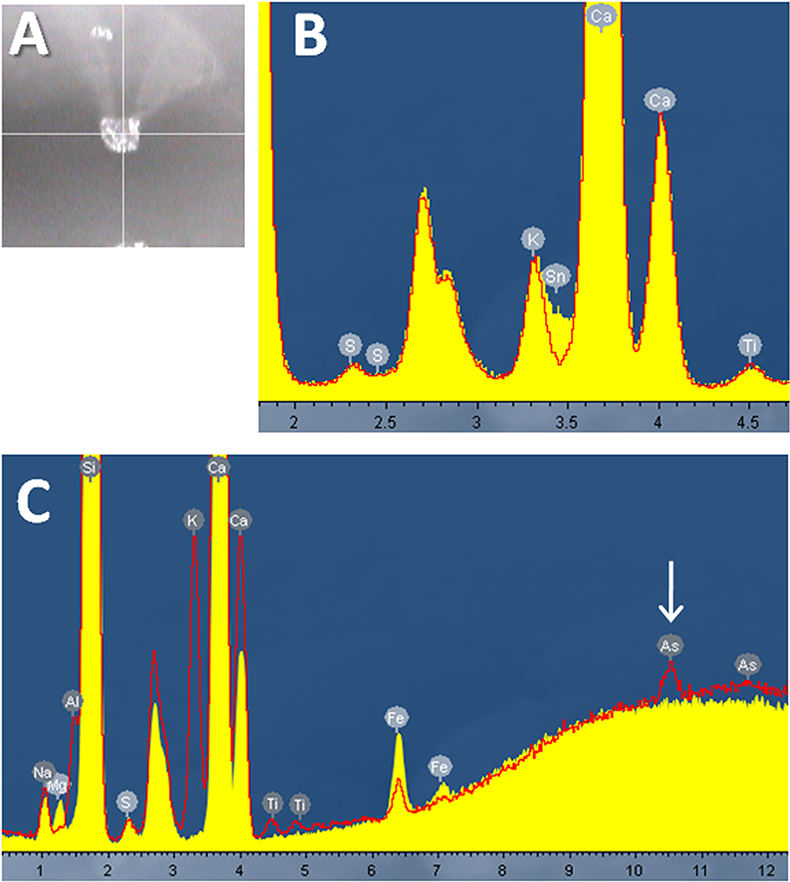 In a similar “matching” requirement to that discussed above for glasses, characterisation of automotive paint flakes can be used to link a vehicle to a specific crime. The paint structure on a vehicle is typically multilayered, including primers, base paint, and (in some cases) respray paint. Each manufacturer will create paints with specific additives to impart the desired properties (such as colour, binding, and scratch/weather resistance). Thus the paint flakes can have an almost unique signature based on the layer structure and elemental content. Micro-XRF is an ideal tool for analysis of such samples—high spatial resolution spot analysis of individual layers (typically presented in cross section) characterises the elements, and imaging illustrates the layered structure. Since the individual layers are often very thin (<50 µm) high spatial resolution is a critical requirement for this analysis.

Figure 3 shows an XRF phase image acquired from a four-layered paint cross section.2 The phase analysis colours areas of the image according to overall elemental content, rather than based purely on a single element. For example, it can be seen that whilst the blue and red regions have almost identical intensity for lead, they show significant differences in sulphur, titanium, iron and zinc content, and thus can be identified as separate layers.

The applications discussed in this article are typical of the many varied micro-XRF analyses made in typical forensic laboratories around the world. The advantages of the technique are numerous. Compared with traditional bulk XRF, it is immediately applicable to the many microscopic particles and fragments of evidence which are often presented to the forensic scientist. Compared with SEM/EDX, the technique can offer orders of magnitude increases in sensitivity, and can cope with real life samples in the centimetre and metre size regime in addition to microscopic particles. Overall, its fast, non-destructive analysis capabilities for an almost infinite range of samples means that micro-XRF will always cope with the often unusual samples that land on the forensic scientist’s desk.