An estuary is an ecosystem that is characterised by both marine (e.g. tides or erosion through waves) and riverine processes (e.g. freshwater and sediment inputs). At the interface between fresh- and sea-water domains, estuarine waters are often referred to as brackish waters with salinities between 1 and up to 35 (corresponding to total dissolved solids between 0.1 % and ≤ 3.5 %). Coastal zones including estuaries are historically populated by humans, hosting major cities and industrial activities. Estuaries are the focal points of aquatic contaminant transport from the continent to the sea, facing contamination from industrial, agricultural and urban sources, especially over the past decades. Important examples of estuaries are Puget Sound in the north-western US, Rio de la Plata in South America and the Thames Estuary in the UK. In this study, the focus is on the Gironde Estuary in south-west France, a major fluvial-estuarine system. The main objective of this study is to track and control historical and ongoing multi-metal contamination of the Gironde Estuary waters. Clear evidence for contamination (mainly Cd) has been observed in seafood (oysters) from the estuary mouth and the nearby Marennes-Oléron Bay, Europe’s major oyster production area.1

Estuarine water samples were collected in the high salinity range of the Gironde Estuary, i.e. relatively close to the estuary mouth, ~100 km downstream from Bordeaux, France. Sampling was performed onboard the research vessel Thalia (Ifremer) over a cycle of 30 hours, implying that the water masses sampled have variable salinity due to the strong ebb–flood cycle in this meso-/macrotidal estuary. Salinities in the samples ranged from 30.2 to 31.8. To avoid potential matrix effects caused by different salinity, all samples were adjusted to a salinity of 30. The star in Figure 1 shows the sampling site in the Gironde Estuary mouth, which is part of a larger sampling campaign along the entire estuarine salinity gradient (data not shown). 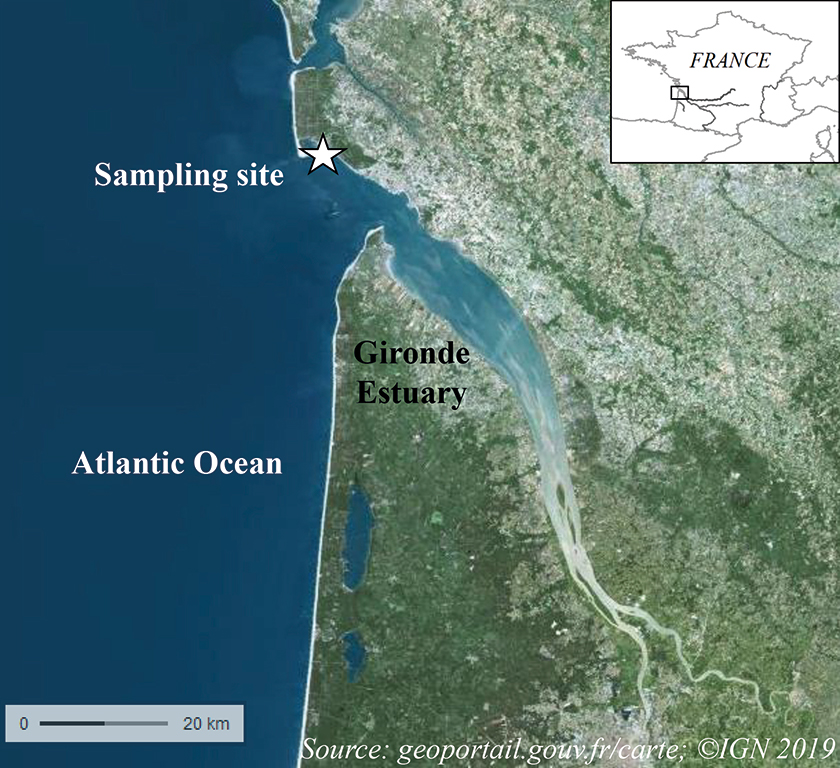 However, the analysis of samples containing high salt loads imposes special challenges when using inductively coupled plasma-mass spectrometry (ICP-MS). Salts may crystallise during the process of nebulisation or deposit on surfaces of the interface region, leading to blockage of nebulisers and cone orifices. This may lead to severe reduction of signals and cause drift problems. With respect to spectral interferences, most commonly chlorine-based polyatomics such as those interfering on vanadium, chromium and arsenic, need to be removed.

Additionally, strong interferences can be observed on copper, based on the presence of sodium and magnesium in estuarine and sea waters.

In order to overcome the impact of the sample matrix, samples can be diluted using clean diluents, but especially for the analysis of elements at trace or ultra-trace levels, dilution always induces the risk of contamination or over-dilution, leading to final concentrations in the measured solution being lower than instrumental detection limits (IDLs). Another appealing alternative is the use of argon gas to dilute the sample before it enters the plasma. Although this also leads to a significant reduction in achievable instrument sensitivity, method detection limits (taking into account all steps in sample preparation) can be less compromised as compared to liquid dilution.

Due to the extremely low concentrations in seawater commonly observed for some of the analytes (especially Pb, but also Cd), careful control over potential sources of contamination and clean laboratory conditions are key to successful analysis. The labware was acid-cleaned (soaking for three days in 10 % HNO3 Normapure®, VWR-BDH Chemicals), thoroughly rinsed with MilliQ® water (Merck), dried under a laminar flow hood in a clean lab (over-pressurised, filtered, air-conditioned atmosphere), then sealed in double plastic bags until use. All samples were filtered onboard immediately after sampling using 0.2 µm membrane filters (MINISART® NML, Sartorius), acidified (1 / 1000, HNO3 Suprapur®, Merck), and stored in the dark at 4 ˚C pending analysis.

Tuning of the system was accomplished using the autotune routines provided with the Thermo Scientific™ Qtegra™ Intelligent Scientific Data Solution™ Software. Typical operating conditions are summarised in Table 1. The selection of analytes, appropriate analysis mode (single quad vs triple quad, choice of reactive gas) was accomplished using the Reaction Finder method development assistant. For the selected elements, this resulted in only arsenic being acquired in a triple-quadrupole mode using oxygen as the reactive gas, whereas for all other analytes, the use of helium and KED was recommended. The mass selection in the first quadrupole was controlled using intelligent Mass Selection (iMS) in all cases.

For calibration and quality control, a certified reference material was used (CASS-6, Nearshore Seawater Certified Reference Material for Trace Metals and other Constituents, National Research Council Canada). Matrix-matched calibration curves were generated by the addition of increasing concentrations of the elements investigated in this study directly into aliquots of the CASS-6 certified reference material (CRM). Table 2 gives an overview on the added concentrations for the different analytes. As the calibration was matrix matched, no internal standard was used in the analysis. Again, all solutions were adjusted to a salinity of 30.

Following eight to nine unknown samples, CASS-6 was repeatedly analysed by standard addition in order to (i) check the accuracy of the method and (ii) monitor potential sensitivity drift.

The results obtained are summarised in Table 3. As can be seen, quantitative recoveries are obtained for all elements under study in the CASS-6 CRM. The CRM was analysed four times throughout the analysis and demonstrated low relative standard deviations despite the extremely low concentrations of some of the elements. For arsenic (the only element measured in both single- and triple-quadrupole modes), there is no significant difference in the results considering the uncertainty information in the certificate of the CASS-6 CRM. In this sample matrix, the predominant interference on 75As are chlorine- and calcium-based species, such as 40Ar35Cl+, 40Ca35Cl+ or 40Ca(OH)2H+. Due to their polyatomic nature, these interferences can be efficiently removed by KED alone. However, it is worth noticing that the triple-quadrupole-based mode using oxygen offered a much higher detection sensitivity (more than double in comparison to KED) and significantly lower detection limits (more than five times lower). Other interferences, such as doubly charged ions of the Rare Earth Elements, might affect the results for elements such as arsenic or selenium, and can only be removed using triple-quadrupole technology. However, in this study they were not found to be causing any bias to the results.

Table 3. Results obtained for the measurement of CASS-6 CRM and 18 samples.

The results of this study were compared to an earlier study using a different analytical technique, i.e. a submersible voltammetry system validated for measuring estuarine samples.2 The comparison shows that results are very similar for arsenic, cadmium and lead. Results for copper and zinc deviated slightly from earlier results probably due to their higher affinity for forming complexes with organic molecules present in sea water, which are not detected by in situ voltammetry.

The direct analysis of estuarine waters without prior dilution is possible using AGD on the iCAP TQ inductively coupled plasma mass spectrometer. The results obtained for the CASS-6 CRM indicate accurate and precise quantification is possible at very low concentration levels. The results obtained for the samples collected in the high salinity range of the Gironde Estuary show that historical metal contamination in the estuarine waters persists, although at lower levels (especially for elements such as Cd or Zn) as compared to earlier studies conducted in the 1990s.3 This observation fits with the continuous decrease of Cd concentrations determined in wild oysters from the Gironde Estuary mouth.4 Comparing the data to the results of an earlier study, it is clear that both ICP-MS and voltammetry methods provide similar results at trace and ultra-trace levels. Slight differences in results may occur due to metal species/complexes not detected in voltammetry. If submersible voltammetry systems allow for in situ measurements of a number of trace metals, ICP-MS is a time-efficient alternative and allows the analysis of a wider range of elements in one aspiration of the sample due to its inherent multi-elemental capability. Future work on multi-element analysis in seawater should include an even wider range of elements, including emerging metal contaminants. 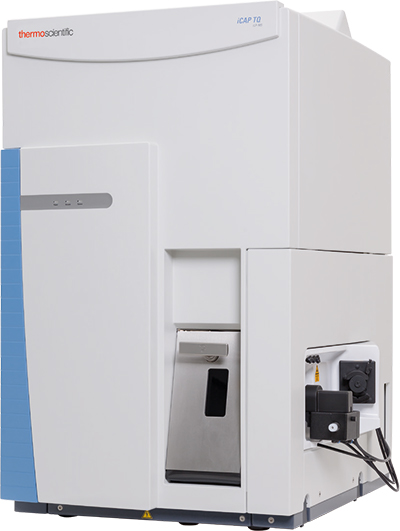 Find out more at thermofisher.com/TQ-ICP-MS

The authors greatly acknowledge the use of the R/V Thalia (Ifremer) of the French National Coastal Research Fleet. Sampling and sample treatment were funded within the SCHeMA project (Integrated In Situ Chemical Mapping Probes; EU FP7 Ocean 2013.2; Project-Grant Agreement 614002).