Analysis of used lubrication oil for metals is commonplace in many industries. The metals analysed fall into three categories: wear metals, contaminants and additive elements. Inductively Coupled Plasma Optical Emission Spectroscopy analysis is a very useful tool for this application.

Analysis of used lubrication oil for metals is commonplace in many industries. The metals analysed fall into three categories: wear metals, contaminants and additive elements. The concentration of these metals and elements can then be interpreted to schedule maintenance of engines and machinery such as construction machinery and aeroplanes. The cost of unscheduled maintenance can be high, not only in materials and parts, but also in lost profits due to down time. Once the oil has been sampled, Inductively Coupled Plasma Optical Emission Spectroscopy (ICP-OES) analysis is a very useful tool for this application. The high temperature source allows for full dissociation of organo-metallic compounds and also has the ability to handle the complex organic matrix. This allows for the oil to be directly aspirated into the ICP after a simple dilution, negating the need for any time consuming sample preparation technique and enabling a fast turnaround time.

An emerging area for this type of analysis is in the motor sport industry, particularly for endurance races such as the Le Mans 24 Hour and the 24 Hour Motorcycle Endurance Championship. The results of samples taken during a pit stop can be used to predict which components of the engine will need to be replaced and when. This allows the competitive teams to reduce the number of stops and therefore spend more time on the track improving the racing time; it also has the added benefit of predicting the premature failure of engine components.

A method that is commonly used by many commercial and contract laboratories is ASTM D5185,1 which is suitable for the analysis of additive elements, wear metals and contaminants in used lubricating oils and selected elements in re-refined and virgin base oils. A total of 22 elements can be determined by this method and it is generally used as a rapid screening method to monitor the equipment condition and define when corrective action is needed. However, the metallic analytes must be oil soluble for accurate quantification. The quantification of insoluble particles such as small particles of metal dislodged from a mechanical part (greater than a few micrometres in size) is not possible when using this methodology and an additional digestion step would be required to enable quantitative analytical measurements.

The main factor that influences the use of ICP as an analytical tool during a motor sport event is the availability of an instrument at the racetrack location. Recent advances in ICP instrumentation such as significant reduction in size, and enhanced stability and robustness have meant that mobile laboratories equipped with ICPs are now able to support such events and offer the powerful capability for analysis of lubrication oils for predicative maintenance, see, for example, Figure 1.

A sample of lubrication oil is taken when the engine is running and the oil has reached normal operation temperature. This is undertaken to ensure that the oil is homogenous and the viscosity is reduced, allowing ease of sampling). An aliquot of a homogenised sample is diluted by weight with a suitable solvent (mixed xylenes or kerosene). Standards are prepared in the same manner. The concentrations of metals within a sample are then determined by direct analysis by ICP spectroscopy. The data is then interpreted to schedule maintenance.

An iCAP 6300 Radial ICP emission spectrometer (Thermo Scientific) was selected for this analytical application. The spectrometer employs a high resolution Echelle spectrometer with a charge injection device (CID) detector. The radial view plasma was selected because of its high matrix tolerance and reduced matrix interferences. The small footprint and the weight characteristics of the iCAP 6000 series spectrometer also make this instrumentation highly suitable for use in the mobile laboratory environment.

Prior to the stock standards being diluted, the stock solution was homogenised by placing the standard into an ultrasonic bath that was heated to 60 °C. The yttrium (Y) oil-based standard was diluted (by weight) in mixed xylenes to give a final concentration of 10 mg kg–1 Y. This solution was used for all dilutions of standards. Yttrium was used as an internal standard for all elements with the exception of sulphur, as the Y oil-based standard also contained sulphur. Once the standards had been diluted, base oil was added to the solutions to ensure the final solutions contained 10 % oil. A blank was prepared by diluting the base oil in the dilution solvent ten fold. Separate standards were prepared from blank xylene as both the yttrium and the S21 standards contained sulphur.

A check standard was prepared from a second source (NIST 1084a) in the same manner as the standards. All samples were diluted ten-fold by weight with the diluent solution.

Samples were homogenised in a heated ultrasonic bath in the same manner as the stock standard solutions. The samples were then diluted by a factor of ten on a weight basis with xylene containing the 10 mg kg–1 yttrium internal standard.

Table 2. Results of the analysis.

The ICP peristaltic pump was fitted with Viton® pump tubing to introduce the sample and remove waste from the spray chamber. A v-groove nebuliser was used in conjunction with a baffled spray chamber. This combination was used as it reduces the overall amount of solvent reaching the plasma and is efficient at removing large particulates from the sample aerosol, which would result in a low recovery. The plasma was ignited, appropriate parameters set (Table 1) and xylene was aspirated for a period of 20 min prior to analysis. The ASTM D5185 method calls for wavelength profiling to be carried out prior to analysis. However, this setup step can be avoided in practise when using the iCAP 6000 series instrumentation due to its enhanced stability and intelligent auto optimisation design features.

Wavelengths were selected that were most likely to be free from interferences in this matrix, taking into account the elements being analysed as well as the emissions that are likely to arise from the matrix, such as molecular carbon emissions in the viable region. Once each of the samples and standards were run, the sub-array plots were examined and any changes were made to correct for interferences. From the results obtained it was found that no mathematical correction factors were required (based on the recoveries of the second source standard).

The instrument was calibrated and then two second source standards were run (NIST SRM 1084a Wear metals in Oil, 100 mg kg–1 and SRM 1085b Wear metals in Oil, 300 mg kg–1). The values of these are required to be within 5 % of the certified values for analysis to continue. The samples of used lubrication oil were then run and the second source (NIST 1085b) was then run again to confirm the analytical result and confirm the absence of instrument drift.

Over the total analysis, nine check standards were analysed and all data was confirmed to meet the requirements of the method. The mean values of the check standards, along with high/low results, can be seen in Figure 2. An example quality control (QC) chart for P (Figure 3, blue plot) shows the variation of the results over time and the 10 % limits set by the method. 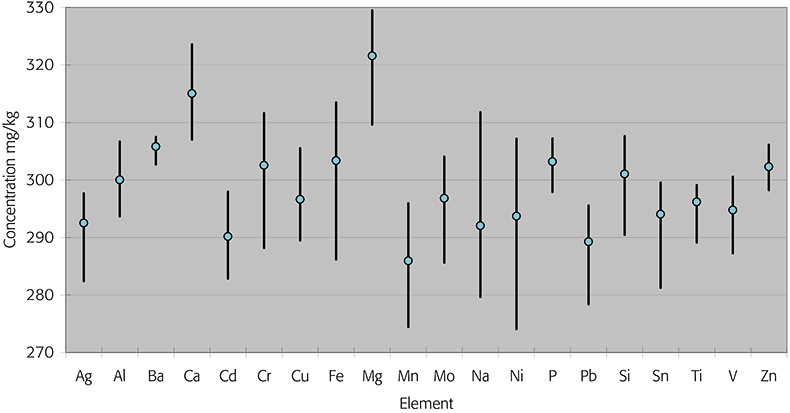 Figure 2. The mean and variation of the nine check standards (NIST 1085b). 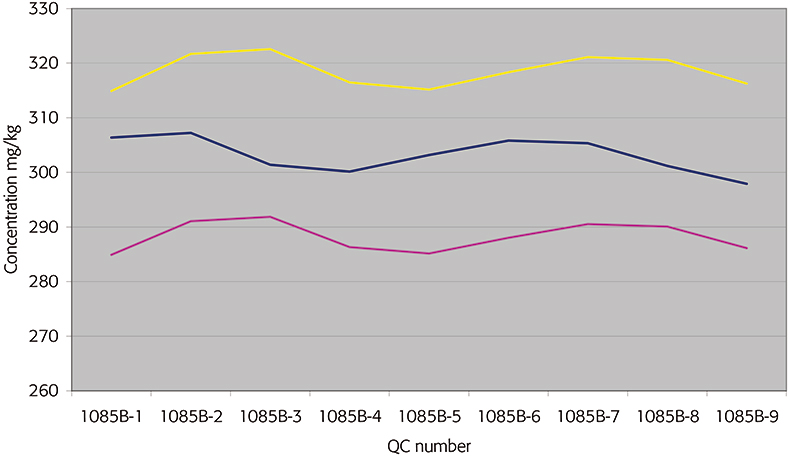 The results of the sample analysis can be seen in Table 2. Figure 4 shows that as the oil is used in an engine, the elemental composition changes. In this case, the concentration of iron has increased, which indicates possible wear of a number of components such as piston rings, ball/roller bearings or gears, this will allow members of the racing team to change these components at a pit stop thereby preventing them failing on the track. The concentration of magnesium has also decreased, which shows that the additive components are being consumed and oil additive can be then added at the appropriate concentration. However, the silicon concentration has remained constant throughout that would indicate that the oil filter is still intact. 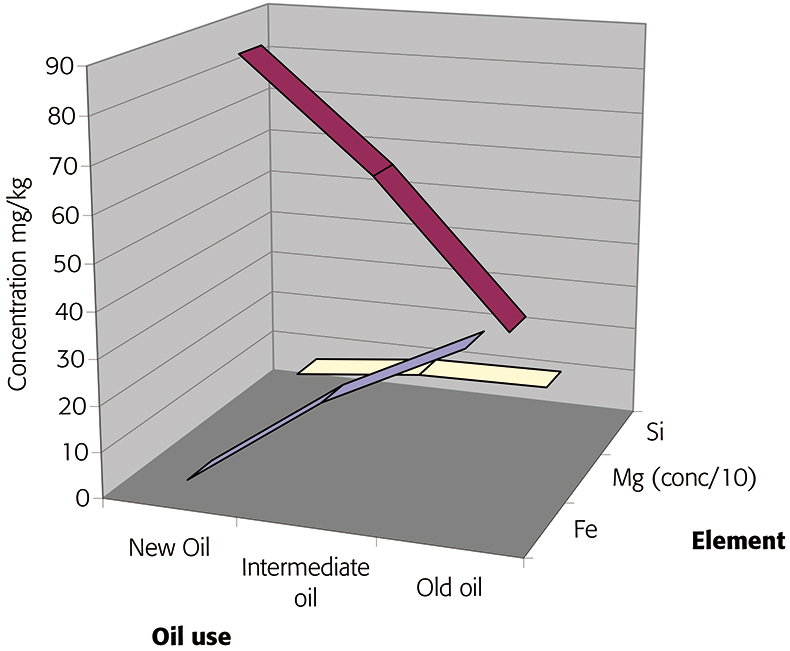 Figure 4. The elemental composition of the oil tested vs time.

ICP spectrometric analysis is shown to be very capable of meeting the demanding requirements for the analysis of used lubrication oils for predictive maintenance applications. The high matrix tolerance of the dedicated radial system is shown to be ideal for analysing challenging oil sample matrices. The size, robustness, speed and sensitivity of the ICP instrumentation used ensure its ability to achieve accurate and high speed analyses in the mobile laboratory environment.

Characterisation of TiO2 pigments in commercial foundation creams: a synergic use of the ICP-AES, square wave voltammetry and sedimentation FFF techniques
1 August 2011
The ICP-ToF mass spectrometer: an alternative for elemental analysis
1 February 2005