Adobe PDF use in analytical information storage and archiving

There are more things in Heaven and Earth Horatio,
Than are dreamt of in your philosophy.1

Yes, the children are now studying Hamlet at school and this seemed an appropriate quote to start of this edition.

When we set up ALIS GmbH one of the first major “discoveries” was probably the most embarrassing for me. Having worked on analytical data standards for so long, I seem to have successfully generated a blind spot for the developments which have taken place in the structure, standardisation and functionality of the Portable Document Format (PDF).2 Maybe it’s due to a subconscious aversion to what I had for a long time seen as a simplistic “get out” solution for those too lazy to convert data into a long-term, stable, vendor-neutral format. How often have we heard the “well... we just print to PDF” as an excuse for not having in place a properly thought through analytical data storage and archiving policy taking no account of the future use to which that data may well be put within an organisation.

Anyway, it has been pretty difficult for me to admit that my knowledge of the available functionality lay somewhere back in the early 1990s (see Figure 1) but I hope in this column to make some amends! 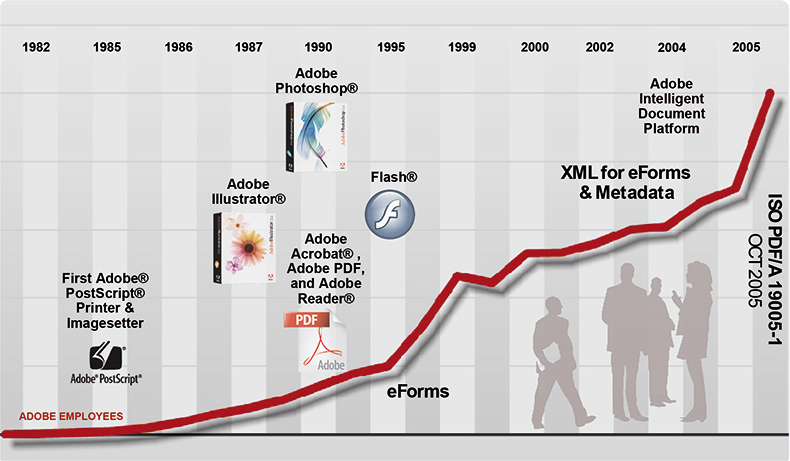 We will look at the PDF file format and standardisation by international standards bodies. On the functional side we will look at:

The “PDF format” is actually a series of formats which have built on each other with increasing (and sometimes specifically limiting) functionality (see text box).

The PDF format was originally intended to provide a platform and generating software for independent documentation representation. So whatever computer operating system is your personal favourite from Apple Macs, Microsoft Windows or UNIX-based etc., you can receive, view and print documents from colleagues who prefer to work in one of the other environments without worrying whether the document you are viewing is actually showing the same image as the original author intended.

Although the PDF format is proprietary, it is also open and well documented allowing other software vendors to work with PDF formatted documents without resort to licensing the format from Adobe.

A number of versions of the PDF format have been and continue to be adopted as ISO standards (see text box). Adobe published the first PDF standard in 1993 and since then the standard has been enhanced with additional functionality with almost every major release of the Adobe Acrobat software. The organisation coordinating these ISO efforts is called AIIM and was originally founded in 1943 as the National Microfilm Association. It later became the Association for Information and Image Management (AIIM) before mutating in a similar manner to ASTM by dropping its original title in favour of the initials and is now known as “AIIM–The Enterprise Content Management Association”.4 AIIM is accredited by ANSI (American National Standards Institute) as a standards development organisation and holds the Secretariat for the ISO (International Organization for Standardization) committee focused on Information Management Compliance issues, TC171.5

OK, so PDF is now an internationally recognised documentation standard, but how can that help us in the analytical field? Well let’s look at the internal workings of the PDF file.

What surprised me most when learning about how far PDF formats had come while I wasn’t watching, was to learn about the intelligence underlying the visible document which we are used to seeing. I could write for several hundred pages on the structure of the PDF document but as a picture paints a thousand words you will be spared! Figure 2 shows a schematic representation of how a modern PDF file is built. 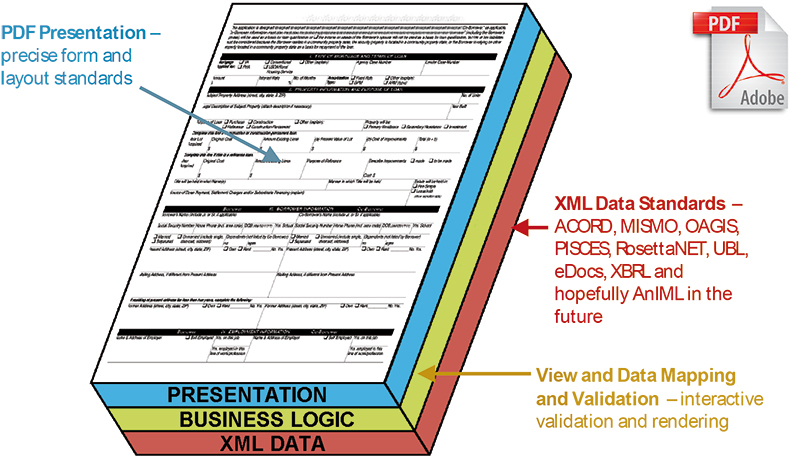 Figure 2. PDF document structure can be explained in a three tier model of a Presentation Layer (what you see and print), Business Logic Layer which contains the intelligence and possible interconnectivity information making the PDF Document into a flexible configurable expandable object and finally the XML layer.3

The presentation layer is essentially what we see either on the computer screen or when printed out. This may be only a fraction of the information actually stored within the PDF file down at the XML level as the display is controlled in part by specific business rules.

In an analytical laboratory this may well mean that a single PDF form contains data entry fields for all the possible information to be captured for all the different types of analyses carried out in the company. A very simple PDF presents itself to the user when a new work order is first opened... say just enough information for the user to identify themselves and their group. This information can be used to control the presentation layer restricting the available fields to those relevant to the actual user. A user registering a sample for analysis in the NMR laboratory would, for example, only see the fields appropriate for the available NMR experiments.

The simplest deployment of the available technology would be the classic eForms solutions where the PDF Reader displays boxes to be filled in without any additional rights enabled. The data to be entered has the advantage of being structured. However, with no inherent capability of saving the file with the data or connectivity to another IT system the only way to store and communicate the information further is to print out a hard copy of the file which would then need re-entering to any receiving system (Figure 3).

Figure 3. A standard eForm in Adobe reader can be filled out but the only way to store the data entered is to print it.

Figure 4. A rights-enabled PDF form can be completed in Adobe reader and also saved to disk with the data entered. This is indicated by a different message to the user within Reader than in Figure 3 showing that a rights-enabled form is being viewed.

The next level up is to design the form so that the boxes can validate the data being entered. This brings benefits in that the data in the printout is correctly structured—where a sample code in your organisation’s specific format should have been entered you can ensure that it has the correct form, eliminating some simple typing errors.

The larger returns on investment come with rights-enabled forms where the form can now be completed, entries validated and maybe digitally signed and then saved. Rights-enabling a form is done centrally and no additional software needs to be deployed to the client PCs where the Adobe Reader is already in place.

Finally, the top level of functionality which can be deployed to make your life easier is where the individual boxes are linked to other IT systems. For example, where information about the client who has requested the analyses is available in another database system, don’t waste time re-entering this data into the form for every sample they submit but connect to your client database and select the client using a drop-down list box which then triggers the automatic population of the other client fields. This can work in both directions—for a new client—enter the details in the respective fields and upload to the database for re-use later on! (See Figure 5.) 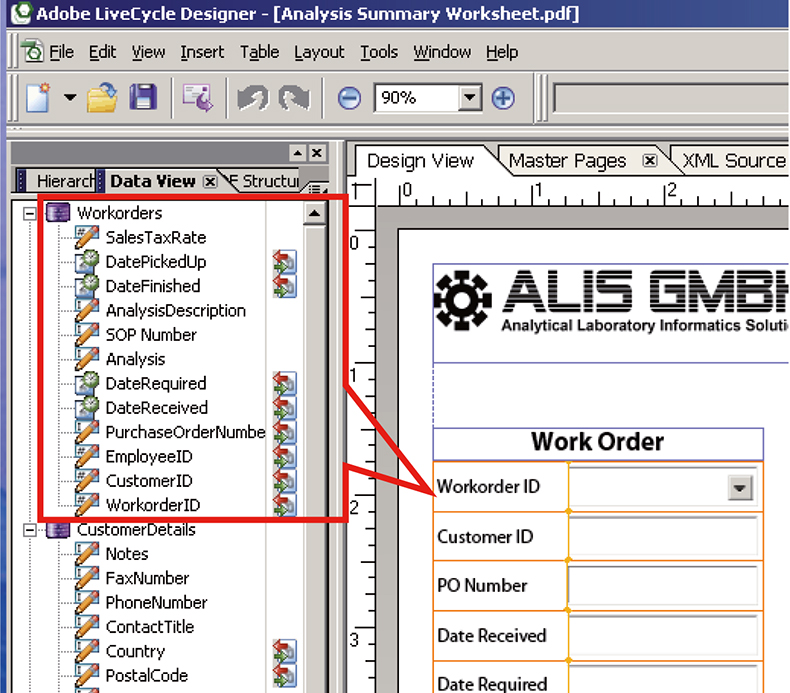 Figure 5. During PDF form development the individual fields can be automatically linked to external IT systems—in this example to an ERP system for administering contract analytical laboratory work.

You can work with the spectroscopic data in the same manner. In the form shown in Figure 6, an area has been reserved for an image to show the exact view the spectroscopist had on the data as the decision was made to pass the sample. 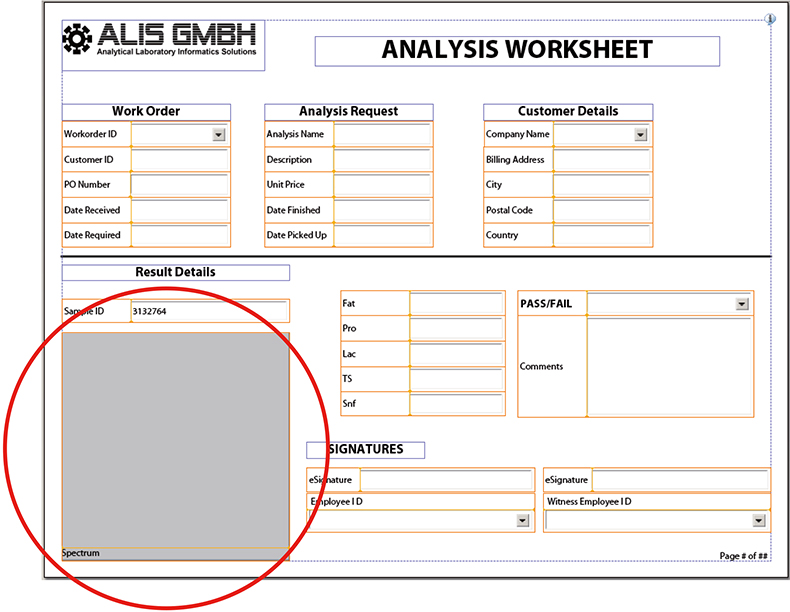 Figure 6. In this reporting form an image field (circled) has been added and can be populated with a graphical snapshot taken from the standard spectroscopy software package. With the eForm rights enabled clicking in this field will open a dialog box where the appropriate spectra image can be uploaded.

The actual measurement data in any format can also saved with the rights-enabled PDF document as an attachment. In our example in Figure 7 the file has been attached as a comment to the uploaded image in IUPAC/JCAMP-DX format to ensure the ability to call up the data for re-analysis at any time in the future. By clicking on the attachment the local client spectroscopy software—in this example the LabCognition Panorama software—is automatically started and the attached file loaded. 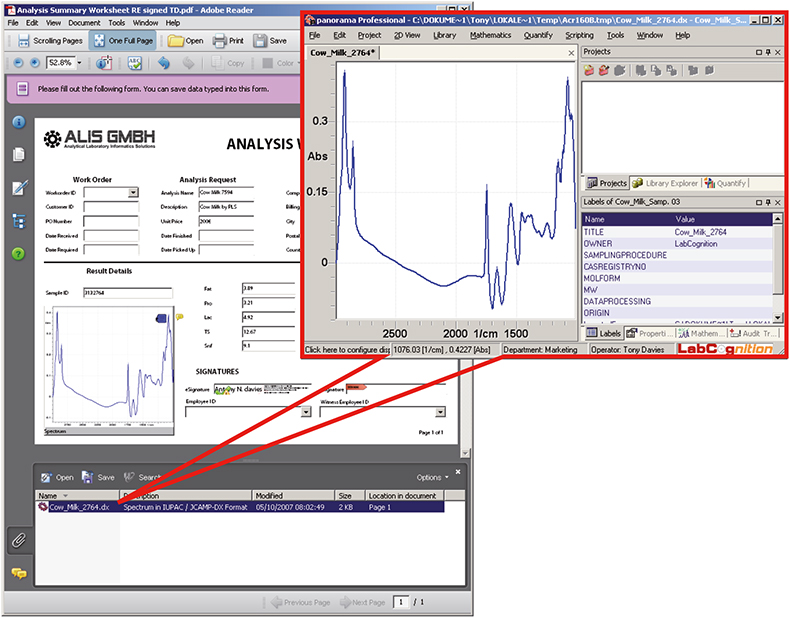 “The better part of valor is discretion,
in the which better part I have saved my life data”.6

Don’t say it isn’t possible to improve on Shakespeare!

...And unfortunately this is only the client-sided half of the story. The Adobe LiveCycle suite of products adds substantially more functionality especially around workflow and document security which is of interest for all regulated areas of analytical work including ensuring your labs are all working to the same SOP for example... but that is a story for another day.

AnIMLs in from the wild: XML standards at LGC
1 June 2010