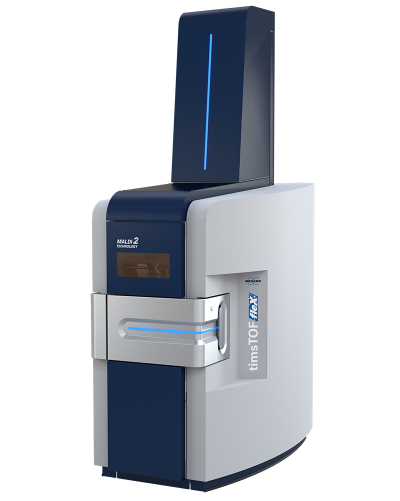 Bruker have launched the MALDI-2 post-ionisation (PI) source, which is now available as an option on the timsTOF fleXTM ESI/MALDI mass spectrometer. MALDI-2 technology can offer one or two orders of magnitude higher sensitivity for many small molecules and lipids. MALDI-2 increases the applications range of MALDI mass spectrometry and imaging even further, as well as both the sensitivity and range of applications of MALDI. MALDI-2 requires a second laser (266 nm) fired orthogonally into the expanding MALDI plume that is generated by Bruker’s proprietary primary SmartBeamTM 3D (355 nm) laser. An optimised flexMatrixTM formulation is recommended for MALDI-2.

Bruker now also offers a MALDI-2 compound reference library for its MetaboScape® metabolomics software, which was created during various academic and pharma collaborations. MetaboScape provides automatic analyte annotation within the SCiLS™ Lab MALDI imaging software, including CCS-algorithms that improve the confidence of annotation for many metabolites, glycans and lipids directly in tissue images.