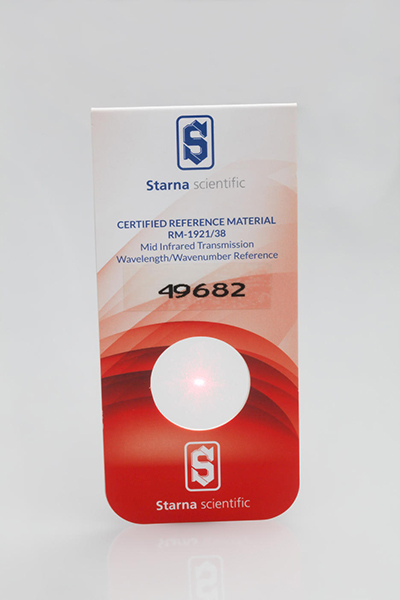 Starna now supply an “ATR” set of polystyrene film references to assist compliance with the new European Pharmacopoeia Chapter 2.2.24. This is supplied as a kit of two films: a RM-1921/38 film certified film for normal transmission measurements and an accompanying film specifically certified for “ATR only”. This new set expands the Starna range of polystyrene film references for use in FT-IR, mid-IR and NIR wavelength calibration to include both transmission and ATR modes. Existing films are available in two thicknesses: RM-1921/38 is a 38 µm polystyrene film with 14 certified peaks from 540 cm–1 to 3080 cm–1 (18.5–3.25 µm) whose values are traceable to NIST SRM 1921b. A thicker version, RM-1921/65, is 65 µm thick and in addition to the 14 peaks in the mid-IR, eight peaks are certified in the NIR from 3060 cm–1 to 8750 cm–1 (3.25–1.15 µm). These peaks are traceable to NIST SRM 2065.

The reference films comply with the latest revisions of the European Pharmacopoeia Chapter 2.2.24, and US Pharmacopoeia General Chapters 854 and 1854 on Mid-Infrared Spectroscopy. They are presented as card-mounted films in the conventional industry pattern; ATR film unmounted. These references are produced under Starna’s ISO 17034 Reference Material Producer accreditation and certified under ISO/IEC 17025 for Calibration.