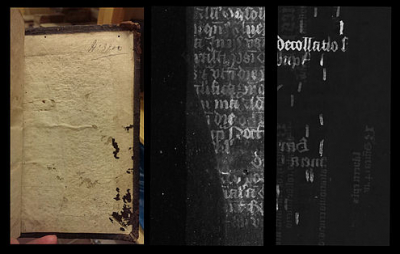 Bookbindings from the fifteenth to the eighteenth century hold hidden treasures. Book binders from this period cut up handwritten books from the Middle Ages because these had become old fashioned after the invention of printing. The dismembered manuscripts were used as binding material. Upon restoration the bindings reveal their innermost secrets—cut up leaves from medieval books. The manuscript fragments are found in perhaps as many as one in five early-modern printed books.

Researchers Erik Kwakkel (Leiden University) and Joris Dik (Delft University of Technology) succeeded in looking through the covers of early-modern printed books in order to reveal the medieval pages inside (“Hidden Library” project). A leaf from a twelfth-century copy of Bede (d. 735) has been found, as well as a Dutch Book of Hours in the translation of Geert Grote, founder of the Devotio Moderna. The researchers were even able to digitally disassemble multiple pages that had been pasted on top of one another, making the text legible.

The MA-XRF technique visualizes a medieval fragment of c. 1400 hidden in a parchment binding (Delft University of Technology)

Professor Dik’s team developed the MA-XRF technique a few years ago in collaboration with industrial, academic and museum partners. Originally, the method was designed to visualise hidden paint layers in old masters’ paintings, but it proved equally efficient in the visualisation of hidden medieval inks. A thin beam of X-rays is used to scan the object, charting the presence and abundance of various elements below the surface. Iron, copper and zinc are the main elements in medieval inks, and can be viewed even when covered by a layer of paper or parchment.

Over a period of three months, the researchers tested various experimental setups. The aim was to make hidden texts not only visible, but above all legible. The medieval fragments presented various analytical challenges in that respect, such as the double-sided writing of parchment and small-scale handwriting, but also the large variety of chemical compositions of inks. Although successful in most cases, some cover material in bindings, such as thick leather, proved to be too opaque for X-ray analysis. The main hurdle at this stage, however, is the tediously slow acquisition speed of the current methodology. Some books were scanned for over 24 hours, preventing a full-scale, practical adoption of the methodology for the moment. New developments in X-ray technology—both in X-ray sources and detection—could very well lead to a much faster, practical application in the foreseeable future.