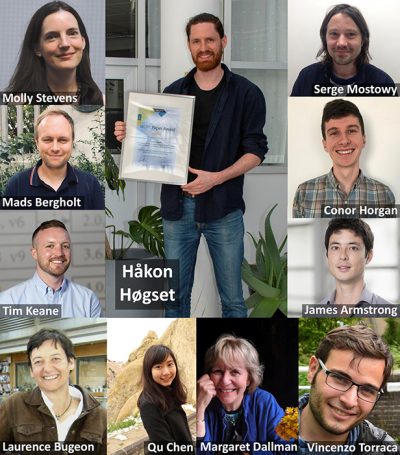 Three scientific publications have been recognised by the WITec Paper Award, an annual competition among peer-reviewed articles from the previous year that feature results acquired with a WITec microscope. The exceptional quality of the 115 submitted publications made it particularly challenging to select only three winners. The Paper Awards for 2021 go to researchers from the UK, Turkey and the USA who performed Raman imaging measurements on zebrafish embryos, meteorites and jet engine thermal barrier coatings, respectively. WITec congratulates the winners and thanks all the participants.

Zebrafish are well-established model organisms in the life sciences and are frequently used for studying embryonic development and various diseases. Håkon Høgset from Imperial College London (ICL), UK, receives the Gold Paper Award 2021 for demonstrating the versatility of confocal Raman imaging for the biomolecular characterisation of zebrafish embryos. Together with his co-workers from ICL and the London School of Hygiene & Tropical Medicine, he established that the distribution of various biomolecules such as lipids and proteins can be visualised in an embryo on different length scales. First, 3D Raman images of entire, several-millimetre-long zebrafish embryos demonstrated Raman imaging of an entire organism. Second, high-resolution Raman imaging revealed microscale features of tissue sections from dorsal muscle, tail and gut. Raman imaging was next used to detect clusters of mycobacterial infection in a zebrafish model for tuberculosis. Based on metabolic differences, Raman spectroscopy could even distinguish between infections arising from different strains. Lastly, time-lapse Raman imaging monitored molecular changes during wound response in living embryos over several hours. The authors expect that “the ability to perform volumetric and in vivo imaging in unlabelled embryos should provide a host of new opportunities for zebrafish research that can readily complement existing fluorescence imaging techniques”. doi.org/10.1038/s41467-020-19827-1

From the chemical composition of meteorites, planetary scientists can learn a great deal about their parent bodies’ history. “Studying meteorites and their parent bodies helps us understand how our solar system formed and evolved”, says Mehmet Yesiltas from Kirklareli University, Turkey, winner of the Silver Paper Award 2021. His publication presents a detailed chemical analysis of the Didim meteorite, which he investigated together with his colleagues from research institutions in Turkey, the USA, France and Germany. The Didim meteorite (named after Didim, Turkey, where it fell in 2007) is a chondrite with a relatively rare and varied mineralogical composition, making it especially interesting. The authors investigated its chemical composition on different scales using three spectroscopic methods. Biconical reflectance spectroscopy was used for an initial large-scale assessment and revealed mainly anhydrous silicates. Raman imaging then allowed for a more precise characterisation of the rock’s minerals, including feldspars, olivine and pyroxene, and their distributions on the µm scale. Also, aromatic hydrocarbons of different thermal metamorphic grades were shown to exist in close proximity within the meteorite. Non-destructive 3D Raman imaging showed that the carbonaceous matter was present beneath an olivine grain inside the meteorite, suggesting its extra-terrestrial origin. Furthermore, nano-FTIR spectroscopy indicated that the mineralogical composition of the rock varied even on the sub-µm scale. doi.org/10.1111/maps.13585 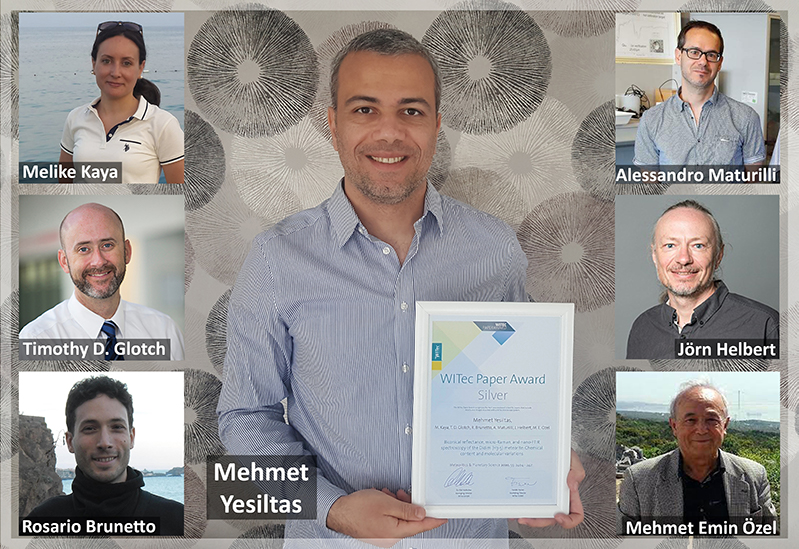 Jet engines are protected against their extremely high operating temperatures by thermal barrier coatings (TBCs). Ingression of molten calcium, magnesium and alumino-silicates (CMAS) into a TBC during flight causes severe damage to it and shortens the engine’s life. Chance Barrett from the University of Central Florida (UCF), USA, wins the Bronze Paper Award 2021 for presenting 3D Raman imaging as a non-destructive method for analysing the CMAS-induced degradation of TBCs, together with his co-workers from UCF and the German Aerospace Center. CMAS ingression causes a transition of the TBC to the monoclinic phase. The volume fraction of this phase, therefore, represents a measure of the degree of degradation and it can be quantified with Raman imaging. 3D Raman maps of TBCs visualised the degradation as a function of depth. The damage was less pronounced in the core of the columns that form the TBC than at their edges, because the gaps between the columns were more accessible. Additionally, time-dependent measurements showed that most of the damage occurred during the first hour of CMAS infiltration. The results were validated by scanning electron microscopy and energy-dispersive X-ray spectroscopy. To the authors’ knowledge, their study is the first to present a non-destructive 3D characterisation of TBC degradation at high resolution. They postulate that “this ability to quantitatively and non-destructively characterise degradation of CMAS infiltrated TBCs will accelerate development of degradation resistant coatings”. doi.org/10.1016/j.jeurceramsoc.2020.09.050 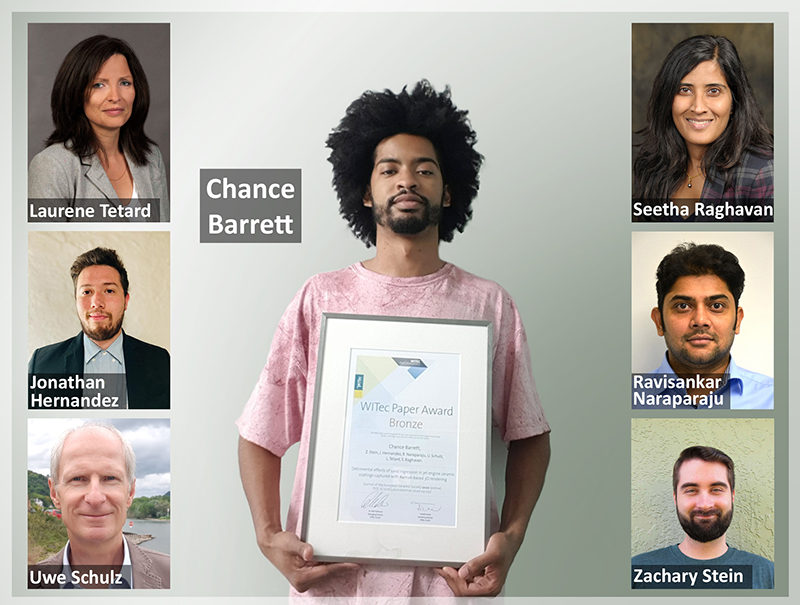 Bronze winner Chance Barrett and his colleagues from the University of Central Florida (USA) and the German Aerospace Center (Germany).

A list of all previous Paper Award winners can be found at www.witec.de/paper-award.

WITec invites scientists from all fields of application to participate in the 2022 Paper Award competition (www.witec.de/paper-award). Articles are eligible if they were published in 2021 in a peer-reviewed journal and feature results (at least partially) obtained with a WITec instrument. Submit your work as a PDF to [email protected] before 31 January 2022.