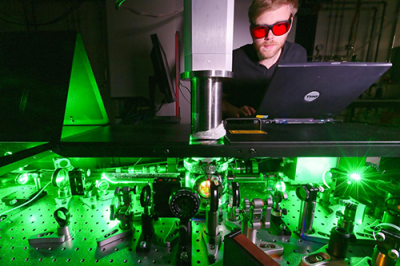 Electrons spin around atoms, but also spin around themselves, and can cross over from one spin state to another. A property which can be exploited for next-generation hard drives. However, “spin cross-over” has been considered too slow to be efficient. Using ultrafast spectroscopy, Ecole Polytechnique Fédérale de Lausanne (EPFL) scientists have shown for the first time that electrons can cross spins at least 100,000 times faster than previously thought. Aside from its implications for fundamental physics, the finding can also propel the field of spintronics forward. The study is published in Nature Chemistry.

Electron spin can be loosely compared to the rotation of a planet or a spinning top around its axis. Electrons can spin in different “spin states” and designated by the numbers 0, 1/2, 1, 3/2, 2 etc. During chemical reactions, electrons can cross from one spin state to another, e.g. from 0 to 1 or 1/2 to 3/2. Spin cross-over is already used in many technologies, e.g. optical light-emitting devices (OLED), energy conversion systems and cancer phototherapy. Most prominently, spin cross-over is the basis of the fledgling field of spintronics. The problem is that spin cross-over has been thought to be too slow to be efficient enough in circuits.

The lab of Majed Chergui at EPFL has now demonstrated that spin cross-over is considerably faster than previously thought. Using the highest time-resolution technology in the world, the lab was able to “see” electrons crossing through four spin states within 50 fs.

“Time resolution has always been a limitation,” says Chergui. “Over the years, labs have used techniques that could only measure spin changes to a billionth to a millionth of a second. So they thought that spin cross-over happened in this timeframe.”

Chergui’s lab focused on materials that show much promise in spintronics applications. In these materials, electrons jump through four spin-states: from 0 to 1 to 2. In 2009, Chergui’s lab pushed the boundaries of time resolution to show that this 0–2 “jump” can happen within 150 fs—suggesting that it was a direct event. Despite this, the community still maintained that such spin cross-overs go through intermediate steps.

But Chergui had his doubts. Working with his postdoc Gerald Auböck, they used the lab’s expertise in ultrafast spectroscopy to improve the time resolution. Briefly, a laser shines on the material sample under investigation, causing its electrons to move. Another laser measures their spin changes over time in the ultraviolet light range.

The finding essentially demolishes the notion of intermediate steps between spin jumps, as it does not allow enough time for them: only 50 fs to go from the “0” to the “2” spin state. This is the first study to ever push time resolution to this limit in the ultraviolet domain. “This probably means that it’s even faster,” says Chergui. “But, more importantly, that it is a direct process.”

With profound implications for both technology and fundamental physics and chemistry, the study is an observation without an explanation. Chergui believes that the key is electrons shuttling back-and-forth between the iron atom at the centre of the material’s molecules and its surrounding elements. “When the laser light shines on the atom, it changes the electron’s spin angle, affecting the entire spin dynamics in the molecule.”

It is now up to theoreticians to develop a new model for ultrafast spin changes. On the experimental side of things, Chergui’s lab is now focusing on actually observing electrons shuttling inside the molecules. This will require even more sophisticated approaches, such as core-level spectroscopy. Nonetheless, the study challenges ideas about spin cross-over, and might offer long-awaited solutions to the limitations of spintronics.

This work was supported by the Swiss National Science Foundation via the National Centre of Competence in Research Molecular Ultrafast Science and Technology, and by a Research Equipment grant.