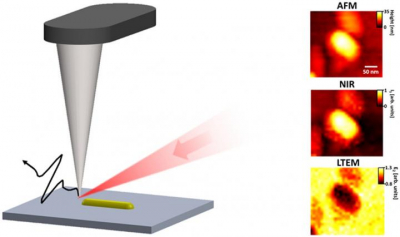 Laser terahertz emission microscopy (LTEM) is a developing means of characterising the performance of solar cells, integrated circuits and other systems and materials. Laser pulses illuminating a sample material cause the emission of terahertz radiation, which carries important information about the sample’s electrical properties. Typically, LTEM measurements are performed with resolution of a few tens of µm, but this new technique enables measurements down to a resolution of 20 nm.

The researchers believe their new technique could be broadly useful in characterising the electrical properties of materials in unprecedented detail.

“Terahertz emission has been used to study lots of different materials—semiconductors, superconductors, wide-band-gap insulators, integrated circuits and others”, Daniel Mittleman said. “Being able to do this down to the level of individual nanostructures is a big deal.”

One example of a research area that could benefit from the technique, Mittleman says, is the characterisation of perovskite solar cells.

“One of the issues with perovskites is that they're made of multi-crystalline grains, and the grain boundaries are what limits the transport of charge across a cell”, Mittleman said. “With the resolution we can achieve, we can map out each grain to see if different arrangements or orientations have an influence on charge mobility, which could help in optimising the cells.”