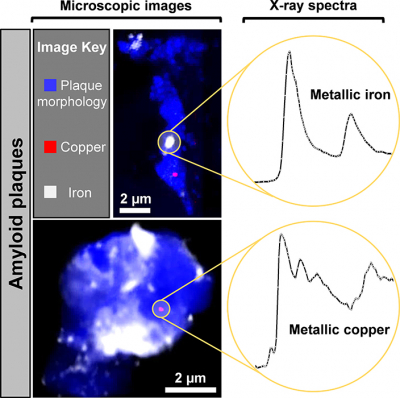 An international team of researchers has discovered elemental metallic copper and iron in the human brain for the first time. The team, comprised of scientists from Keele University and the University of Warwick in collaboration with the University of Texas at San Antonio (UTSA), used Diamond Light Source and the Advanced Light Source located in California to identify elemental metallic copper and magnetic elemental iron within the amyloid plaques, chemical forms of copper and iron previously undocumented in human biology.

The study looked at amyloid plaques isolated from the brain tissue of deceased Alzheimer’s patients. Amyloid plaques, a hallmark feature of Alzheimer’s disease (AD), act as a site of disrupted metal chemistry in the Alzheimer’s brain, and are believed by many to be integral to disease progression.

Neil Telling, Professor of Biomedical Nanophysics at Keele University, said: “The discovery of these elemental metallic particles in the brain tissue we studied, was very much unexpected, and made possible only by using specialist X-ray techniques at Diamond that can detect chemical variations at length scales much smaller than a human cell. There is no reason to think that everyday exposure to these metals could cause their presence in the brain, and in fact it is not yet clear whether such particles are indeed linked to disease. They may be present in normal brains. However, their very presence underlines the importance of the future work now needed to learn about the way in which metals are processed in the brain.”

The research identified nanoscale deposits of the metals in post-mortem brain tissue donated by AD patients, using synchrotron X-ray spectromicroscopy. The surfaces of metallic copper and iron are usually highly unstable and readily react with oxygen from their surroundings to form oxides and other compounds. Chemical compounds of copper and iron and about eight other metals occur naturally in the body and are vital for brain well-being. However, when faults develop in the body’s biochemistry, these metals can also cause damage to the brain. Metal imbalances may be linked to the development of numerous dementia-causing neurodegenerative diseases including AD and Parkinson’s, which afflict millions of individuals worldwide. 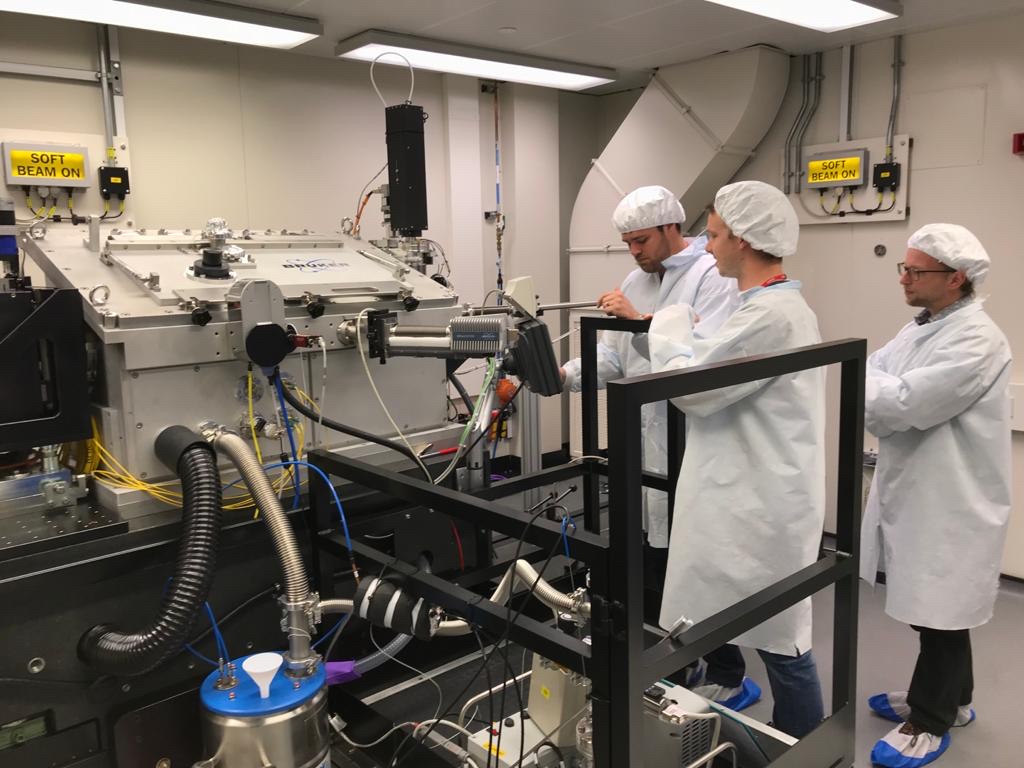 The identification of previously undocumented metallic copper and iron deposits within human brain tissue, indicates that metallic elements, previously observed only in microorganisms, viruses and plants, can also occur in humans. These metallic forms of iron and copper have distinctly different chemical and magnetic properties from their oxide forms, in which they are predominately stored in tissues. The role of the expected highly reactive surfaces of nanodeposits of copper and iron in natural or pathological processes remains to be seen. Their discovery, therefore, potentially offers new insights into the roles played by metals in normal neurochemistry and neurobiology, as well as in neurodegenerative diseases.

Dr Burkhard Kaulich, Principal Beamline Scientist on the I08 Beamline at Diamond Light Source, comments: “This impressive scientific project on fundamental synchrotron and lab-based medical research will hopefully contribute to improve human life conditions by shedding light on the chemical environment within the brains of those with neurodegenerative disease. Additionally, the collaboration with the team at Keele and Warwick opened important new paths for the instrumental performance of the Diamond I08 Scanning X-ray Microscopy Beamline.”

These new findings offer a potential step-change in our understanding of how metals contribute to the pattern of brain cell death that underpins neurodegenerative disease. In turn, this could facilitate the development of new therapies designed to restore metal balance in diseased brains, potentially slowing or preventing the progression of these currently incurable diseases.

Professor Collingwood, co-author and project lead at the University of Warwick said: “This is a fascinating and unexpected discovery, enabled by the sensitivity and precision of the synchrotron techniques we have used to study these human-brain-derived samples. The findings raise detailed questions about how these forms of iron and copper can be produced in the human brain. We know that certain living systems can produce elemental forms of metals, so it will be important to discover if these arise from equivalent but previously undiscovered pathways in humans, or if the metallic forms arise as a direct consequence of disease.”

Outstanding questions remain regarding the origins of the metallic brain metals, including whether they are uniquely associated with amyloid plaques or are more widely distributed throughout the brain. The team believe the presented findings will stimulate new and exciting research into the role of metal biochemistry in the human brain, whilst the state-of-the-art techniques used could be adapted to examine a variety of biological systems and problems.