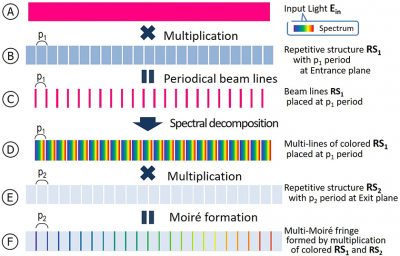 Researchers at Osaka University recently developed a way to increase the resolution of multichannel spectrometers beyond the pixel Nyquist limit using Moiré patterns. A Moiré pattern is an interference pattern created between two similar overlapping patterns with slightly different pitch, displacement, or rotation.

The approach was tested using both a single-wavelength light source and a polychromatic light source consisting of two laser beams of different wavelength. In both cases, the generated Moiré fringe provided resolution beyond the pixel Nyquist limit. Importantly, the developed approach is simple and can be adapted to suit various situations.

Super spectral resolution demonstration, comparing results (a) with and (b) without the proposed method.

This research represents an important step toward the goal of real-time high-resolution monitoring of dynamic events in fields ranging from biology to astronomy. They have published their work in Optics Express.