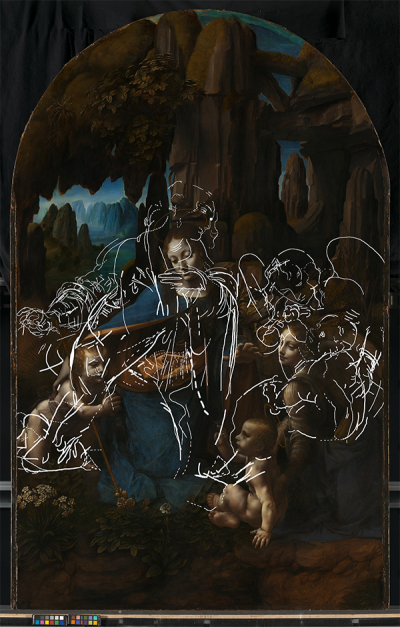 New research by the UK’s National Gallery into Leonardo da Vinci’s The Virgin of the Rocks (about 1491/2–9 and 1506–8) has expanded our knowledge of the composition he began before abandoning it for the version we see today. An earlier discovery in 2004/5 revealed that the Virgin’s pose had been changed, but there were only hints of the other figures that were assumed to have been part of that first effort. Following months of research using macro X-ray fluorescence (XRF) mapping and infrared and hyperspectral imaging, more information has been revealed regarding the first and second compositions underneath the painting. Now for the first time Leonardo’s initial designs for the angel and the Infant Christ can be seen, showing significant differences to how they look in the finished painting.

In the abandoned composition both figures are positioned higher up, while the angel, facing out, is looking down on the Infant Christ with what appears to be a much tighter embrace. These new images were found because the drawings were made in a material that contained some zinc, so it could be seen in the XRF maps.

Why Leonardo abandoned this first composition still remains a mystery. The new research has shown how the second underdrawing, while aligning much more closely to the finished version, nonetheless displays his characteristic elaborations and adjustments from drawing to painting. For instance, the angle of the Infant Christ’s head was changed so that he was seen in profile, while some parts of the angel’s curly hair have been removed. Handprints resulting from patting down the priming on the panel to create an even layer of more or less uniform thickness can also be seen, probably the work of an assistant - but perhaps even by Leonardo himself.