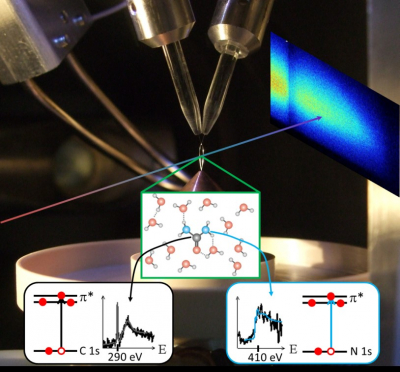 Researchers at the Max-Born-Institut für Nichtlineare Optik und Kurzzeitspektroskopie (MBI) have combined a table-top, laser-based extreme high-order harmonic source for short-pulse soft-X-ray absorption spectroscopy in the water window with novel flatjet technology. They are the first to demonstrate the simultaneous probing of carbon and nitrogen atoms in organic molecules in aqueous solution.

X-ray absorption spectroscopy (XAS) monitors unoccupied electronic orbitals with element specificity, from which the electronic structure can be derived. For the majority of organic molecules, the soft-X-ray spectral region (100–1000 eV) is relevant, as K-edge transitions of low-z elements (C, N and O) and the L-edges of 3d metals are found there. XAS is typically performed at large scale facilities, such as storage rings or free-electron lasers. Table-top laser-based sources have until now only rarely been used to probe pure materials, e.g., metals and organic films. So far, measurements of the carbon or nitrogen K-edges of organic molecules in dilute aqueous solution have not been reported.

The research team at the MBI has now developed a bright source of femtosecond soft X-ray pulses, making use of the extreme high-order harmonic generation process. Long-wavelength (1.8 µm) driver pulses generated with an amplified Ti:sapphire laser system were used to generate high-order harmonics well above the conventional spectral range, i.e., now extending up to 450 eV. They have combined this source with liquid flatjet technology which is fully functional under vacuum conditions. Steady-state absorption spectra of organic molecules and inorganic salts in a thin (~1 µm) sheet of aqueous solution can now be measured, throughout the so-called water window region between 200 eV and 540 eV (see image). In particular, this technique enables the simultaneous local probing at both carbon and nitrogen sites within the molecules. With this the research team has demonstrated the feasibility of following multiple sites within molecular systems, with the potential of probing possible correlations between these sites upon molecular rearrangements.

This investigation, reported in Journal of Physical Chemistry Letters, represents an advance towards the systematic investigation of ultrafast rearrangements of solution-phase molecular systems with femtosecond soft X-ray spectroscopy. New insights into ultrafast charge transport processes and photo-induced reactions in chemistry and biology are hoped to become possible.