Raman images the birth of crystals 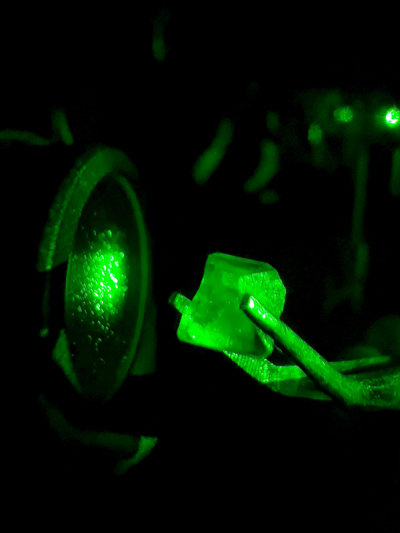 At the interface between chemistry and physics, the process of crystallisation is omnipresent in nature and industry. It is the basis for the formation of snowflakes but also of certain active ingredients used in pharmacology. For the phenomenon to occur for a given substance, it must first go through a stage so-called nucleation, during which the molecules organise themselves and create the optimal conditions for the formation of crystals. While it has been difficult to observe this pre-nucleation dynamics, this key process has now been revealed by the work of a research team from the University of Geneva (UNIGE). The scientists have succeeded in visualising this process spectroscopically in real time and on a micrometre scale, paving the way to the design of safer and more stable active substances.

In the first phase of nucleation, molecules begin to arrange themselves to form a “nucleus”, stable clusters of molecules, which leads to the development and growth of a crystal. This process occurs stochastically, meaning it is not predictable when and where a nucleus form. “Until now, scientists have been struggling to visualise this first stage at the molecular level. The microscopic picture of crystal nucleation has been under intense debate. Recent studies suggest that molecules seem to form some disordered organisation before the formation of “nuclei”. Then how does the crystalline order emerge from them? “That is a big question!”, explains Takuji Adachi, assistant professor in the Department of Physical Chemistry at the UNIGE Faculty of Science.

Takuji Adachi’s team, supported by two researchers from the Department of Chemistry at McGill University (Nathalie LeMessurier and Lena Simine), has taken a decisive step by succeeding in observing the nucleation process of an individual crystal at the micrometre scale by optical spectroscopy. “We have succeeded in demonstrating and visualising the organisation and formation of molecular aggregates that precede crystallisation”, explains Johanna Brazard, a researcher in the Department of Physical Chemistry.

To observe this phenomenon, the scientists combined Raman microspectroscopy and optical trapping. “We used lasers to highlight the molecular structure during the nucleation but also to induce the nucleation phenomenon and thus be able to observe it and record its spectral imprint,” explains Oscar Urquidi, a doctoral student in the Department of Physical Chemistry. The model substance chosen to conduct these experiments was glycine, an amino acid that is an essential building block of life, dissolved in water.

“Our work has revealed a stage of crystallisation that was previously invisible”, says Takuji Adachi. “Visualising more precisely and better understanding what is happening at the molecular level is very useful for directing certain manipulations more effectively.” In particular, this discovery could make it easier to obtain purer and more stable crystal structures for certain substances used in the design of many drugs or materials.