Non-linear techniques for the XUV 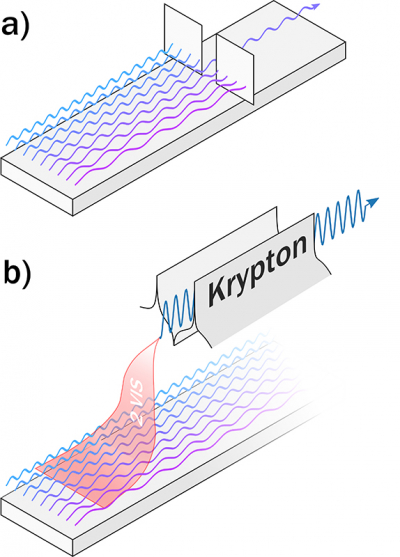 Researchers from the Max Born Institute for Nonlinear Optics and Short Pulse Spectroscopy (MBI) have developed a new method to modify the spectral width of extreme-ultraviolet (XUV) light. By employing a novel phase-matching scheme in four-wave mixing, they can compress the spectral width of the initial broadband light by more than hundred times.

Non-linear optical techniques have made it possible to change the wavelength of light and modify its spectral bandwidth without compromising the intensity. As illustrated in Figure 1, this enables the generation of light with a specific colour from broadband light or vice versa. These techniques are widely applied in spectroscopy, imaging and for the generation of ultrashort laser pulses. However, non-linear optical techniques are not readily available in the XUV region of the electromagnetic spectrum. This region is of increasing interest for various applications, including attosecond science and EUV lithography.

A team of researchers from the Max Born Institute has recently demonstrated a new concept to generate narrowband laser pulses in the XUV range. They combined broadband white light in the visible region with light having a broad spectrum in the vacuum-ultraviolet (VUV) region. After both of these light pulses simultaneously propagated through a dense jet of krypton atoms, a new laser pulse in the XUV range was generated. Remarkably, the spectral width of the new XUV pulse was more than hundred times narrower compared to the initial visible and VUV pulses.

The scientists employed a scheme known as four-wave mixing, where one krypton atom absorbs two visible photons and one VUV photon, leading to the emission of one XUV photon. Due to energy conservation, the emitted XUV photon must have a frequency equal to the sum of the frequencies of all three absorbed photons. At the same time, due to momentum conservation, the velocity of the incoming light wave has to match the velocity of the outgoing wave inside the mixing medium. This velocity changes very fast close to an atomic resonance.

To generate the narrowband XUV laser band, the researchers chose a VUV spectral range quite far away from any resonance and a target XUV range between two resonances. In doing so, they were able to match the velocities of a broad range of incoming wavelengths to a narrow region of outgoing wavelengths. In Figure 2, on the left side, absorption in the VUV over a broad spectral range (blue area) is indicated. The red dashed curve indicates the frequency-dependent refractive index, which is a measure of the light velocity. On the right side, a narrow spectral region in the XUV range (violet area) is shown. In these regions, the light travels approximately at the same speed, i.e., with a similar refractive index. These velocities can be matched by the near-horizontal arrows indicating the photons in the visible spectrum. The illustration shows that this allows converting a broadband VUV spectrum with a relatively flat wavelength-velocity dependence into a narrowband XUV pulse, where the wavelength-velocity dependence is near vertical. 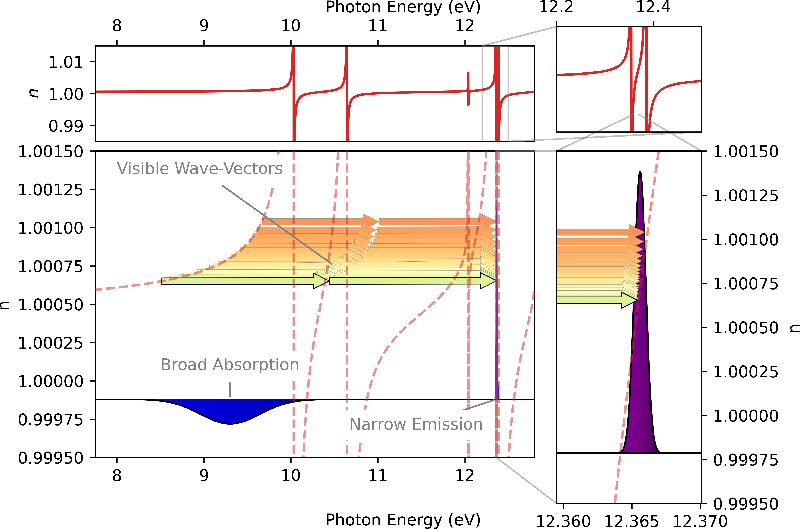 Figure 2. XUV spectral compression scheme. The refractive index as a function of the photon energy is shown by the red dashed curve. In the region around 9.2 eV it changes comparably slowly (left side), whereas it changes very fast in the region around 12.365 eV. Therefore, a broadband absorption (blue area) can lead to a narrowband emission (violet area) with the help of two visible photons (shown by the arrows).

The generation of narrowband XUV pulses is interesting for applications such as electron spectroscopy, the investigation of resonant transitions and the coherent diffractive imaging of nanoscale structures. In the future, the new method could also be used in the opposite direction, i.e., to spectrally broaden XUV pulses, which may result in the generation of very short XUV pulses from sources such as free-electron lasers and soft-X-ray lasers.