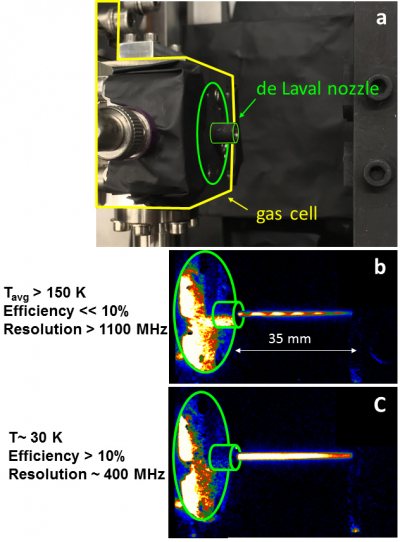 Laser spectroscopy experiments have been used for the first time to obtain a thorough understanding of the atomic and nuclear structure of the short-lived heaviest atoms at the far end of Mendeleev’s periodic table. “The vast majority of the actinide and transactinide elements do not occur in nature and are difficult to produce artificially in weighable quantities”, says Iain Moore, Professor at the University of Jyväskylä. “Performing spectroscopy of these elements therefore necessitated the development of a new, extremely sensitive and accurate technique based on laser ionisation spectroscopy of radioactive atoms in a gas jet moving at supersonic velocities”, he adds. This new technique has been applied to study the nuclear structure of actinium atoms produced at the LISOL (Leuven Isotope Separator On-line) facility in Louvain-la-Neuve, Belgium. The work has been published in Nature Communications.

Actinium, with 89 protons, is the first and eponymous element of the actinide group. It has only one long-lived isotope (227Ac with a lifetime of 21.8 years) limiting our knowledge of the atomic transitions in this element, and thus making laser spectroscopy experiments very difficult. At the cyclotron in Louvain-la-Neuve, actinium atoms were produced in a nuclear-fusion reaction by bombarding a thin gold foil with neon nuclei. The actinium atoms were then stopped in the surrounding argon gas and transported in the cold supersonic jet of a “de Laval” nozzle, a miniaturised version resembling the exhaust of rocket engines, towards a laser interaction zone. In such conditions, resonance laser ionisation is used to ionise the atoms and perform spectroscopy studies. Pure ion beams of actinium are finally separated according to their mass to gain isotopic selection and are electrostatically guided to a detector array. “With this new technique, which is generally applicable, the spectral resolution is improved by more than an order of magnitude without loss of efficiency, and detailed experiments now become possible on nuclei produced at a rate of only one atom every ten seconds”, says KU Leuven scientist Dr Rafael Ferrer, who led the experiment.